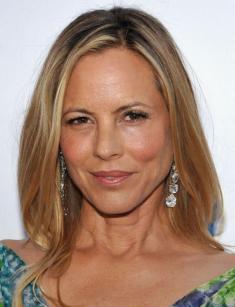 The creative biography of the American actress Maria Bello developed slowly but surely. There are new and failed, exciting and calming but interesting movies in her filmography.

Maria Elena Bello was born in April 1967 in Norristown, Pennsylvania. Besides her, her mother Kathy and father Joe raised a daughter Lisa and sons Christopher, Joseph. The children grew up in a working-class Roman Catholic family. Maria went to Archbishop John Carroll High School in Radnor, after which she began to study political science at Villanova University, planned to become a lawyer.

However, she took a course in acting last year. Bello felt that life in other people's images is more interesting than the dry letter of the law and decided to try her hand in the Broadway production, additionally ending at New York theatre school. Maria had the role in the play The Killer Inside Me, and others.

In 1995, the aspiring actress moved to the center of the film industry – Los Angeles. Mary received the first role in television series The Commish, Due South with Paul Gross, Nowhere Man with Bruce Greenwood.

Bello caught the eye of directors after a successful role in the drama Mr. & Mrs. Smith. Maria played a couple of spies with Scott Bakula, who are forced to portray spouses. At the same time, the relationship in the duet is not good from the beginning but the task of the secret organization "Factory" must be performed.

After the imminent closure of the project, Bello moved to the third season of the series ER, in which she appeared in episodes in the image of a pediatrician. Her character became the main character in the fourth season. Dr. Anna Del Amico went to another city after a conflict with the hero of George Clooney and after the failed affair with Noah Wyle. The cast of the series received the Screen Actors Guild Award for Outstanding Performance.

She played the main character Mária Kitty in the biopic movie Permanent Midnight. Ben Stiller's character tells Bello how he managed to get rid of the drug dope and become a favorite writer and screenwriter, earning thousands of dollars a week.

In 1999, Maria had the luck to play in the action movie The Accountant, in which the actress had a chance to meet with Mel Gibson. Bello played a girl of easy virtue, working for a crime syndicate. Gibson's character tries to knock out money from the bandits and the heroine of Maria helps him in it.

A year later, the actress appeared in the film comedy Coyote Ugly, based on the autobiographical story of the writer Elizabeth M. Gilbert. Her bestseller Eat Pray Love formed the basis of the famous melodrama with Julia Roberts in the main role. The following movie Duets, despite the presence of Gwyneth Paltrow and musical fullness, failed at the box office.

In 2003, Maria received the Golden Satellite Award and was nominated for a Golden Globe for her role in Wayne Kramer's Brake. The company of Bello on the set was Alec Baldwin and William H. Macy, Paul Sorvino.

She was also nominated for a Golden Globe, as well as for the Critics' Choice Movie Award two years later for the image of the hostess dinner in the thriller David Cronenberg A History of Violence, whose husband is not the one for whom he gave himself.

The film is about a former gangster defending a new life, which was awarded by the American Film Institute, the performers of the main roles were nominated for the Golden Globe, Oscar, and BAFTA Award. Bello will meet later in the movie The Yellow Handkerchief with William Hurt, who played the leader of the gang.

Candidates for various awards were the satirical drama Thank You for Smoking and Oliver Stone's disaster film World Trade Center about the events of September 11, 2001, in which Maria received main roles.

The actress became the wife of Johnny Depp on the screen in the thriller Secret Window, who suffered from a creative crisis. Moreover, there is a strange man, who claims that the last story of Rainy is plagiarism and demands to pay for the idea. The melodrama Flicka told about the girl, who fell in love with a wild horse. The parents of the little heroine do not like the secure attachment of the child.

In 2008, Bello replaced Rachel Weisz in the blockbuster The Mummy: Tomb of the Dragon Emperor. Brendan Fraser played her husband-researcher.

Back on television, Maria played the main role of a homicide detective in the police procedure Prime Suspect. It is an American version of the eponymous British series featuring Helen Mirren, Oleg Menshikov. Unlike the original, the movie of Peter Berg did not find a full response of the audience.

In 2014, the approval of the Academy of Science Fiction, Fantasy & Horror Films earned another film, in which Maria Bello starred, as well as Hugh Jackman, Jake Gyllenhaal in the thriller Prisoners.

In 2013, it was known that the miniature blonde (Maria's height is 5,4 feet (165 cm), weight 121 lbs (55 kg)) does not like men. Bello made a coming out by publishing an article in The New York Times about her relationship with the journalist Claire Mann. In 2001, the actress had a son Jackson Blue from the civil husband, Dan McDermott.

The father of the child is also an actor, who is familiar to viewers by roles in the series Star Hunter, La Femme Nikita, Friday, The 13th, Slasher. Maria puts on "Instagram" the photos of family members. She duplicates significant photos with comments on "Twitter."

In 2015, Maria released the book "Whatever...Love Is Love: Questioning the Labels We Give Ourselves", in which she told how she came to understand herself and urged not to adjust people to the standards.

In October 2017, the hundredth, the series of horror films The Walking Dead was released, which became the first in the new 8th season. Maria, a fan of the series, asked a friend of the producer to find her a role in it. Perhaps the film will have the character Alpha, the leader of the Whisperers. It is a caste, living among the dead and its members are stripped from the corpses of the skin not to be disclosed.

Maria Bello has a net worth of $8 million.

In February 2018, there was the premiere of the fantasy drama Every Day, about a certain disembodied spirit named A, which moves to a new body. Having fallen in love with the teenager Rhiannon, the soul alternately resides in the bodies of the people around the girl. The invader involuntarily feels a mystical connection with her and hopes that the suddenly flared feeling can become mutual. Maria Bello got the role of the mother`s Rhiannon in the movie.