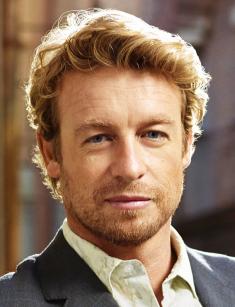 These roles brought the actor Simon Baker nominations for Emmy and two statuettes of Golden Globe Awards. In 2003, on his native green continent, the actor was titled as Courageous person of television, and ten years later Baker was invited to join the Academy of Motion Picture Arts and Sciences.

The future actor was born in the summer of 1969 in the Australian state of Tasmania in a family that was far from the world of theater and cinema. Simon's mother taught children English, and his father worked as a gardener and mechanic. After the divorce of the parents, his mother married for the second time. Simon often used his stepfather's surname, Denny, as a second native.

The first three years of the Australian star's life took place in Launceston. And in 1972, the family in search of work moved to the city of Ballina.

As a teenager, Simon became interested in water polo and surfing and had reached considerable heights in this field. But the young man chose not sports but medicine, and in 1986, after graduating high school, he went to Sydney and entered a medical college. In the Australian capital, Simon Baker tried himself on the set.

The talented young man with a star appearance was quickly noticed, and after the audition he was offered his first role. However, he hadn't got a medical education, as the work at the studio took all his time and gave no opportunity for studying.

At the age of 26, Baker immigrated to America, hoping to make a career in Hollywood. And that was not in vain. In the US, Simon's film career has developed in the best way.

For the first time, the actor appeared on the screen at the end of the 1980s. In the credits of the Australian melodrama Home and Away and Heartbreak High he was listed as Simon Denny.

In Los Angeles, after casting, he starred in neo-noir-drama called L.A. Confidential. The director Curtis Hanson invited Russell Crowe, Kim Basinger, Kevin Spacey and Guy Pearce to play lead roles in the project. Simon got a bright role of Matt Reynolds which opened for him the door to Hollywood.

After the series was released, film directors willingly offered Baker roles in their projects, and he hardly managed to work first on one set and then on another. During the first five years of his stay in the Hollywood Hills, Simon Baker starred in six projects, and the most successful are the fantasy Red Planet with Val Kilmer in the lead role and the series The Guardian.

That film brought Baker fame. The actor was nominated for his first Golden Globe Award. The Australian actor appeared as a key character, the lawyer Nick Fallin, in three seasons of the series. The project is notable for the fact that Simon Baker made his debut in it as a director, producing one of the series.

In January 2004, Alan Brown's drama Book of Love premiered. Simon Baker appeared in the lead role opposite Frances O'Connor and Gregory Smith. The following year, the actor appeared in the thriller The Ring Two by Hideo Nakata opposite the owner of two Oscar nominations, Naomi Watts, and in the post-apocalyptic horror Land of the Dead by George Romero.

However, the main project of the mid-2000s was David Frankel's comedy-drama called The Devil Wears Prada. Simon Baker starred opposite Meryl Streep and Anne Hathaway. The film was a great success, and its participants were nominated for major film awards. Streep was awarded an Oscar.

In 2007, a comedy with fantasy elements called Sex and 101 Death premiered. There, the actor starred opposite Winona Ryder. The actress played a serial killer. The director Daniel Waters presented the film at the Seattle International Film Festival and received the award. However, the film received negative reviews on the website Rotten Tomatoes.

The real taste of fame Simon Baker experienced after the release of a detective-drama series The Mentalist on the CBS channel. Millions of viewers kept watching the actions of a psychoanalyst Patrick Jane, Baker's character, who sought revenge for the murder of relatives by a maniac. The series was released from 2008 to 2015.

In 2009, for his work in the series, the actor was nominated for Golden Globe Award and Emmy. Simon Baker has directed five episodes out of the 151. The project brought actor a star on the Walk of Fame. While working in the series, the actor also appeared in the comedies Women in Trouble, I Give It a Year and thrillers The Killer Inside Me and Margin Call.

The blonde native of the Green continent is a recognized sex symbol. In 2012, the Swiss watch company Longines called Baker Ambassador of elegance, and the following year the fashion house Givenchy chose him as a face of fragrance Gentlemen Only.

The star has millions of female fans around the world, but Simon Baker's heart is busy, he's married to Rebecca Rigg. They got married in the early 1990s. In 1993 Rebecca gave birth to their daughter Stella. Five years later, the family had a son Claude, who was lucky to have Naomi Watts as a star godmother.

In 2001, the Baker family had a new member. Stella and Claude had a brother Harry, whose godmother was Nicole Kidman, Simon's compatriot.

After filming in The Mentalist, the actor took a break for two years. He returned to acting in 2017. Simon cherished the audience with a wonderful sports drama Breath, in which he acted as a screenwriter, producer, director, and actor. The movie was shot in the star's homeland, in Australia. The lead roles were played by Baker, Elizabeth Debicki and Richard Roxburgh.

In 2018, it was announced that Baker was starring in the musical melodrama Here and Now and would soon appear on the screen opposite Renée Zellweger and Sarah Jessica Parker.