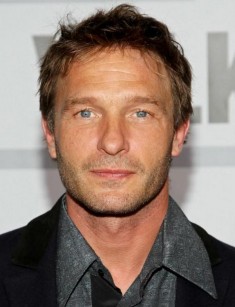 The German actor Thomas Kretschmann has come to cinematography from big sports: in his young years, he was a professional swimmer. But at the age of 25, the destiny gave him a chance to connect his life with a creative career. He received his first roles on the screen in German series, then he appeared in European movies, and since the beginning of 2000 he lives in the USA and is actively engaged in Hollywood. Such pictures with the actor's participation as Roman Polanski's Pianist, Bryan Singer’s Operation Valkyrie and Peter Jackson’s King Kong are widely known.

Thomas was born on the 8th of September of 1962 in the city of Dessau, East Germany. He didn't know his father (they met only in far 2006, and Thomas was disappointed). The boy was brought up by his mother who gave her surname to the son. Kretschmann was working as a director of the school.

At the age of six Thomas was fond of swimming, and when the child turned ten, his mother sent him to the sports boarding school in the town of Halle where he became to be seriously engaged in his hobby. Since then, by the words of the actor, his childhood and freedom came to an end. He had to work hard to achieve success in the sport.

"I swam 20 km a day for eight years. While other guys ran to the park to see their girlfriends I had to work to train and practice much", - Kretschmann remembers in his interview.

His efforts have been paid off. In several years the teenager became a part of the Olympic team of East Germany. As a member of this team, the young man has not only won many awards and titles but also has beaten the records. Kretschmann graduated from the school and became one of the three best graduates. The professional career awaited for him but unfortunately, Thomas began to have health problems.

Because of the pills which he took to increase the endurance of his body, he began to have pains in his shoulder. The sportsman even had to stop the training at the most inappropriate moment. He didn't want to let his team down and to spend his life taking steroids that's why the guy decided to finish his career in 1979.

"Though I took first places in East Germany, that means I was among the world leaders, I would never become the world champion, and I am sure in it. So, I didn’t need to go on with it ", - the actor confesses.

When Thomas left the sport he found himself at the crossroads: on the one hand, he was enchanted by the desire to become a designer, on the other hand – since childhood he dreamed of becoming an actor. Being a child, Thomas watched all movies with his idol Marlon Brando, and above his bed, there was hung the poster of the picture King Kong of 1933. He decided to take the path of the least resistance and soon the young man already studied at the school of dramatic arts. He was admitted to this school almost at once.

However, it turned out to be not so easy to take the next step. During the examination to Ernst Busch Academy of Dramatic Arts Thomas had to answer the question whether he was ready to serve three years in the army instead of one and a half. Thomas clearly understood that it wasn't a question but a statement and he answered: "Yes, of course." He went home and began to think about the plan of escape from his native country.

The escape which took a whole month has cardinally changed the whole life and biography of Kretschmann. The guy came to Hungary on a tourist visa. From here he got to Yugoslavia on foot. Here he received the passport of Germany which he had requested in advance and set off to Austria, and after this, he crossed the border of Germany. By that time Thomas turned 21 years.

"The main reason for which I escaped from my country was the assurance in myself and individual responsibility. I couldn’t just make up with the fact that the government decided which path I had to take instead of me", - the actor said.

The future actor spent his first years in Berlin on adaptation, the arrangement of the things and part-time earnings. The young man had to go through all these things before he began to study at the school of dramatic arts. In 1987 Thomas was admitted to Schiller Theater – one of Berlin drama theaters which exist since the beginning of the 20th century. Later Kretschmann demonstrated his talents and skills on the stage of Vienna Drama Theater and Hamburg Allee Theater.

The actor had his full-pledged debut on the screen (he had his first small role in the semi-legal movie Westler in 1985) quite in a short time. Thomas at once began with the leading role, though it was the role of the antagonist. He received the role of the seventeen-year criminal in the series Der Mitwisser (1989). This role brought him Wobbly Max Ophüls Prize in the nomination for Best Beginning Actor.

The war movie Stalingrad (1993) became the next remarkable Kretschmann's work. In this movie, the German demonstrated his skills as a profound dramatic actor. His personage is a commander of the elite battalion, Leutnant Hans von Witzland, loses almost all fighters and dies in the crucial battle of World War II.

After Thomas's success, other European directors began to offer him roles in their movies. Due to them, the actor enriched his filmography with the following films – La Reine Margot (France, 1994), Marching in Darkness (Italy, 1996), The Stendhal Syndrome (Italy, 1996). During this period the actor was living in France, Italy, and from time to time visited Berlin. But in a short time another country became his home – at the end of the nineties, he went to the USA to try his chances in hopes that Hollywood would open the doors in front of him.

The destine smiled at him over the ocean and in Los Angeles Kretschmann got acquainted with Lena Roklin – the agent who was working with the actors who later became Thomas's wife and devoted assistant. She promoted his interests in Hollywood. The movie under the title Total Reality released in 1997 became his debut picture.

Due to his role in the blockbuster U-571 (2000) the actor became really successful and popular. In this movie, he worked together with Matthew McConaughey who performed the leading role. The Hollywood beginning actor played the part of the main villain – the German captain Günther Wassner who was opposing to the American seamen. The actor’s appearance in the Oscar-winning movie The Pianist (2002) directed by Roman Polanski strengthened the actor's success. In this movie, the actor again found himself in the war theme and played the role of the Nazi officer Hauptmann Wilm Hosenfeld.

"For me, it was the shortest one, but at the same time the most remarkable and interesting role. It's the movie which marked the beginning of my career in Hollywood ", - Thomas confessed.

The next period of the actor's career was marked by remarkable and famous projects and bright roles: Head in the Clouds (2003), Downfall (2004), Resident Evil: Apocalypse (2004), Next (2007), Valkyrie (2008) and others. The movie King Kong directed by Peter Jackson's picture takes the special place in this list. This movie is a remake of the film of 1933, the one about which Thomas has been dreaming since his childhood.

In 2015 there were released at once four movies with the participation of Kretschmann: Hitman: Agent 47, Avengers: Age of Ultron, The Man in the Box and Emperor. One of the latest works of the actor is the adventure drama Jungle in which the German master of transformation played the leading role together with the star of Harry Potter movies - Daniel Radcliffe. The picture is based on the real events and tells about the fantastic story of survival.

Lena Roklin became the first civil wife of Thomas. The couple pursued the house on the Hollywood hills where before there lived a couple of celebrities - Cher and Sonny Bono. Soon, Lena gave birth to their elder son Nicolas (1998), then their daughter Stella was born (1999). In 2002 their youngest son Alexander was born. But even the children didn’t manage to save their marriage: the couple broke up after 12 years of life together.

After the divorce with Lena the actor had relations with the former Ms. Germany and Ms. Europe Sharmin Shahrivar – the model with Iranian roots. At present Thomas has relations with the model Brittany Rice. In his personal life the German actor adheres to one principle – no official marriages.

The year 2018 was marked by the release of the new movie with the participation of Kretschmann under the title Dragged Across Concrete. At present, the actor is very popular and demanded. His life passes in endless trips between Los Angeles and Berlin, he takes part in the shootings of 4-6 movies during a year and dubs animated series.

Moreover, the celebrity is a regular visitor of secular events and cinematic parties. He takes part in the photo shoots for world-famous brands. He has realized his passion for the design in the creation of his own jeans clothing line.