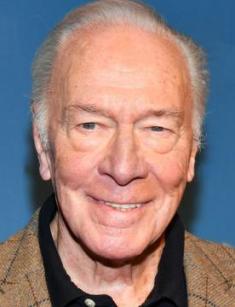 Christopher Plummer is an American actor whose works set a wonderful example for younger artists. Plummer’s roles brought him many prestigious awards, including the Golden Globe and the Academy Awards. The audience admires the actor’s ability to look natural with any state type, from charming antagonists to Mr. Nice Guy from a neighboring house.

The would-be actor was born on December 13, 1929, in Toronto, Canada. The celebrity’s great grandfather was the third Prime Minister of Canada. Soon after the boy was born, his parents divorced, and the mother moved to a suburban area of Montreal, where her relatives helped her raise Christopher.

The boy got used to visiting local theaters: opera, ballet, and plays mesmerized Plummer and made him dream of ovations and lead parts. However, music was the first art for him: the mother insisted her son should learn how to play the piano.

Christopher got his first role at school; he never missed performances. One day, a famous theater critic of that time praised his Mr. Darcy in the play based on Jane Austen’s work. After graduation, the young man joined a troupe of the Montreal theater and traveled across the country, gaining experience and polishing his skills.

In 1954, the actor moved to New York and joined the Broadway troupe. The list of his plays is impressive: Plummer appeared in productions about Henry V and Hamlet, Antony and Cleopatra, Cyrano de Bergerac and King Lear, Macbeth and Julius Caesar. Gradually, the actor earned recognition among directors and theater lovers.

In 1974, Christopher received the prestigious Tony Awards, the theater Oscar, for the Broadway musical Cyrano.

1981 was marked with the role of Iago in Othello based on Shakespeare’s play under the same title. The artist enjoyed numerous favorable reviews. The New York Times critic Frank Rich even called Plummer’s role one of the unforgettable impressions from the theater.

The next Tony Award came in 1997 when the man played John Barrymore, the famous actor of the early 1900s. In 2002, Plummer participated in Broadway’s King Lear; six years later, he was invited to Caesar and Cleopatra.

In 2010, 80-year-old Christopher Plummer proved once again that talent knew no age: he brilliantly personified Prospero in The Tempest.

The artist’s filmography is just as amazing as the list of his theater roles: overall, he appeared in some hundred movies. Many of Plummer’s fans agree that Captain Georg von Trapp from Robert Wise’s The Sound of Music was the brightest figure.

The project was premiered in 1965 and immediately got recognition. According to Plummer, he despised his character: “The devil is more interesting than God”. In other words, the man liked to play antagonists more than “good guys”.

Besides, the movies The Insider (1999) and A Beautiful Mind with Russell Crowe, Josh Lucas, and Jennifer Connelly are worth noticing. In The Imaginarium of Doctor Parnassus, the artist played the main character; another lead part happened in The Last Station about the last year of Leo Tolstoy’s life.

Although Plummer became a successful movie actor, he confessed in his interviews he preferred theater: the “live” audience was more significant, and ovation energy gave him energy and happiness, something that cinematography could never provide.

Christopher Plummer’s personal life has been as rich as his career. The actress Tammy Grimes became his first wife; their daughter Amanda was born in 1957. Unfortunately, the marriage did not last long: the couple divorced four years later.

Amanda followed in her father’s footsteps and became an actress. The man began to communicate with his daughter only when she was an adult; however, their relationship was warm and friendly.

The journalist Patricia Lewis became the actor’s second wife in 1962; they divorced in 1967. Plummer did not spend much time alone and married again in 1970: the dancer and actress Elaine Taylor became his partner. It was a happy marriage: the spouses are still together.

In 2008, the actor presented his autobiography In Spite of Myself: A Memoir Christopher Plummer.

At the end of 2017, the actor became the center of the media’s attention again: he played in Ridley Scott’s All the Money in the World based on a true story about one of the richest people all over the globe.

The main character, J. Paul Getty, is so wealthy that his net worth cannot be estimated. However, the billionaire does not want to share a cent to save his grandson kidnapped by terrorists. Initially, Kevin Spacey was supposed to play him, but the 57-year-old actor would have to wear too much makeup to look like an 80-year-old person while Plummer suited perfectly.