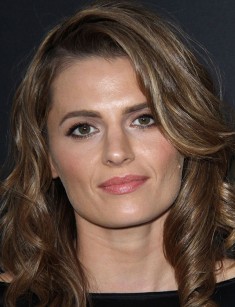 On the 9th of March, 2009 the first season of the detective comedy-drama series Castle was released on the screens of the American TV channels. The Canadian actress Stana Katic who was already known to the audience performed the leading role of Kate Beckett in this series.

Stana Jacqueline Katic ( her name is pronounced as Katik in the English manner) was born in the town of Hamilton (Canada) on the 26th of April, 1978. The unusual name for the hearing of the Americans is connected with the girl’s background: her father came from Serbia, and her mother is from Croatia. The actress considers herself Dalmatian – by the name of the region situated at the crossroads of Croatia and Montenegro. Stana was born in a big family where except for her there were growing up her sister and four brothers.

Stana was very small when her parents left Hamilton to the town of Aurora situated in the State of Illinois, in the USA. There she attended West Aurora High School where she received general secondary education. According to the results of the final exams, Stana entered the top ten of the best students due to her diligence in the mastering of the school program. After she completed her studies at school, Stana entered the University of Toronto – the public research university and returned to Canada.

The girl couldn’t make up her mind about her future profession that’s why she was studying three absolutely different disciplines at the same time - the international relations, biology, and fashion designing. But the girl was obsessed by the burning desire to become an actress and to be recognized. That’s why in a short time she returned to the USA where she entered the private university in Chicago, so-called DePaul University Goodman School of Drama. At De Paul's University Katic was studying dramatic art for four years.

Being a student, Stana received the offer from her acquaintance to play the episodic role in the amateur short-length movie. The girl was captured by the working process in front of the camera in such a way that she decided to become the actress. Taking into account the inclination of Stana to the sciences and studies, she got started with it with determination. At first, she entered the school of the dramatic arts and then alongside with it began to attend the ballet and martial arts classes. Moreover, she visited karate lessons. In the Dance Academy in Canada, the girl was studying the art of belly dancing and plasticity.

In a short time Stana got her first role but at the theater stage at that time. The girl performed a serious part in the classical plays (Romeo and Juliet by Shakespeare), and episodic roles in the plays of the contemporary playwrights.

In 1999 Stana had her debut in cinematography. The girl played the role of Annie in the short-length picture Acid Freaks directed by the Canadian director Philippe Bergeron though this role hasn't brought fame to the beginning actress. However, in a short time, she again appeared on the TV screens in the role of Blaire Collins in the TV series ER.

The actress was waiting for her next role, not for a long time: the TV spectators saw the actress in the part of Lucienne in the crime series JAG. In general, Stana has in her filmography 38 movies and series for the present moment. The following works of the actress are considered her roles in the series Castle, CSI: Miami, The Shield. By the way, after her appearance in the series Castle Stana entered the list of the most popular actresses of the TV series.

The duet with the actor, Nathan Fillion in the series Castle, has brought popularity to the actress. Taking part in this TV series, Stana also tried herself in the role of the producer. Just in a short time before this, the Canadian actress has had an idea to expand the variety of her professional activities, and in 2008 the girl created her own cinematography company called Sine Timore Productions.

Moreover, Katic hasn't left her acting activity: in 2009 the girl took part in the political thriller The Double. The well-known actor Richard Gere has become her partner on the movie set.

The participation of the actress in the melodrama Feast of Love directed by Robert Benton has brought Stana Katic the incomparable and exciting experience. Her heroine Jenny has found her love in the face of another charming girl whose role was performed by Selma Blair. Though Stana has liked the bed scene with the woman, after the premiere of the picture the actress emphasized her heterosexuality. Stana Katic appeared naked in the shot only once - in the movie For Lovers Only together with the man. The actress hasn’t commented on the shootings of this frank scene.

The year 2008 became a successful period in the actress’s career. Stana was working on the same movie set with such Hollywood stars as Samuel L. Jackson, Eva Mendes, Scarlett Johansson and others. Moreover, Katic took part in the film about James Bond even though it wasn't the leading role.

During all the period of the shooting of the series Castle, the journalists persistently discussed that the actress had a love affair with her partner in on the movie set - Nathan Fillion. The actors denied this fact. And in 2015 Stana got married, and it was the last negation of the rumors. The actress's husband Kris Brkljac works as a business consultant. Their wedding was held in quite an isolated monastery in Croatia. The couple invited their relatives and close friends, and there were no journalists at their celebration.

For the wedding, the spouses chose the classical dresses and ordinary wedding rings. Slim Stana (she weighs 61 kilos, and her height is 175 cm) looked gorgeous in the wedding dress, emphasizing advantages of its figure. By the way, according to the mass media, in young years the actress has had rhinoplasty though Stana doesn’t confirm this information.

Rumors about Stana Katic’s pregnancy were discussed in the press since autumn of 2015, though they weren’t confirmed. The couple doesn’t hurry to begin to have children and doesn't share any information about this with the journalists. In her spare time the actress is engaged in the charity activities, she visits art exhibitions and travels. Stana shares her photos from the trips to the exotic countries on her page on Instagram.

Moreover, the actress has in the biography a number of interesting pages which the girl doesn’t often share with the press: Stana has mastered the skills of combat knife art, she can shoot and fence. Besides, she also enjoys diving and equestrian sport. Though, Katic doesn’t prefer to show the details about her hobbies, as well as about her personal life.

The year 2017 was marked for Stana Katic in the shootings in three pictures at the same time. In January there was premiered the adventure melodrama The Tourist in which the actress performed a secondary role. On the 25th of September, 2017 there came out on the TV screens the first episode of the detective series Absentia in which Katic appeared as an FBI agent Emily Byrne who lost memory under some unknown circumstances.

At present Stana is engaged in the shootings of the horror The Possession of Hannah Grace which world premiere is set for August of 2018. It’s noteworthy that the horror genre is something new for the actress. In the picture, the actress performed the role of the nurse Lisa Roberts. 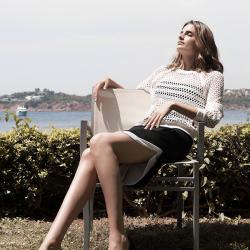