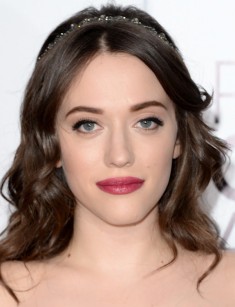 Kat Dennings is the stage name of the American movie and TV actress Katherine Litwack who earned her fame for the roles of Darcy Lewis in Thor and Thor: The Dark World and Max Black in the TV series 2 Broke Girls. She was nominated for the 2008 Satellite Award for Best Actress – Motion Picture Drama and the 2009 MTV Movie Award for Breakthrough Performance – Female.

Katherine Victoria Litwack was born on June 13, 986, in Bryn Mawr, Dolgellau, Pennsylvania. Her parents were Jewish. The mother, Ellen Judith Litwack, worked as a speech therapist and a poet; the father, Gerald J. Litwack, was a molecular biologist, pharmacologist, and college professor.

The youngest among five children, Katherine was homeschooled. She spent only half a day at Friends' Central School in Wynnewood: her clothes were made fun of, and when the girl spelled the word “friend” wrongly, she was scolded. Kat left the children’s center and never came back there.

In 1996, Litwack appeared on television for the first time: it was a potato chip company commercial. At the age of 14, the girl graduated from the middle school and moved to Los Angeles with her family. As soon as Katherine entered the world of the entertainment industry, she started making her childish dreams come true: she changed her name to Kat Dennings. Her career finally began.

Dennings debuted in the series Sex and the City in 2000: she played a nasty Jewish teen girl who hired Samantha (Kim Cattrall) to advertise her Bat Mitzvah (episode “Hot Child in the City”). In 2001-2002, Kat appeared in the WB channel sitcom Raising Dad; she gained the role of Sarah, the 15-year-old girl raised by her widowed father (Bob Saget); Brie Larson played Sarah’s sister, Emily.

In 2002, Katherine received the lead role in the TV Disney movie The Scream Team. As the story runs, the Carlyle siblings fight ghosts to set free the soul of their deceased grandfather.

Dennings succeeded at the auditions for the drama series Everwood; she was supposed to participate in five episodes of the show, yet the administration changed their mind at the last moment and gave the role to Nora Zehetner.

In 2003-2004, the actress played several minor roles in TV projects: Without a Trace, Less than Perfect, and CSI: Crime Scene Investigation. In 2005-2006, Dennings played Zoe Butler in several episodes of ER broadcast by NBC.

In 2004, the actress debuted on the big screen: it was the melodrama Raise Your Voice. Kat got the role of the main character’s friend, Sloane. The next year, she took part in the comedy The 40-Year-Old Virgin and Down in the Valley that was presented at the Cannes Film Festival.

Gradually, Katherine had more large roles in her filmography. She personified the main character in the movie Charlie Bartlett; in a while, she played in the comedy The House Bunny starring Anna Faris and Emma Stone. The role of Norah Silverberg in the teen movie Nick and Norah's Infinite Playlist brought the Satellite Award nomination.

In September 2008, Katherine wanted to work on the screen version of Don DeLillo’s novel End Zone about nuclear war. Sam Rockwell and Josh Hartnett were interested in the project as well, yet the movie was not made because of the controversial topic.

In 2009, Kat appeared in the romantic comedy about the famous author whose manifests made a kind of the new Bible: The Answer Man. The same year, the woman played the main characters’ elder sister in Robert Rodriguez’s children’s movie Shorts.

At the same time, Kat Dennings and other rising stars shot for the August issue of Vanity Fair. The photo session participants played the scenes related to the movies about the epoch of the Great Depression. Katherine personified the character from Sydney Pollack’s 1969 movie They Shoot Horses, Don't They?

In 2009, the artist joined the cast of the Canadian superhero movie Defendor starring Woody Harrelson and Sandra Oh. The next year, Kat got the lead role in the independent project Daydream Nation. She personified a young woman who moved from a big city to a weird town and found herself in a love triangle with a middle school teacher (Josh Lucas) and a teen drug dealer (Reece Thompson).

In May 2010, Dennings collaborated with her old friend Robert Rodriguez and participated in Rob Schneider’s music video “40 Dogs (Like Romeo and Juliet).”

In 2011, Katherine joined the Marvel Studios star cast and participated in Kenneth Branagh’s Thor. She played Darcy Lewis, Jane Foster’s (Natalie Portman) shy friend and her technically savvy assistant. Dennings said she was excited to have been the stage partner of Chris Hemsworth, Tom Hiddleston, and Natalie Portman.

The movie came out in 2011. The cooperation with Marvel continued in the second part of the superhero blockbuster, Thor: The Dark World.

After the success in Thor, the actress signed a contract with CBS and participated in the series 2 Broke Girls. It became the longest project in her career.

The main characters, the waitresses Max Black (Kat Dennings) and Caroline Channing (Beth Behrs), are the polar opposites: the first girl is a rude, pushy brunette who makes the way to the better life by all means, and the second one is a glamorous blonde who is totally unsuitable for the independent life. However, the mutual dream unites them: they want to open their own bakery. Throughout six seasons, the audience watches the girls in comic, awkward situations. Kat worked on the series for six years and left the project in 2017.

In 2001, Katherine Dennings had a blog on her official website Funny Girl. Kat Dennings; in 2011, it turned into a YouTube vlog. Those who followed the actress’s publications saw the woman as a passionate book and movie lover. There was a post where Kat confessed she was crying when she was watching the melodrama Only You. It was not the romantic plot that touched her – Kat wanted to have as small breasts as Marisa Tomei’s.

Dennings’s shapes are fascinating: her height is 164 cm., her weight is about 70 kg., and the body sizes are 92-69-97. The woman often chooses clothes with low neck; she looks pretty in a swimsuit. It is not an easy task to imagine Katherine without her trademark make-up: neat wings and bright lipstick that draws attention to the actress’s lips.

Kat is Jew, but she feels like she is connected to this culture more ethnically than religiously.

Kat has many friends; her partner in 2 Broke Girls Beth Behrs and the show creator Whitney Cummings are among them. Kat adores parties, social circuits, and heart-to-heart conversations. The actress loves animals. She has a cat, Milly, who often appears on Katherine’s Instagram.

The woman is not married; she has had many boyfriends. Some affairs are made up by journalists.

In 2005, Dennings was seeing Ira David Wood IV, the brother of the model Evan Rachel Wood. A couple of years later, the artist was seen with Matthew Gray Gubler, the star of the series Criminal Minds.

After the movie Thor, rumors had it Katherine was dating Tom Hiddleston who played Loki; these speculations proved to be false. Because of the actor’s tremendous success, journalists believed he was seeing all the women who accompanied him.

In 2014, Kat had a romance with the American movie and theater actor, singer, and musician Josh Groban. They appeared together at Carouse of Hope in Beverly Hills. The young people looked happy: they were smiling and holding hands. The actress worshipped her boyfriend and believed he was a genius.

However, the relationship lasted only for two years: it was hard for them to overcome their disagreement. According to the couple, it was a mutual decision; Kat and Josh are on friendly terms and continue to care about each other.

Nowadays, Katherine continues to work on movies and TV projects. In 2018-2020, several movies starring the actress will come out: Nicol Paone’s movie Friendsgiving, Matt Spicer’s series Dollface, and the comedy How May We Hate You?

In October 2018, the actress posted several photos from a new western movie on her official website.

Dennings’s personal life is still secret; however, she has been reposting from the Twitter page of the wrestler and musician John Cena much. 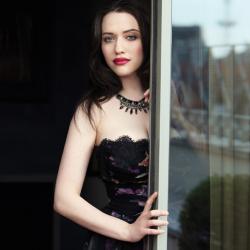