George Soros is an American financier, trader, and investor who also became famous for his philanthropic activities. Soros’s life causes many doubts among people. He is an ambiguous figure: some view him as a noble founder of charity organizations while others call the speculator who is to be blamed for currency crises.

György Schwartz was born on August 12, 1930, in Budapest. The future investor was born into a middle-class family of the Jewish origin. The father, Tivadar Soros, worked in the legal field and tried to publish his own magazine in Esperanto which was not very popular. Tivadar participated in the First World War and managed to come back to his native city, Budapest, three years after he had been captured in Siberia.

For this reason, the father taught his son how to survive in the first instance. The mother, Elizabeth, did not see the horror of the war and saw the world positively; she introduced art to her son. Young Soros liked painting and drawing. Besides, George was good at learning languages: he spoke his native Hungarian, English, German, and French. The young man was fond of sailing, swimming, and tennis. From an early age, George was always winning when he played Monopoly with his friends.

Classmates remembered the future financier often behaved audaciously and provocatively; he loved fighting. Above all, Soros was a good talker and could protect his beliefs at any cost. As for the academic performance, George was an average student: he could show incredible results and soon become a C student.

Soros was younger than 10 when the cruel, bloody Second World War began. Millions of the Hungarian Jewish feared they could share the fate of their people from other European countries. Hiding became the lifestyle of the Soros family. They could spend weeks in basements; at best, they sheltered in ground floors or attics of their friends’ houses when they were allowed.

At that time, Tivadar Soros was falsifying documents, although he could be executed for that. Thanks to his activities, his family and other Jewish people were saved. In fall 1945, when there was no threat, George went to school again. However, the life in the constant fear influenced the young man wanted to move to the West and leave Hungary. In 1947, 17-year-old George began to implement his plan, alone. He had some financial help from his father and aunt who had settled in Florida, though.

At first, George went to Bern, Switzerland; later, he moved to London. He found occasional jobs: a waiter in a restaurant, an apple harvester at a farm, a painter. In 1949, the young man entered the London School of Economics and graduated on an accelerated basis. For one year, he was the school student formally: Soros got his diploma only in 1953.

The education could not guarantee employment. Again, George had to take odd jobs. At that time, the future billionaire realized he needed to enter the investment business. Soon, George got hired as a clerk in the bank Singer and Friedlander. In 1956, the beginning investor felt it was time to move to New York.

In New York, George purchased stocks in one country and reselling them in another (international arbitration). In 1963, when the USA introduced the additional tax on foreign investment, the financier believed this business was not beneficial enough and stopped it.

Several years later, Soros worked as a vice president of Arnhold and S. Bleichroeder; in a couple of years, the man became the administrator of the fund Double Eagle founded by Arnhold and S. Bleichroeder. In 1973, Soros left his employer and created his own company, Quantum. Jim Rogers became his younger partner; the Double Eagle investors’ assets were used during the new fund organization.

The fund Quantum specialized in currency, stock, and exchange commodity speculation. By the late 1980s, George Soros’s fortune was more than $100 million.

Soros and Rogers’s fund was successful in the long run, but there were some failures as well. For instance, in 1987, Black Monday occurred: it was one of the most painful stock market crash in the entire history. George ordered to close the current positions and use cash. Before this decision, Quantum had the 60% annual benefit; however, in 1987, the company not only failed to benefit but ran at the 10% deficit.

September 16, 1992 was a significant day in George’s career: the pound sterling crash happened. The businessman earned more than $1 billion at that time; sometimes, Soros is said to be one of those market players responsible for that.

At the end of the 1990s, the billionaire favored Russia and even ran a business together with the Russian entrepreneur Vladimir Potanin. They purchased 25% of OAO Svyaz'invest stock; after the 1998 crisis, they lost half of the value. Later, George Soros called it his worst investment.

The older the man was, the less he was interested in investment and trading; he paid more attention to charity work. In 2011, he announced his investment fund finished its work. From that time, Soros started doing financial operations to increase his own capital and his family’s wealth.

George Soros’s fund the Open Society Institute was created in 1979. The billionaire’s funds were organized in several dozens of countries. His company The Soviet–American International Cultural Initiative operated in the USSR; however, it was closed due to the high level of corruption.

At the end of the XX century, Soros spent some $100 million on the Russian project on University Internet Centers. 33 universities gained high-tech Internet centers thanks to Soros. For many years, the Open Society Institute gave grants for cultural and scientific workers; the payment stopped in 2004.

In 2015, Soros’s fund was included in the blacklist of organizations in the Russian Federation; nowadays, it cannot operate in the country. Still, a wide range of charity and non-commercial funds created with Soros’s assistance continue to work.

In 2017, George Soros’s fortune was estimated at $25,2 billion. Some investors believe that Soros has a unique ability to predict financial situations; others view his achievement as the result of using secret inside information.

The billionaire created the theory of fund market reflexivity: he explains his success by that. The man described his opinions on the financial environment in several books: The Alchemy of Finance, The Crisis of Global Capitalism, The Bubble of American Supremacy: Correcting the Misuse of American Power, and others.

Annaliese Witschak became George Soros’s first wife; they spent 23 years together. The man’s second wife was Susan Weber who was 25 years younger than her husband; they married in 1983. Susan was an art critic in New York. This marriage lasted for 22 years.

After the divorce with Susan, the billionaire was dating Adriana Ferreyr, the popular star of the Brazilian television. However, Soros did not marry the Latino American beauty. After the break-up, the woman sued him and demanded $50 million in compensation for harassment, moral damage, and assault.

The present-day pictures of George Soros show this man is leading an active life despite his age. The new marriage proves that: in 2013, George married the 42-year-old BAA salesperson and yoga instructor Tamiko Bolton. The wedding ceremony took place at the Caramoor Center for Music and the Arts; 500 guests were present.

The billionaire has five children from the first two marriages: the sons Alexander, Jonathan, Gregory, and Robert and the daughter Andrea. Some children followed in their father’s footsteps: Jonathan used to work in his investment fund and founded his own company later.

George Soros’s biography has often been the subject of rumors and gossip. For instance, in 2016, rumors had it the billionaire died. The same year, Ukraine reported the financier’s secret visit: Soros allegedly wanted to use the country to destabilize the Russian economy. Such “facts” remain speculations; there has been no supporting evidence whatsoever. 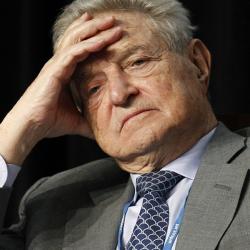