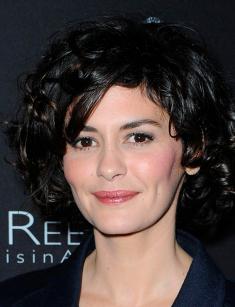 Audrey Justine Tautou is a French actress who played the leading roles in the films Amélie, Coco Before Chanel, The Da Vinci Code. Audrey was born on August 9, 1976, in the French town of Beaumont to Bernard Tautou, a dentist, and Eveline Tautou, a teacher and member of the Association that fought against illiteracy. Audrey also has younger siblings.

The parents loved their children and gave them sweet nicknames. Her father suggested calling Audrey “a droplet” or “fawn” for her big eyes and a delicate figure (Audrey is 5.25 ft. (160 cm) tall, weighing 103.61 lbs. (47 kg)). From an early age, the girl studied zoology and planned to become a primatologist. But the fascination with monkeys and studying at the Lyceum did not prevent Audrey from finishing the music school where she learned to play the piano and oboe. During her school years, the girl also attended a theater group.

At the age of 17, she moved to Paris where Audrey attended the acting lessons at the Cours Florent and studied philology at the Sorbonne. Then she finally decided to become an actress. The young woman began to work as a secretary and every day went to auditions.

Audrey Tautou made her acting debut in the mid-90s, when the aspiring actress got a role in the first TV movie Cœur de cible, after which she also appeared in several TV series and short films: La Verite est un vilain defaut, Les Cordier, juge et flic, La vieille barrière, Bébés boum, Casting: Archi-dégueulasse. Audrey played mostly bit parts, but in 1998 she got the role of Tracy in the detective series Julie Lescaut which aired on TF1 for 23 seasons since 1992.

In 1998, the young woman auditioned for the full-length movie Venus Beauty Institute, directed by actress Tonie Marshall. The creators almost refused Audrey Tautou who was late, but she burst into tears so sincerely that the director gave her a chance to audition. Soon, the girl was cast in the role of Marie. The romantic comedy earned the creators several movie awards, and Audrey Tautou won the first César Award for Most Promising Actress.

In 1999, the drama Pretty Devils premiered, starring Audrey Tautou. The woman portrayed the heroine, Anne-Sophie, who dreamt of revenge on the former lover and found two friends who could help her to realize what she had planned. The same year the short film Triste à mourir was released, in which the beginning actress got the role of a young woman, Caro.

After a few films (Le Libertin, Happenstance, Épouse-moi), Tautou played the leading role in the 2001 movie Amélie, which was a turning point in her acting career. Director Jean-Pierre Jeunet originally wrote the part of unusual girl Amélie for the English actress Emily Watson who already appeared in Lars von Trier's film Breaking the Waves. But the Englishwoman refused to work in France, and the creators had to look for another actress.

Looking through photos of novice actresses, the director did not hesitate to choose young French Audrey Tautou. The film was so successful that it gave rise to real obsession. Fans of the melodrama named their newborn daughters after the favorite heroine, and the Café des 2 Moulins in Montmartre, where waitress Amélie worked in the story, became a cult place.

In the USA, the French film was nominated for nine Academy Awards. In 2002, Audrey Tautou won the second César Award and the Lumières Award for Best Actress. After the success of this movie, the film God Is Great and I'm Not was released, in which Audrey Tautou portrayed the heroine, Michèle, looking for an ideal religion.

In 2002, Audrey Tautou was invited to play the role of Angélique in Lætitia Colombani’s melodrama He Loves Me... He Loves Me Not. The film also starred Samuel Le Bihan and Isabelle Carré. The same year, the actress joined the main cast of the comedy L'Auberge Espagnole and the thriller Dirty Pretty Things. A year later, the actress appeared in three films of different genres: the drama Les Marins perdus, the musical Not on the Lips, and the comedy Happy End directed by American Amos Kollek.

In 2004, director Jean-Pierre Jeunet invited Audrey Tautou to play in his project again. In the romantic war drama A Very Long Engagement, the actress got the title role of Mathilde, the bride of the soldier, Manech, who was court-martialed during World War I and then missed in action. The young woman sets out in search of her beloved man. Audrey Tautou was nominated for the César Award for Best Actress.

In 2005, Audrey appeared in the romantic comedy Russian Dolls (the sequel to the film L'Auberge Espagnole). One year later, Tautou’s filmography included the Hollywood thriller The Da Vinci Code, directed by Ron Howard and based on the novel by Dan Brown. Tom Hanks and Jean Reno were also invited to play the leading roles. The movie grossed $147 million in its worldwide three days. But the film met with opposition of religious groups, and film critics called it boring.

The same year, director Pierre Salvadori released the French comedy film Priceless with Audrey Tautou and Gad Elmaleh in the lead roles. The story shows Jean, a waiter at a luxury hotel, who is mistaken to be a millionaire by Irène, a gold digger. The film was marked with a PG-13, which meant that it could show nude scenes. The movie grossed $20 million worldwide.

In 2007, the actress joined the main cast of the drama Hunting and Gathering directed by Claude Berri, in which her partners on the set were Guillaume Canet and Laurent Stocker. The young people begin to live together in an apartment, where they get the necessary warm care that they did not have in their families.

In 2009, Audrey Tautou played the significant role of Gabrielle 'Coco' Chanel in the biopic Coco Before Chanel, directed by Anne Fontaine. The drama won the Academy Award for Best Costume Design, and Audrey Tautou was nominated for the BAFTA and César Awards. After the premiere of the film, the Chanel perfume company signed a contract with the actress to shoot in its commercial for the perfume, Chanel No. 5. Hollywood star Nicole Kidman had been its face before.

Audrey Tautou portrayed the heroine Émilie in Pierre Salvadori’s comedy De vrais mensonges (Beautiful Lies) in 2010. The film tells about a young woman who receives an anonymous love letter and passes it on to her mother. One year later, Audrey appeared in the romantic comedy Delicacy about the relationship between two colleagues, Nathalie and Markus. Her partner was a Belgian comedian, François Damiens.

In 2013, director Michel Gondry invited Audrey to the fantasy comedy Mood Indigo, based on the novel by Boris Vian. Tautou’s heroine suffers from a rare disease: a shell grows inside the girl and destroys her lungs slowly. The film also starred Romain Duris, Gad Elmaleh, Omar Sy. The same year, the French comedy Chinese Puzzle premiered, in which the actress performed the role of Martine.

Audrey Tautou is still not married, and the actress has no children. The Frenchwoman hides the details of her personal life. She does not give rise to rumors, even posting private photos on Instagram.

It is known that during the shooting of the film Amélie, Tautou’s partner, Mathieu Kassovitz, tried to pay court to the young woman, but they did not start a romantic relationship. There were rumors that the actress dated musician Matthieu Chedid for a while.

In 2016, Audrey Tautou appeared in three movies Open at Night, Eternity, and The Odyssey. The actress managed to portray different characters who faced various circumstances in their lives. She played a loving wife and mother, Valentine, in the historical drama Eternity, an assistant director, Nawel, in the comedy Open at Night, and Simone, the muse and wife of oceanographer Jacques-Yves Cousteau, in the drama The Odyssey. In 2017, American director John Turturro is preparing to release the crime comedy Going Places, featuring Tautou.

In April 2017, Audrey Tautou was awarded the National Order of the Legion of Honor, which is considered the highest award of France. So, the actress was given the rank of knight. In addition to shooting, the actress is fond of music, visual arts and photography. For several years, Audrey has performed in the youth orchestra of Auvergne, where she plays the oboe. At the beginning of July 2017, Tautou’s photography exhibition, depicting her collection of self-portraits which were made at different times and places, was shown at the Arles Photography Festival in Paris.

Audrey Tautou has a net worth of $20 million.