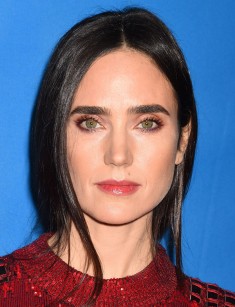 Jennifer Lynn Connelly is a Hollywood star who became famous for her roles in the cult films Requiem for a Dream and A Beautiful Mind. She is included in the lists of the world's most beautiful women.

The future actress was born in one of the neighborhoods of New York City on December 12, 1970. The girl's parents belonged to a high social class. Mother Ilene owned an antique shop, and her father, Gerard Connelly, was a clothing manufacturer. Jennifer’s ancestors were immigrants from Norway, Ireland, Russia and Poland.

Connelly attended Saint Ann's, a private school in Brooklyn. Her father suffered from asthma, so the family had to live in Woodstock to escape the city smog for four years.

When she was ten years old, a family friend, the owner of an advertising company, paid attention to the girl and suggested she audition as a model. Young Connelly participated in fashion photoshoots for glossy magazines, in the filming of commercials. They even invited Jennifer to appear in the music video for Duran Duran. She tried her hand at the music sphere and filmed a video for the song "Monologue of Love," which she sang in Japanese.

After graduation from high school, Connelly entered a prestigious institution, Yale University. The curious girl studied literature, philosophy, painting and theatre arts. Jennifer improved her acting skills under the guidance of the famous legends of the past: Roy London, Harold Guskin and Howard Fine.

The beautiful young woman made her movie debut at the age of 12 in the cult film Once Upon a Time in America. Jennifer attended the auditions, and director Sergio Leone cast her in the role of the young title character. Connelly was lucky to work on the same set with the legends of world cinema: Robert De Niro, James Woods and Elizabeth McGovern. A few minutes with young dancer Deborah became one of the most memorable moments in the film. Two years later, Jennifer was invited to star in two films. They were the mystery thriller Phenomena and the fantasy film Labyrinth.

The second movie was released in 1986. Young Connelly played in a duet with the star of music, fashion and scandalous behavior, David Bowie. Although the musical fantasy film grossed more than $ 10 million, Connelly did not become very popular. Directors liked Jennifer’s exquisite beauty and tenderness, so in 1989 the girl got a leading role in the fantasy Italian story Étoile about the young ballerina again. The young lady traveled to Europe to shoot in the film.

During the 1990s she searched for her path and new images. The variety of films amazes viewers. Playing bit roles, Jennifer managed to show realistic and memorable characters. These are the films Career Opportunities, The Rocketeer, The Hot Spot, Higher Learning, Far Harbor, Mulholland Falls. A significant breakthrough was Connelly’s role in the 1998 sci-fi drama Dark City. For the first year of release, it grossed more than $ 20 million worldwide. Director Alex Proyas combined the detective thriller with science fantasy and created a truly horrible movie.

The young actress reached the stardom after the release of two brilliant films in a row. They were the drama Requiem for a Dream, where Jennifer played with Jared Leto, and A Beautiful Mind, where Russell Crowe became her partner on the set. In Darren Aronofsky’s crime drama, the thirty-year-old actress easily coped with the role of a young girl, a girlfriend of a young drug dealer who got into trouble. For her work in Ron Howard’s biographical film, Jennifer won three prestigious film awards such as the Golden Globe, BAFTA, and Oscar Awards. Later, Jennifer played in a duet with Crowe in two more films. They appeared in the romantic melodrama Winter's Tale and the epic biblical drama film Noah.

In the early 2000s, Connelly continued to film actively. The actress performed the wide range of roles and proved her ability to play various characters in the fantasy fairy tale Hulk, in the drama House of Sand and Fog, in the horror film Dark Water, in the crime melodrama Little Children. The actress received one more Oscar nomination for a role in the adventure thriller Blood Diamond, where Jennifer played along with Leonardo DiCaprio, Djimon Hounsou, and Stephen Collins.

New films that attract the interest of critics and viewers appeared one by one. It is the drama Reservation Road, created by the German and American film companies, the fantasy film The Day the Earth Stood Still, where Keanu Reeves played along with Jennifer, the comedy melodrama He's Just Not That Into You. Movies with Connelly were always box office success.

In the 2000s, the actress became one of the leading Hollywood stars. She acted brilliantly in the films Winter's Tale, Noah, Aloft.

Since youth, the beauty of Jennifer Connelly attracted the attention of other people. Her grace, blue eyes, and a charming smile helped the girl to develop an acting career. The actress manages to maintain the same height (169 cm) and weight (55 kg) till the present day. Jennifer is often confused with another Hollywood stars, for example, Demi Moore, who also has an excellent body for her age.

Connelly was ranked among the most beautiful and sexiest women in the world several times. For the first time, People and FHM Magazines included her in such a list in 2002. In 2008, Glamor magazine, as well as the leading Time, Vanity Fair and Esquire tabloids mentioned Connelly on a similar list.

Few people know that Jennifer’s face was a model for the image of Aladdin’s friend in the Disney cartoon. Jennifer has repeatedly become the face of the leading design and cosmetic brands such as Balenciaga, Louis Vuitton, Revlon, Shiseido.

At the age of 21, Jennifer met Bill Campbell, who played a leading role, on the set of the sci-fi movie The Rocketeer, and they immediately started dating. The young people dated for five years, but these relations did not lead to marriage.

In 1997, the actress and photographer David Dugan had the firstborn son, Kai. The boy's parents did not marry and soon broke up.

Jennifer met her true love only at the age of 28. Since then, the life of the beautiful woman has changed dramatically. While working on the set of the film A Beautiful Mind, the actress met Scottish actor Paul Bettany, whom she soon married.

In the summer of 2003, a son, Stellan Bettany, was born in a creative family, and eight years later, Jennifer gave birth to a long-awaited daughter, named Agnes Lark. The large family lives in New York City, but this does not prevent them from traveling to different destinations of the USA.

The parents and children prefer to spend their holidays camping in tents near the fire. One can see beautiful photos of the family experiencing nature on Instagram. Jennifer starred together with her husband in the film Creation, where Paul played the role of Darwin, and Jennifer played the scientist's wife.

The actress often films. In 2016, the crime drama American Pastoral with the participation of Jennifer was released. Only the Brave is scheduled to premiere in 2017.

Nowadays, Connelly continues to shoot in the post-apocalyptic film Alita: Battle Angel directed by Robert Rodriguez. The fantasy action movie is scheduled to premiere in 2018. 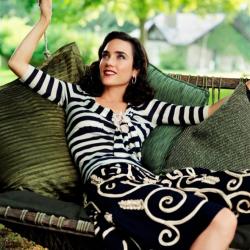