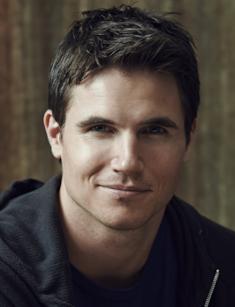 Robbie Amell is considered mostly a serial actor, but this fact is regarded as a step in his career and doesn't belittle his merits. Projects with the participation of a Canadian actor are popular among the audience, noted by critics and, which is important, collect a decent box office.

Robert Patrick Amell is a descendant of Irish immigrants, born in Toronto in April 1988. His ancestors included the founder of the Toronto Eaton Centre Department store chain, the mayor of Canadian Waterloo, and the Vice Governor of Ontario. The closest relatives are Hollywood celebrities, Stephen Amell and Mark Pellegrino.

Although Robbie and his sister as children appeared in commercials on TV, participated in school theatrical life in Armour Heights Public School, he had never thought about cinema as the professional field and saw himself as a hockey player. However, while studying at the Lawrence Park Collegiate Institute, the young man was casting for the role of Carmen Electra's son in a sequel of a comedy Cheaper by the Dozen 2 and, as he says, "got hooked."

The young actor began with episodes in the teenage TV series Runaway with Julian McMahon and Ever Carradine, daughter of Robert Carradine, in a detective Murdock Mysteries, and in a sitcom Life with Derek.

Fantastic series called Alcatraz gave Robbie the opportunity to transform into a character of Robert Foster in his youth. In the drama series Pretty Little Liars, Amell portrayed the older brother of the school leader (played by Brant Daugherty), the organizer of loud parties, charming, but dangerous.

In 3 and 4 parts of the comedy Scooby Doo, an animated talking dog, in addition to Hayley Kiyoko and Nick Palatas, became Robbie's partner. In 2011, the actor appeared in the popular TV series How I Met Your Mother and the police procedure C. S. I.: NY

The psychological thriller Revenge is a film adaptation of the novel by Alexandre Dumas about The Count of Monte Cristo, but Emily VanCamp played the heroine who was eager to revenge. The actress is known thanks to the role of Sharon Carter, agent of S.H.I.E.L.D from the Marvel universe. Robbie got a minor role in the movie.

The first project in which Amell was the lead actor is the series called The Tomorrow People released in 2013. Robbie's character is a young man with the gift of telepathy, moving objects with the power of thought and instantly moving in space. The list of the cast also includes Sarah Clarke, known for fantasy film Twilight, Alexa PenaVega, Madeleine Mantock. Neither the critics nor the audience did not receive positive feedback on the project.

In 2015, the 27-year-old actor played a high school student, the star of the school football team, in the film adaptation of the novel Cody Keplinger called The DUFF. Robbie's character helps the heroine Mae Whitman gain inner confidence and independence from the opinions of others.

Barry Sonnenfeld, the author of Men in Black with Tommy Lee Jones and Will Smith, the Canadian actor appeared in the image of the on-screen son of Kevin Spacey. The head of the family's soul as a result of an accident moves into the body of a domestic cat. But if the second wife and daughter cherish the pet, you need to try to trigger feelings in the heart of the child from the first marriage.

In a fantasy thriller ARQ, Amell got the lead role of the inventor of the eternal source of energy, who trapped in his own device. The protagonist has to make a choice, to transfer the invention to a particular ruling elite, whose plans are unclear, or to hide and use for the benefit of humankind.

Robbie's biography includes such a popular phenomenon as a superhero in comics. It was the character of DC Comics Universe, Firestorm. In the TV series The Flash, the characters of Robbie Amell and Victor Garber are combined into one person as a result of a failed experiment. A new person acquires superpowers, which are used in solving various problems.

On the set of The Flash, Robbie worked with his cousin, Stephen Amell. The last one represented the main character of the series The Arrow, which takes place in the same film universe, as in the picture Robbie. Brothers played the fighters against crime, and in separate series to turn into rivals.

In 2016, the actor's filmography was supplemented by the cult series The X-Files Former performers of the roles of Mulder and Scully, David Duchovny and Gillian Anderson, returned to the workplace, together with Robbie and Lauren Ambrose to play agents investigating strange phenomena.

Attractive appearance is given to Robbie from birth. Moving from models to actors, handsome guy, whose height is 5'11'' (183 cm) and weight is 176,4 lbs (80 kg) only increased the number of fans. However, back in 2008, the actor's compatriot and colleague, Italia Ricci, won Amell's heart. The artists worked together on the comedy American Pie.

In 2016, Italia became Robbie's wife. On a modest by Hollywood standards wedding the couple invited only relatives and friends, including Victor Garber, Carlos Pena, and Alexа PenaVega. The couple doesn't have children yet.

Later, the Amells superheroes family got one more member, as Italia starred in the TV series Supergirl, based on the comic book by DC Comics.

In 2017, the screens out the horror film The Babysitter, directed by McG, who is familiar to the audience of Charlie's Angels and Supernatural. In the movie, always busy parents entrust their son to the care of a cute girl, who turns out to be a follower of the devil's cult. In the film, Robbie appeared to be a friend of a bloodthirsty babysitter and a member of a gang that commits murder.

In 2018, Amell, Alexandra Daddario, and Shelley Hennig starred in the Comedy When We First Met by the Oscar-winning director Ari Sandel. The movie is focused on a guy who was rejected by his beloved, and with the help of a time machine, the protagonist returns to the past to find out where he had made a mistake.

In the same year, Robbie participated in the 2nd season of Netflix show called A Series of Unfortunate Events, which is about three orphans, whose evil guardian is going to pocket their inheritance. Amell's character is an ambidexter Kevin, a member of the freak circus troupe.

Code 8, the science fiction film with Amell brothers in the lead roles, is going to be released in 2019. As producers, Robbie and Stephen collected about $2 million on the crowdfunding site to shoot a film about the confrontation between humans and robots.