Olivia Cooke is one of those actresses about whom people say: she is a self-made person. And it’s true, that girl has gone a long path to the movie set and has proved to everybody that there are no limits for genuine talent.

The future star has begun her biography in a small town of Oldham that in Great Britain. The girl’s parents were far from the show business industry: her mother was working in the sales, and her father was a former police officer. Unfortunately, Olivia's parents broke up rather quickly, and Cooke was growing up together with her sister Eleanor being educated by her mother.

Since early age Olivia was enchanted by the stage: the girl began to have fancy for ballet and rhythmic gymnastics. She with pleasure performed at the school events. At the age of eight, Olivia Cooke became interested in the acting skills and took part in the performances of the local theater. It seemed that the destiny smiled to Olivia's talent — at the age of fourteen, the girl received the invitation to take part in the video of One Direction band and also got episodic roles in the series The Secret of Crickley Hall and Blackout.

In a short time, Olivia has entered the college, having chosen the dramatic arts as her specialty. She couldn’t finish her studies because of the first shootings. Though, some time later she decided to continue her education. She has chosen the Royal Academy of Dramatic Art (RADA). Unfortunately, there Olivia hasn't managed to receive the desired diploma – Cooke hasn’t been accepted to this educational situation.

A less decisive girl on Olivia's place would lose her courage, but Cooke has demonstrated her character and hasn't left her dream about cinematography.

Olivia has been rewarded for her persistence and faith in herself: when the girl hardly turned eighteen. She began her filmography with first serious work in the movie. It was the picture The Quiet Ones in which Cooke has played the major role. This movie was directed by John Pogue which tells about the range of experiments which the orphan Jane had to overcome (Olivia has played the role of Jane). Everything would be okay, but the paranormal powers which the girl had had earlier got out of control because of the cruel experiments.

After the shootings, Olivia repeatedly confessed to the journalists that the movie The Quiet Ones turned out to be an excellent school for her acting skills. This difficult role has helped the girl to show her talent and to believe in her forces. Together with Cooke, Jared Harris, Sam Claflin, Erin Richards took part in the movie.

In 2012 Olivia Cooke received her role in the series Bates Motel due to her efforts. The screen image of the girl has again become very difficult: Emma (such is the character’s name of Olivia) is sick with cystic fibrosis. This series was shot by the motives of the movie Psycho directed by Alfred Hitchcock. Vera Farmiga, Max Thieriot, Freddie Highmore became Olivia's partners in the movie. The series at once conquered the spectators’ love and was prolonged for two seasons, and Olivia began to have thousands of admirers.

Not less popular has become Olivia’s work under the title of Ruby's Skin, where Cooke again performed the role of the girl with the serious disease. Ruby, the character of Olivia reminds the girl with the porcelain skin. However, the appearances are deceptive: such pale skin is the consequence of the dangerous disease because of which the girl can’t go outside. The movie was released in 2014.

Also the year 2014 was noted in the actress’s filmography by the movie The Signal. This fantastic thriller narrates the story about three students who earn additionally by the hacking of websites. Once friends get the message from the stranger who as it appears later follows them. The young people decide to settle a score with this bold one. Though, further events come out of control in a short time. In this movie, Olivia Cooke has played together with Brenton Thwaites and Laurence Fishburne.

The next movie featuring Olivia Cooke was one more thriller. The girl has performed a role in the picture Ouija directed by Stiles White. The movie tells about the situation how the harmless fun with the spiritualistic board can become a source of horror for the jokers who decided to have fun with other forces.

In 2015 Olivia Cooke has one more time performed the role of the fatally sick girl. Me and Earl and the Dying Girl is a touching picture which tells a story of two friends Greg (Thomas Mann) and Earl (Ronald Syler). Having learned about the disease of their friend Rachel (Olivia Cooke), they try to support the girl.

The year 2016 was noted in the actress's career with another sensational premiere: the film The Limehouse Golem directed by Juan Carlos Medina came out on the big screen. The movie has become a screen version of the novel written by Peter Ackroyd. The plot is focused on the mythical being called Golem who consists of clay. Brought to life with the help of the magic forces, Golem starts to kill the inhabitants of London. In a short time, the city reaches the verge of panic. This picture has deserved many positive reviews and has taken the first lines of the world hit movie rates for a long time.

Olivia Cooke’s personal life is not so vivid and saturated as her movie career. Her relations with Alex Rowe became the first love affair of the actress which was discussed by her admirers and the journalists. But, even though the young man was an actor too, the lovers haven’t managed to find the common language and mutual understanding. After some time the young people separated.

In 2015 there began to appear the joint photos of Olivia Cooke and Christopher Abbott on Instagram and other social networks. In short time information about their relationship was confirmed – Christopher became Olivia's new partner. This relationship turned out to be happy and sincere.

At present Olivia Cooke is working on the new project: the premiere of Steven Spielberg’s movie under the name Ready Player One has already been announced. This movie will take the spectators to the nearest future. In 2045 the overpopulation of the planet will come to the extreme point, and people will be interested not only in money and simple pleasures. And only the computer game called will be a true oasis for everybody and will give a chance to distract attention from the unattractive world around.

The game is remarkable also because its creator has left in the virtual reality so-called secret which solution will earn a lucky man a huge sum of money. Certainly, there appear the daredevils who are ready to risk to find out the secret. In the beginning, the movie has been set for 2017. However, in a short time, it has been postponed till March of 2018. 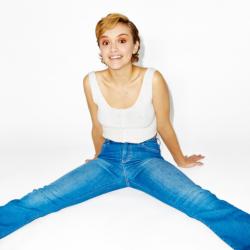