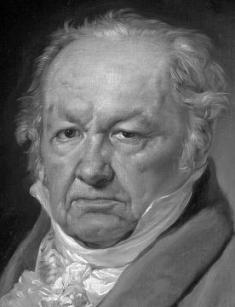 The Spanish painter Francisco Goya followed high humanist principles in art and life. He created the historical portrait of his home country and contributed to the international culture substantially as one of the brightest romanticists. His works impress with a variety of genres; today, they are exhibited worldwide, and art lovers gladly admire Goya’s masterpieces in person or on the Internet.

Francisco José de Goya y Lucientes was born on March 30, 1746, in Fuendetodos. The middle-class family had to move there from Zaragoza because the old house needed repairing.

The future genius was the youngest child. The eldest brother, Camilo, became a priest, and the middle brother, Tomás, followed in his father’s footsteps and became a gilder. The children’s education was ordinary.

One day, the young man had to leave the town and hide from the possible chase; he went to Madrid. Goya was not upset about leaving the workshop; the teacher, who had recommended him to go further, did not try to hold him back. Soon, Francisco tried to enter the Real Academia de Bellas Artes de San Fernando but failed and went traveling.

Goya visited Rome, Parma, and Napoli. In 1771, the City of Parma awarded him the second prize; there is no information about the first one. The success helped the young talent believe in himself: the academicians in Madrid undermined his self-confidence with their silent treatment.

As long as Goya returned to Zaragoza, be started painting church frescos professionally. He worked on the decoration of the Sobradiel Palace and Basílica del Pilar and received much appreciation that inspired him to go to the capital again. The painter began to create the tapestry cartoons for the Royal Tapestry Factory.

With Bayeu’s assistance, Francisco got an important order from Count of Floridablanca on January 22, 1783. The artist could not believe it: the portrait of a high-ranking nobleman would give him a lot of money. However, the consequences exceeded the expectations: the count introduced Goya to the upper-class society and introduced him to Don Luis, the king’s younger brother.

Thus, Francisco gained a new order: to portray Don Luis and his family. He earned 20 000 reals, and the artist’s wife got the dress embroidered in gold and silver; its cost was about 30 000 reals.

Famous Francisco Goya advanced to the position of the royal painter in 1786, when Charles III of Spain noticed him. After the king’s death, his successor, Charles IV, continued to collaborate with the artist and substantially increased his salary.

In 1795, the man was elected the honorary director of Real Academia. He reached the peak of his career for years later, when Goya became the first royal painter of Charles IV.

Goya’s friend, the painter Francisco Bayeu y Subías, introduced him to his sister, and the young people immediately fell in love. However, the energetic genius did not rush to marry the fair-haired beauty; they did it after the woman got pregnant.

Besides, the brother of the future wife owned the workshop where Goya belonged. The solemn moment happened on July 25, 1773. Soon, the first child was born but died in infancy. Overall, Josefa gave birth to five children (some sources claim there were more kids), but only one boy, Francisco Javier, survived. Later, he became a painter, just like his father.

As long as Goya joined the upper circles, he forgot his wife. Unlike most wives of popular painters, she did not sit for portraits; Francisco did only one painting with her, and his attitude to the woman was pretty obvious. The couple remained married until Josefa’s death in 1812.

The man was far from being a loyal husband: other women were always present in his life. Duchess of Alba was the most desirable among them for Goya. They met in summer 1795 and entered a passionate romance. The duchess’s old husband died the next year, and the widow went to Andalusia. The painter followed her there and spent several months with the object of his love.

Nevertheless, when the couple returned to Madrid, Alba left the artist and preferred a high-ranking military man. Francisco was offended for a while, but the break-up proved to be short: the duchess came back to him soon. The romance lasted for seven years. However, no documental proof was found.

In fall 1792, Francisco had a nasty illness that led to anacusis. It was a relatively favorable consequence, though. The painter felt weak and suffered from headaches; he lost his sight partially and was paralyzed for a while. Today, experts believe that it was the neglected syphilis from the youth times.

Deafness brought many problems to the artist but did not prevent him from courting women.

Year by year, the painter’s condition was deteriorating, and his style was darkening. After the wife’s death and the son’s marriage, the man stayed alone and resigned in 1819 to seclude himself in the country house Quinta del Sordo. He covered its walls with gloomy frescos that illustrated the visions of the lonely, tired person.

However, life was not finished for Goya: he met Leocadia Weiss and had a passionate affair with her; the woman even divorced for Francisco.

In 1824, Goya was afraid of the new government’s prosecution and decided to go to France. He spent two years in Bordeaux but felt homesick one day and returned. He arrived in Madrid at the peak of the post-revolutionary reaction and had to head for Bordeaux again.

The Spanish artist died on the night of 15-16 April 1828, around his family. Francisco’s remnants were delivered to Spain only in 1919.