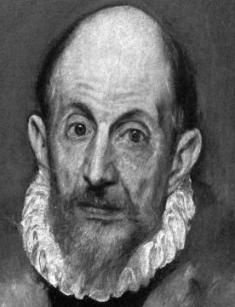 For the Spanish language, the name of Theotokópoulos was too complicated, so after moving to Toledo, the artist began to call himself Dominico Greco, or simply El Greco. The nickname reflected his origins - he was born in Crete, and his second homeland was Spain.

Here, in the late 16th and early 17th centuries, the painter created world-famous canvases, including The Burial of the Count of Orgaz, and Opening of the Fifth Seal, which are considered to be examples of mannerism. Tense composition, the contrast of colors and multiplicity of light sources - all this El Greco used to achieve and express the highest drama. His heritage influenced numerous artists, including Pablo Picasso, Paul Cézanne, and Édouard Manet.

The future creator of Spanish mysticism in art was born in 1541 to a wealthy Greek family. The head of the family earned not only in trade but also in tax collection. The sons, Doménikos and Manoússos, received an excellent education by the standards of that era. There is evidence that they learned ancient Greek and Latin.

When Dominico was 15 years old, his father died. The family was taken care of by his older brother, Manoússos. Subsequently, he devoted his entire life to trade. Dominico chose the path of art. In Candia operated guild of painters. The young man joined the community.

Cretan art of the 16th century is, first of all, a school of icon painting. The uniqueness of the work of the local authors was the ability to combine the rigor of the Byzantine style with Italian motifs. Orders came from both Catholic and Orthodox communities.

Doménikos Theotokópoulos was awarded the title of master no later than 22 years. This made it possible to open his own workshop, and the artist, according to art historians, took advantage of it. The key work of the first period of El Greco's creative biography is Dormition of the Virgin. Along with the Martyrdom of Saint Paraskevi by Michael Damaskenos, the work is regarded as a vivid example of the heritage of the Cretan iconography school.

At the age of 26, the painter left his homeland. In 1967, Doménikos Theotokópoulos settled in Venice, and three years later he moved to Rome. Some researchers believe that in the city on the water, a novice artist created under the leadership of Tiziano. One of the Renaissance titans by that time was over 80 years old, but he willingly accepted students into the studio.

El Greco's Italian period is still marked by the influence of the Renaissance. The outstanding style can be seen in the brightly lit multi-figure compositions, the saturation of colors, the length of silhouettes. However, the characters are more often frozen under his brush in tense poses at the moment of desperate gestures. The drama of mannerism is also found in The Last Supper, The Annunciation, and Purification of the Temple.

The innovativeness of the Cretan artist drew the attention of the Roman elite to him. He is invited to the receptions of Cardinal Alessandro Farnese, where the young painter met with scientists, philosophers, and artists. But soon the guest lost favor. Doménikos was too furious to attack the authorities of the previous period. The Renaissance may leave the stage, but the memory of the representatives of the current is still alive.

"..he was a good man, but he did not know how to paint.," says the Greek artist, speaking, for example, of Michelangelo.

He even dared to suggest to the Pope to redraw the fresco The Last Judgment in the Sistine Chapel following the stricter religious beliefs of the era.

Even a Cardinal quarrels with the artist. Despite the divergence with the Roman public, in 1972 Theotokópoulos opened a workshop in Rome, but it failed to get large orders, and Dominico left Italy.

Spain attracted the painter with the prospect of work. The monarch of this state, Philip II, was interested in decorating the interior of the new palace, there was a competition for masters. Being in Madrid and seeing the aim of gaining authority with the king, El Greco met with the theologian Benito Montana and several people close to the Cardinal of the Cathedral of Toledo. As a result, instead of a royal order, the painter signed his first Spanish contract with representatives of the church.

By the order were created ten paintings, the most famous of which is The Disrobing of Christ (El Espolio). Compressed foreground, emphasizing the pressure of the crowd on Christ, the climax when the prisoner's companion is preparing to rip off his chiton, and, of course, the intensity of red saturation of the work with the dramatic power inherent in mannerism.

An interesting fact is that the church refused to pay 950 ducats for the canvas, which is now considered a masterpiece of world art. Through the court, the author managed to achieve three times less, only 350 ducats. Claims of customers consisted of the fact that El Greco willfully placed in the foreground three Marius, who were not mentioned in the canonical version of the events. Besides, the location of tormentors above a head of the Christ there were indignanturbed clerics. Nevertheless, the order for the Cathedral of Toledo glorified El Greco in Spain.

And yet it did not help in moving to the court of Philip II. The painter executed two orders for the monarch, but the works didn't impress the king, so the cooperation with El Greco was almost interrupted. The 44-year-old author decided to take advantage of the fame he had won in Toledo and opened a workshop here in 1585. Francisco Preboste, a Roman assistant of Theotokópoulos, moved to Spain.

Soon the painter creates a mystical canvas - the painting called The Burial of the Count of Orgaz. It uses the plot of a religious legend about a wealthy resident of Toledo, who financed the church. The "burial" depicts two saints descending from heaven to bury the benefactor by hand. The canvas was created for the church of Santo Tomé in Toledo.

Between 1587 and 1592, the painter painted the painting Saint Peter and Saint Paul based on the contrast of images. Today it is kept in the Hermitage. The author is not alien to the genre of landscape, although there are three such paintings in El Greco's heritage. The most famous one is View of Toledo, which depicts a city illuminated by interior light and stretches under a dark, thunderstormy sky. The painting was one of the first landscapes in European art.

Shortly before his death, the master created the canvas Opening of the Fifth Seal, which was to complement the interior decoration of the church of Saint John the Baptist in Toledo. The painting is partially lost. At the turn of the 19th-20th centuries, restorers cut off the top part. It is believed that this form of work was the source of inspiration for Picasso when he painted Les Demoiselles d'Avignon.

El Greco is also known as a portraitist who was able to convey character in terms of appearance. In Toledo, he was a sculptor, creating altars for the Chapel of San José. The importance of his work is connected with the formation of mannerism, which served as the basis of the Baroque, and the deliberate drama of the paintings allowed to speak of El Greco as a forerunner of cubism and expressionism.

Since the age of 36, he was married to a Spanish woman, Jerónima de Las Cuevas. In 1578, they had a son named Jorge Manuel.

Researchers believe that Dominico was married before. He married either in Crete or Italy. And this did not allow him to register an alliance with Jerónima. At the same time, El Greco mentioned his de facto wife in the official papers, including his will, and recognized his son.

The death of El Greco

In 1614, the artist worked on an order for a Toledo hospital, but the work remained unfinished. The painter fell ill, and the condition worsened day by day.

Realizing he wasn't going to be better, El Greco made a will. The artist passed away on April 7. He was buried at the monastery, which was later destroyed. The remains of the artist are lost.