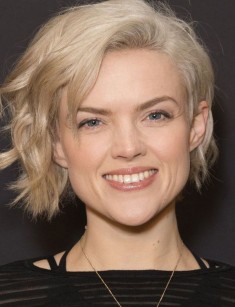 The Welsh actress Erin Richards earned her fame after the British series Being Human. Today, her character Barbara Kean is one of the most notable figures in the series Gotham, the story about Batman.

Erin Richard was born on May 17, 1986, in Penarth, Wales. Not so many things are known about her early life. In her childhood, Erin had dyslexia: she could not read as fast as her peers and sometimes pronounced words in a wrong way. Because of this, teachers treated the girl disdainfully, and classmates laughed at her.

This negative experience encouraged Richards to perform social work: the actress supports Global Citizen. In August 2015, when the woman was a famous show-business figure, she had her column on education problems on the website of this project.

Erin has built her acting career consciously: she studied at the Royal Welsh College of Music and Drama. Before the Welsh joined TV projects, she appeared in low-budget horrors. The 2005 movie Expiry Date became her debut. It is the story about three teenagers who find an unlimited bank card. Together with their girlfriends (Erin Richards played one of them, Lucy), the friends begin to buy furniture, clothes, shoes, jewelry. However, all these purchases turn out to be cursed: they kill their owners, and their death is terrible.

In 2008, the movie Abraham's Point was released; Richards had an episodic role of Milly. The story portrays a young man who tries to overcome the family tragedy that had been haunting him from his childhood. He encounters Robert who helps him recover.

Because of the low budget and insufficient outreach of both project, critics did not pay much attention to the actress’s work. The next years brought little success as well: Erin appeared in the short movies 17 (2009) and Balance (2010) and played Freda in the BBC Torchwood audio story (2009).

The actress’s character, an ordinary young woman Freda, is arrested for retail theft. The police officer, Andy, notices that she has a weird weapon and speaks a strange language, the mixture of English and Icelandic with the Cardiff accent. Torchwood Institute is looking for the information about Freda: who she is and where she came from. However, before investigators gain any results, the young woman escapes.

One of the creators of Torchwood: Asylum invited Erin Richards to play an episodic role of the detective Nancy Reid in the series Being Human. It is the story about a vampire, a werewolf, and a ghost; they want to live a human life. Erin appeared in the 6-8 episodes of the third season.

The 2012 series Breaking In gave Richards the long-awaited lead role: she played Molly Hughes, the assistant of the director of Contra Security and the computer genius Cash Sparks’s lover. This character appeared in all 13 episodes of the second season. Finally, the artist attracted directors’ attention.

The same year, Erin consolidated her progress and appeared in an episode of the series Merlin. She personified Eira, the lover of Sir Gwaine and the ally of Morgana. Eira betrays Camelot and provides Morgana with the significant information about King Arthur; she is hanged for that.

2013 was marked with three projects: the series Crossing Lines (the third episode of the first season), Misfits (the seventh episode of the fifth season), and the postapocalyptic thriller Open Grave. The latter project is about a man who wakes up among dead people; he cannot remember his name, job, or what had happened to him. A mute woman helps him and leads the man to the house where four other people with amnesia live. Little by little, the characters’ memories come back. As it turns out, they are a medical team engaged in the creation of a vaccine against plague. The mute woman has an antidote in her blood which can protect from the horrible disease.

Critics highly appreciated Open Grave and called it a successful zombie apocalypse. At that time, the creators of the series Gotham noticed Erin Richards.

Gotham became the largest project in the actress’s career. The series tells the story of Batman’s origin as well as his enemies’: Joker, Penguin, and Riddler. Erin played Barbara Kean, the ex-fiancée of the police commissar James Gordon. The woman can hardly be called sane: she was kept in Arkham, the mental hospital for criminals, together with Riddler and Joker.

At the beginning of the series, Barbara is a loyal, empathic woman who can sacrifice her life for the sake of her dear one. However, she was betrayed many times and committed murders; her lover, the criminal nicknamed the Ogre, put on her much psychological pressure. As a result, the character becomes a cold-hearted villain.

Gotham was premiered in 2014 on Fox. Both critics and the audience liked it: it received Сritics' Choice Television Awards as Most Exciting New Series.

Few facts about Erin Richards’s life are known. The woman is dating the artist Henry Adolfson. Judging by the recent Instagram photos and international news, the couple is not married and has no children.

Erin is a private person: she has no photo sessions in swimsuits for leading magazines, even though Maxim offered her one. She donates money and supports Global Citizen project; besides, Richards promotes the protection of animals in social networks. Overall, the actress tried to do as much good as possible.

In May 2018, the fifth and the final season of Gotham was announced. The shooting finished on October 30; the first episode was premiered on January 3, 2019. 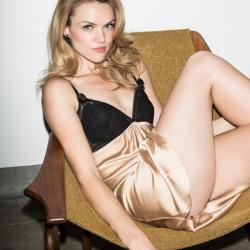