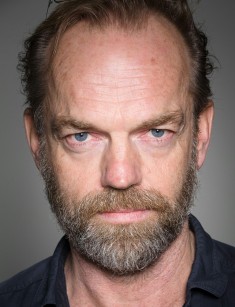 Hugo Wallace Weaving is a Hollywood actor who has an English background. He is famous for his roles in the movies The Lord of the Rings, The Matrix and The Hobbit.

Hugo was born on the 4th of April, 1960 in the Nigerian town of Ibadan in the family of the purebred English seismologist Wallace Weaving and the teacher Anne Lennard, who was half Belgian. Hugo became the second son in their family after the elder brother Simon. In 1961, the family of Weavings came back to the United Kingdom. Later they had a couple of relocations to Australia, South Africa and then back to England. During this time, Hugo’s younger sister Anna-Jane was born. All Weavings’ children have chosen the creative professions in the future: Hugo has become an actor, Anna has become a singer, and Simon has chosen the job of producer.

In English Bristol, Hugo was sent to Queen Elizabeth Hospital boarding school. At the boarding school Weaving for the first time consciously got acquainted with cinematography. Every week in one of the lecture halls of the educational institution, there were held the displays of cinematic masterpieces. Hugo tried not to skip his favorite lessons. Except for cinematography, Weaving Jr. was fond of history.

At the age of thirteen, the boy for the first time first experienced the epilepsy attack. Later he learned to cope with it with the help of the drugs. When Weaving Jr. turned sixteen, his father was sent back to Sydney, where Hugo began to attend the Institute of Dramatic Arts. Australia became the second homeland for the future actor. In 1978, the parents of the young man divorced and his father got married for the second time.

In 1981, Hugo Weaving completed his studies at The Academy Theatre and concluded the contract with Sydney STC Theatre Company. For twenty-two years the actor has taken part in the plays of theatre companies, the dramatic department of Sydney Opera House and the National Drama Theatre.

The tall, athletic actor (Hugo is 188 cm tall, and he weighs 88 kilos) often received main roles of the classical repertoire. Weaving, took part in the following plays - Macbeth, The Cherry Orchard, A Midsummer Night's Dream, The Taming of the Shrew, Much Ado About Nothing, Edmond, Arcadia.

Hugo Weaving had his debut on the screen in 1980 in the film...Maybe This Time, where he has performed the role of the young student. In 1986, the actor received the leading role in the drama For Love Alone. The enthusiastic Science teacher (Hugo Weaving) and a student in love with him (Helen Buday) and a young entrepreneur (Sam Neill) began to have a real love intrigue.

Having taken part in four movies of Australian production, in 1989 Hugo participated in the large-scale project Bangkok Hilton directed by his compatriot Ken Cameron. The young actress Nicole Kidman has had her debut in this movie. Weaving has transformed into the young lawyer, Richard Carlisle, who is engaged in the affairs of the father of the girl who had got into trouble.

In 1991, the movie Proof was released on the screens of the cinemas. In this movie Weaving managed to transform into the character of the man blind from birth who later decided to become a photographer. Another Australian actor Russell Crowe also participated in this picture. For his work in the comedy, Hugo got the award from the Australian Film Institute in the nomination For Best Actor of Low-Budget Movies.

The leading role in the musical movie The Adventures of Priscilla, Queen of the Desert directed by Stephan Elliott has brought overwhelming popularity to Weaving. In 1994 this movie earned $ 11 million in the world hire. The film tells about three transvestites who travel in the desert, give performances and real holidays.

Hugo performs one of the leading roles in the thriller The Interview, which came out on the screens in 1998. The same year, the actor took part in the comedy of English production under the title Bedrooms and Hallways in which again there was used the plot about non-conventional relations. In a year, the cult film The Matrix about reality and the virtual world came out. In this fantastic blockbuster, which earned the world box office of $ 460 million, Hugo Weaving embodied the role of Agent Smith, the representative of the system that subdues all living creatures.

In a year, the director from New Zealand Peter Jackson began the shooting od The Lord of the Rings trilogy by the same-name novel written by J. Tolkien, in which Hugo Weaving received the role of Elrond, the leader of elves. The director has gathered together the unique cast which included Elijah Wood, Ian McKellen, Liv Tyler, Cate Blanchett, and Orlando Bloom. The director has managed to conquer Hollywood and has received 17 major awards from the American Film Institute.

The third film, which was released in the world hire in 2003, brought to its creators more than

$ 1 billion. With such results, it has repeated the record high-grossing movie Titanic. This movie has changed Weaving's creating career, and he has achieved the level of the major Hollywood stars.

In 2003, Hugo continued his work on the thriller The Matrix. He took part in the second and third parts of the franchise: The Matrix Reloaded and The Matrix Revolutions. In 2005, the actor enriched his filmography with the leading role in the screen adaptation of the comics under the title V for Vendetta directed by James McTeigue. That time, Hugo has played the role of the positive character who struggles against the totalitarian system. Natalie Portman also took part in this movie. This very year, Hugo Weaving participated in the crime drama Little Fish in the ensemble with Cate Blanchett, Martin Henderson, and Sam Neill.

In 2012, there came out the mysterious drama Cloud Atlas directed by Tom Tykwer about the sixfold embodiment of the same soul in different persons from various epochs. Except for Hugo Weaving, Tom Hanks, Hugh Grant, Halle Berry have played the roles in this movie. The same year, Peter Jackson began the shootings of the new part of Hobbit trilogy, in which Weaving again appeared in the role of Elrond. In 2015, there was premiered the drama The Dressmaker in which Weaving performed together with Kate Winslet. The same year, Weaving performed the leading role in the thriller Strangerland together Nicole Kidman and Joseph Fiennes.

In 1978, Hugo met the seventeen-year-old Katrina Greenwood, who was living next door to him. The young people have been friends for a long time, but in 1984 they got married.

In 1989, their firstborn Harry was born in their family. In four years Katrina gave birth to their daughter, Holly. The actor's family has settled in the capital of Australia. Hugo Weaving prefers to keep his private life in a secret, and that's why there are no his photos and pictures of his wife and children on the web.

In 2016, Mel Gibson finished the drama Hacksaw Ridge about the deed of the pacifist during the Allied military campaign against the Japanese armed forces. This movie has received two Academic Awards and has at once entered the list of 250 Best Movies in the history of cinematography. Hugo Weaving was lucky to perform the role of Tom Doss, the father of the leading character Desmond, in Gibson’s feature movie.

At present, the actor is working on the new project produced by Peter Jackson. It's a screen adaptation of Philip Reeves book under the title Mortal Engines. Except for Hugo Weaving, Ronan Raftery, Hera Hilmar, Stephen Lang, Patrick Malahide are also took part in this movie. 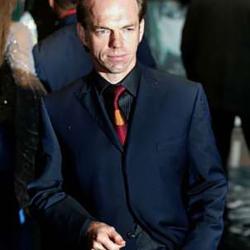