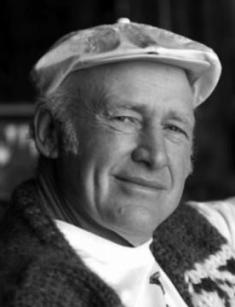 Ken Kesey was born in the county of La Junta, which is located in Colorado state of the United States. His father, Frederick A. Kesey, was a dairy farmer, as well as his mother Geneva (née Smith), who also ran the household. Kesey's family was very religious and God-feared.

When Kesey was eleven years old, his family moved to the suburbs of Springfield, Oregon. There was a farm that previously belonged to his paternal grandfather.

Ken attended parochial school and then went to High School. At school, he became interested in wrestling and even became a state wrestling champion. While studying at the local college, the young man renewed his title and also entered the extensive list of participants of the Olympic team. Then, an unexpected shoulder injury put an end to his sports career.

Then Ken Kesey turned back to his education and enrolled at the University of Oregon School of Journalism and Communication. He got seriously interested in literature. After graduating from the university, thanks to the Woodrow Wilson National Fellowship, Kesey had an opportunity to study at Stanford University's Creative Writing Center. However, the money from the scholarship wasn't enough for the boy, so he got a part-time job at Menlo Park Veterans' Administration hospital where he worked as a janitor. In this period, he participated in several experiments on the effects on the body of various psychotropic drugs, including LSD.

In 1964, having invited a couple of his best friends, Ken founded his hippie-commune which he dubbed Merry Pranksters. Their central aim was to organize musical gigs, where the aspiring band Grateful Dead was starting on its way to glory. The young guys wanted to have fun and offered everyone coming to go through the "acid test," which meant to try LSD or other psychotropic drugs for free.

Merry Pranksters also had their old school bus, "International Harvest." They painted it in bright colors using fluorescent paint and made several trips around America on it, including their memorable trip to New York to the International Exhibition.

Later, Ken Kesey became a person of interest for the US police, which charged him with possession and use of illegal drugs. Kesey tried to hide out in Mexico after faking his suicide. Despite his attempts, hardly had he returned eight months later when he was arrested and sentenced to five months in prison.

The first literary attempt of Ken Kesey was his novel Zoo about a group of hipsters and hippies, which he wrote in 1959, but never published. A year later, he wrote a short story called End of Autumn, devoted to the hardships of growing up. This story also was partly-autobiographical and was never sent to print.

During his work at the Veterans Administration hospital, the aspiring writer had an idea of a novel about patients of a psychiatric clinic. They are actually in perfect health, but the traditional society rejects them for various reasons. In 1962, the novel One Flew Over the Cuckoo's Nest saw the light of day, but at first, it did not bring the author a great success. In a year, a play by Dale Wasserman was staged based on the novel, and it was after this production that Ken Kesey felt a great wave of fame and glory.

The next major book by Kesey was the novel Sometimes a Great Notion, in which the writer uses realism as the foundation for his literary experiment. This work received mixed reviews but later was named one of the most noteworthy American books of the second half of the XXth century.

After that, the author focused on magazine publications and essays. During the next twenty years, the only books that went in print were the collections of short stories Kesey's Garage Sale (1973) and Demon Box (1986). Besides, in 1990, Ken's play The Further Inquiry was staged.

The third novel of Ken Kesey, Sailor Song, appeared only in 1992 and was experiential, as the plot of the book is entirely incoherent and ambiguous. In 1994, Ken Kesey published his last novel, Last Go Round, which he wrote together with his old friend from Merry Pranksters, Ken Babbs. Later, a play was staged based on this novel.

Then there came publications in periodicals once again. The last published book of the author was a collection of short stories Kesey's Jail Journal: Cut the M************ Loose, which saw the light of day in 2003, after the death of the writer.

After graduating from school, Ken Kesey ran away from home and his parents with his classmate Norma "Faye" Haxby. This couple would then go through life together, even though they never made their marriage official because of their different views and life principals.

In this relationship, Ken and Faye had three children, a daughter, Shannon, and two sons, Jed and Zane. Ken also had a daughter Sunshine, from his brief affair with one of the members of Merry Pranksters, Carolyn "Mountain Girl" Adams. What is interesting is that Faye gave her consent to this.

After getting out from prison, where he served a sentence for possession of marijuana, Ken Kesey went to his farm in Pleasant Hill in the Willamette Valley. Here the writer lived until his last days. He was engaged in agriculture, led a solitary and quiet life.

He left the family farm only twice in the 90s, to meet his former groupmates from Merry Pranksters. Ken Kesey appeared in public for the last time in 1977. Already then, the writer was gravely ill. He developed diabetes and was later diagnosed with liver cancer. In 2001, Kesey suffered a stroke. The operation on him was successful, and there was an improvement in his health. Unfortunately, in a fortnight, his health condition worsened once again. On November 2001, at the age of 67, Ken Kesey died in the Sacred Heart hospital.