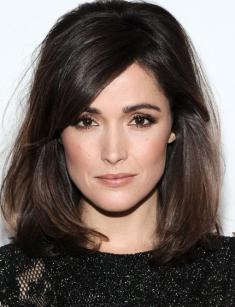 Rose Byrne is an Australian actress who is demanded both in her own homeland and in Hollywood. Rose Byrne takes part also in popular franchizes, like in the series of movies of Star Wars and X-Men, and in independent projects, independent pictures, and even children's movies.

Rose Byrne was born on the 24th of July, 1979 in the town situated six kilometers from Sydney. Her parents came from Ireland and Scotland. The mother of the future actress was working as an administrator at the school, and her father was engaged in the market analytics.

Rose grew up in the family of many children; she has two sisters and a brother. Rose is the youngest child in her family. Since childhood the girl was interested in the creativity: she took part in the performances of youth theater. Already being a teenager, she knew that she would become an actress.

After school, Rose Byrne entered the College of Arts where she profoundly mastered music, dances, and design. Later she studied literary creativity at Sydney University. When Rose turned twenty, she began to study dramatic arts at the Atlantic theater.

Byrne performed her first role in 1994. It was the role in the film Dallas Doll. The thirteen-year-old actress successfully coped with her character that's why she began to receive offers.

In 1995 she played a role in the movie Two Hands. In this movie, she performed the role of the girl who enchanted the leading character with her beauty. Four years later Rose Byrne was invited to take part in the picture The Date and later to the movie My Mother Frank. In 2000, the talented actress brilliantly performed the role in the melodrama The Goddess of 1967 – for this role she received the prize at Venice Film Festival.

Two years later Rose began to receive offers from Hollywood directors to shoot in their movies. She had her debut in world cinematography with the role of the servant in Star Wars: Episode II – Attack of the Clones. Natalie Portman played the role of the hostess. Rare were those of the foreign artists, who were lucky like Rose Byrne – she managed to receive one more role in Hollywood that year – in the picture City of Ghosts.

In her creative biography, the year 2004 was important for the actress. Rose Byrne appeared on the screen in the image of the priestess Briseis in the movie Troy. After the premiere, the whole world learned about the Australian actress, and the movie was nominated for Academic Award. Further, there followed the shootings in the series Casanova, in the drama Wicker Park, in the picture The Tenants. The television critics appreciated Byrne’s acting.

With each following movie, the Australian actress demonstrated new sides of her talent to the directors and spectators. She coped brilliantly both with positive and negative personages; she showed the depth of the character in psychological dramas and thrillers. In her cinematic portfolio, she has more than 50 versatile roles. In 2011, Rose Byrne tried herself as a comedy actress, and she achieved success in this. In the comedy under the title Bridesmaids, she had to make the audience laugh and to talk dirty words as well. And she managed to do this truly.

Among the most remarkable roles of the actress, it’s worth noting the movie Insidious which was premiered within Toronto Film Forum in 2010. And three years later there was released the sequel to the movie also with the participation of Rose Byrne.

In 2011 Rose Byrne appeared in the movie X-Men: First Class. This fantastic fighter turned out to be the full restart of the famous movie Universe based on X-Men comics. The picture tells the story of the appearance of the team of heroes mutants and also about the formation of the secret school where small mutants learn to control and master their own supernatural abilities. Moreover, new movies of the franchise are aimed at showing the youth of the leading characters and villains and explaining to new spectators and fans how the characters have come to their own beliefs.

The franchise announced the recast, and as a result, new actors received the leading roles in the franchise. James McAvoy got the role of Professor Xavier, and Michael Fassbender received the role of Magneto, the antagonist of this Universe. Rose Byrne got the role of Moira Mac Taggert, the geneticist, an expert in the field of mutations and also CIA agent who helped to stop the beginning nuclear war between the USA and Russia.

Moreover, the actress received the roles in the movies The Place Beyond the Pines, The Turning, Neighbors, Spy, Get Him to the Greek, Damages and other projects.

The actress was shooting in the series Damages from 2007 till 2012. The shootings took place in New York, and Rose moved here in order not to be torn between the cities.

Her following remarkable role in the movie X-Men: Apocalypse wasn't less bright than the previous ones. In this picture, the actress again played the role of Moira MacTaggert. The film tells about the awakening of the strongest mutant called Apocalypse – his name is used in the title of the movie, it’s not a hint at post-apocalyptic motives of the film. This mutant is immortal, and he can take the strength of his rivals.

As well as other parts of the franchise, the movie X-Men: Apocalypse, showing breathtaking action scenes, also highlights also serious philosophical questions. The new strong enemy makes united both mutants who stand for the peace with humanity, and those who want to begin the era of domination of the mutants. The ideological enemies try to find the common language to save the planet.

Rose Byrne was a two-time winner of Golden Globe Awards for Best Supporting Roles. In her assets, she also has a couple of prestigious awards for best roles.

At present the personal life of the actress is stable. Rose Byrne is married to the actor Bobby Cannavale, and they bring up two children together.

Before the actress met Bobby, she had had relations with the director Gregor Jordan. They began to have a love affair during the shootings of Two Hands, though their relations came to an end in a short time. After this, the actress had a relationship with the Australian actor and director Brendan Cowell for over six years. Unfortunately, young people had a busy working schedule, and they didn't pass tests distance and broke up in 2010.

The actress got acquainted with Bobby Cannavale in 2012, and they became engaged in the romantic relationship. Bobby announced about this in public during Emmy Awards ceremony. The actor was grateful to Rose and called her the love of his life. On the 1s of February 2016 Rose gave birth to their son. They called him Rocco Robin. On the 16th of December, 2017 in their second son Rafa was born.

At present, Byrne tries to dedicate more time to her family. They live in two countries – in England and in the USA. So far everything is settled well. The fact, that the actress has a family and two children doesn't prevent her from developing her professional skills and being engaged in her favorite activity. The actress spends all her spare time with her family. According to the opinion of her fans, this is one of the reasons for the absence of Instagram account and pages in other social networks.

Nowadays, Rose Byrne is working on the role in the children's adventure comedy under the title of Peter Rabbit which will come out on the screen on the 9th of February of 2018 in the USA. The movie combines the elements of feature movie and animated series, as talking animals will become the leading characters of the picture. Peter Rabbit is based on the series of books of Beatrix Potter who is considered to be the classic of children literature in the English-speaking countries.

The plot of the comedy tells about the struggle of the amusing rabbit Peter and angry farmer McGregor – the sworn enemy of the rabbit family. The rabbit Peter tries to get to the garden to taste some fruits vegetables, and the farmer, in turn, tries to protect his own harvest.

Rose Byrne will appear on the screens in the role of the writer Beatrix or Bea Potter. Only one more leading role will be performed by the actor. Domhnall Gleeson will play the role of the farmer, and Sam Neill will play this character in the old age. James Corden, Margot Robbie, Daisy Ridley, and Elizabeth Debicki will voice-over the rabbits. The shootings with the living actors took place in March of 2017 at Central Station and also in Centennial Park in Sydney. 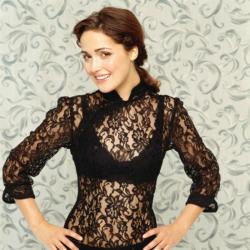