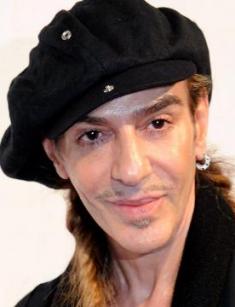 It is difficult to surprise anyone in the world of high fashion, but John Galliano managed to do it time and again. The king of boldness and avant-garde, the master of shocking outfits, the reviver of Christian Dior fashion house - these are just modest words that the designer was described with by both rivals and admirers. In 2011, he got the nicknames "tragedy-man" and "fallen king," when at one point, an Anti-semitic scandal crossed out all the glorious achievements of the couturier.

John Galliano was born in November 1960. His father, Juan Galliano, who came from England, but had Italian ancestors, worked as a plumber. His Spanish mother, Anita, ran the household. According to the designer, she taught him and his other two sisters to dance flamenco on the kitchen floor and to dress up every time they were going out.

Since the family lived in Gibraltar, near Spain, the parents gave their son a proper name - Juan Carlos Antonio Galliano-Guillén. Perhaps such an explosive mixture of blood, personalities, and traditions manifested itself in the future through the love of shock and extravaganza.

At the age of six, John moved to London. After graduating from school, he entered the prestigious College of St. Martin to study art and design, and quickly gained the status of the most creative and successful student.

At the same time with his studies, Galliano worked at the National Theater, where he got interested in historical costumes. The future designer expressed his impressions of that time in his graduation collection, Les Incroyables, which included eight outfits, and they all made a splash.

Brawn's new clothing store bought the collection. It was visited by the famous American singer Diana Ross, who purchased a vest by the young fashion designer, thus marking the beginning of recognition of John's work.

Galliano turned down the offer to move to New York and continued to please the London audience with a new look at fashion. Among other things, it meant creating his label. Soon, John rented studio space on London's Kings Road, and in 1987, Galliano was named the best designer in the UK.

However, all these skirts and jackets could not adequately support him financially, and John decided to move to the capital of fashion - Paris. It was believed that the designer was himself to blame for the fact that he almost went bankrupt at one point. It happened because he preferred enjoying London nightlife to solving organizational issues.

The creative biography of John Galliano, as befits a genius, began with difficulties. In Paris, the designer rented a room and space in a factory owned by a former classmate. Everything changed after the meeting with the editor-in-chief of American Vogue, Anna Wintour.

The reporter saw a genius in a frenzy of colors, textures, and decorations. On her recommendation, a socialite from Portugal, São Schlumberger, provided her mansion for a fashion show, where Galliano presented a luxurious collection "Fallen Angels."

Fashion businesspeople also paid attention to the couturier: in 1995, the owner of LVMH (Moët Hennessy — Louis Vuitton.A.), Bernard Arnault appointed John as the head designer of Givenchy fashion house. Then for two years, the designer was responsible for the production of collections of Balenciaga SA luxury fashion house.

1996 was the blooming time of John Galliano's life– the designer became the head of Christian Dior, replacing the Italian Gianfranco Ferré. The first "African" collection became a sensation in the fashion world. Christian Dior's style had always been associated with femininity and the silhouette of "New Look." And John presented to the public models, disguised as women who ran away from primitive tribes. The couturier was able to create without restrictions on materials and finance.

Under his leadership, the number of stores of the brand Christian Dior increased tenfold. Galliano instilled an understanding that research travel is a necessary attribute of creativity in employees of the fashion house.

John Galliano's collections were unique. They were dedicated to a particular person, for example, Mary Louise Brooks, Rudolf Nureyev, Lucrezia Borgia, Katie Scarlett O'Hara. Or he assigned them bold names that certainly would not be forgotten, such as "Princess Lucretia," devoted to a Russian Princess, who flees her castle; or "Afghanistan Repudiates Western Ideals."

His summer collection of the 2001-2002 season was even called a glorification of Inquisition, werewolves, and vampires for chosen color palette and accessories. In addition to furs, velvet, embroidery, in his collections, Galliano used latex, collars, artificial flowers in the most unimaginable combinations. The interests of the couturier were not limited to dresses, vests and haute couture costumes. In 2008, John released the first children's collection and "John Galliano" perfume.

Having headed such a well-known company, Galliano decided that it would suit him to make a brand out of himself, and dismissed classic suits with a tie. Mel Ottenberg, who is now responsible for the style of the singer Rihanna, came to rescue. Mel had to look for clothes for the head of Dior in vintage boutiques, and then DIY them – repaint, resew, crumple, burn, pour vinegar over them.

According to the designer's ex-assistants, shoes were a separate topic for John. They were always a couple of sizes larger than they were supposed to be. And the boots were also dipped in boiling water and thrown out into the street for cars to drive over them.

And the designer lost all this glorious life in 2011 when under the influence he allowed himself to make an anti-Semitic remark to guests of one of the Parisian cafés. Christian Dior S.A. company, which owned 91% of Galliano's label shares, fired John from both projects. On the official website, the designer's exile is delicately referred to as "departure." The post went to the former assistant of the designer, Bill Gaytten.

John "rose from the ashes" only in 2013, when with the help of Anna Wintour he got employed as the creative director in Oscar de la Renta fashion house. However, a year later Galliano demanded that they should make amendments to the contract, increasing his salary. According to the American press, brand management did not want to continue to pay John's team.

In 2014, the British couturier accepted the offer to become an art director of the cosmetics and perfume store chain, L'etoile. In January of 2015, Galliano presented a new collection created for the Belgian brand Maison Margiela. The outfits created by the designer at the new place of work turned out to be as eclectic and unique as before, as it can be seen on numerous Instagram pictures. By creating a wedding dress for Kate Moss, John made a step towards the come-back of his old glory.

"It saved me, became my creative rehabilitation. Kate gave me hope, and I decided to prove that, despite everything they say about me, I remain myself."

For twelve years, Alexis Roche has been his closest one, as well as occupying the role of his stylist. Before him, the designer's significant other was his colleague John Flett, who died in 1991 from a heart attack.

The designer is still in good physical shape thanks to regular workouts with a personal trainer. Galliano's workout routine includes intensive cardio, stretching, push-ups and jogging along the Seine.

Galliano's muse - Luisa Casati inspired the Fall/Winter 2017-2018 collection. The basis of the collection were coats and suits with a perfect cut and a touch of drama. Back in 1998, even though the Italian beauty had died half a century before, her image inspired John to create a spring-summer haute couture collection in the Dior fashion house and to release a fragrance "Casati."

On the menswear runway at Paris Fashion Week, Galliano presented a beige-blue and orange palette. The designer still has that thirst for a shock: he used satin and pink roses in men's suits.

The events of 2011, of course, affected John Galliano in every sense, hitting his budget as well. However, there is no reliable information on how much the designer lost when he was kicked out of the fashion world. According to Тhefamouspeople.com, as of March 2017, the net worth of Galliano was estimated at $32 million.