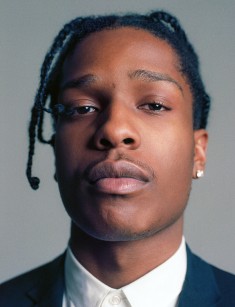 At the dawn of his career, ASAP Rocky (stylized also as A$AP Rocky) said in an interview with the cult I-D magazine that a person builds his own life when life gives you lemons make ginger lemonade. People appreciate the young man with a lot of interests primarily for his music. Two albums of the hip-hopper topped the prestigious Billboard charts immediately after the release.

The rapper’s real name is Rakim Mayers. He was born in October 1988 in the Harlem neighborhood of New York City. Life in one of the roughest areas of the Big Apple left an imprint on the artist's biography. Rakim's father went to jail in connection with selling drugs, and a year later his brother was killed. Moreover, the performer sold cocaine in his early years.

The family changed their place of residence trying to change their life. They moved to Pennsylvania, then to North Carolina. The children even lived in the homeless shelter for a while. In the end, the mother decided to return to New York City. The problems made ASAP stronger, later they “made him appreciate success and pursue the career that he had then.” When the artist recalled childhood, he confessed that "his idols were drug dealers, rappers and basketball players." The turning point was the death of his brother, who instilled in Mayers a love of rap.

At first, ASAP’s style was similar to trillwave or cloud, but over time, the hip-hopper developed his own, easily recognizable, somewhat lyrical music that combined Kid Cudi’s melody and Mason Betha's Harlem World. ASAP Rocky said that he could write something funny, but he preferred gloomy music, as well as clothing.

In 2007, the rapper joined the group ASAP Mob and quickly became its informal leader. He paved the way in the hip-hop world under the guidance of A$AP Yams (Steven Rodriguez), a friend and colleague, co-owner of ASAP Worldwide. Steven died at the age of 26, in 2016. Rakim released together with A$AP Mob the track “Cozy Tapes, Vol. 1” dedicated to his memory.

Markese Rolle, known better as SpaceGhostPurrp in the music world, is one of the first producers of the representative of the new wave of rap.

Until 2011, Myers composed songs; then he went on concert tours. In 2013 he released the album Live. Love. ASAP, and signed a $ 3 million contract with RCA and Polo Grounds, owned by Sony Music.

Shortly before the release, the song “F**kin' Problems” was released separately, and the video for the song was presented at the top-rated TV show 106 & Park. Samantha Lecca and Clark Jackson participated in the shooting.

In 2015, Rocky’s second studio album At. Long. Last. ASAP was released. It had experimental and unique music and included the hit song "L$D." The video for the track was nominated for a Grammy Award for Best Music Video.

The song "Good For You," featuring actress and singer Selena Gomez, stayed in the top 10 on the Billboard Hot 100. The single was the best premiere song in Selena’s careers. Moreover, it received nominations for the Teen Choice Awards and the World Music Awards; was certified three times platinum in the USA and twice in Canada.

In 2016, ASAP Rocky’s name appeared on the cover of the first album of British electronic music singer, Alex Crossan (Mura Masa). This time, their collaborative single was entitled "Love $ick", nominated for the Ivor Novello Awards, and included in the list of the BBC best contemporary songs.

There is little information about ASAP Rocky's relationship with women. Rakim once said that he liked blondes and the women who are not inferior to men, such as Rihanna or Madonna.

For a year, the rapper dated a colleague, Iggy Azalea. Moreover, XXL magazine stated that Iggy and ASAP got acquainted thanks to journalists and fans, while the performers did not comment on it. Nevertheless, their relationships were, apparently, so strong that the young woman tattooed on her body the title of her beloved’s first mixtape Live.Love.A$AP.

Later, when the couple broke up, only the first two words remained on the singer’s hand. The American press wrote about ASAP Rocky’s love affairs with Lana Del Rey and Kendall Jenner.

I-D magazine quoted ASAP as saying that, while composing music, he looked for inspiration using psychedelic drugs and lived according to the principle “Girls, drugs, money." When the rapper imagines the end of his career, he says about a stadium filled with thousands of fans who listen to his songs in a belladonic haze. It was not specified whether Rakim was serious during this interview or not.

The handsome singer is often invited to participate in fashion shoots. So, ASAP became the representative of Dior and a Calvin Klein model. He took part in a photo shoot together with the other members of the group A$AP Mob inside an empty barn. Highsnobiety ranked Rocky No.2 on the list of The Most Influential Person of 2017 for the impeccable sense of style. The rapper outstripped even the famous style hunter, Kanye West.

In 2016, Rakim became interested in design, but he does not seek to create his own collections. So far he only cooperates with Guess Jeans and Under Armor. According to the musician, designer ASAP Rocky is the same as rapper Alexander Wong.

Rocky's Instagram account cannot boast rich content. There are a few dozen photos and amusing freestyle videos. The musician lives in the Soho apartment or Los Angeles. The singer is not nostalgic about Harlem, he only misses the days when he had fun with his peers of different nationalities, and therefore often watches Larry Clark's film Kids.

After a long break, at the beginning of 2018, ASAP announced the album Testing and released the single “5IVE $TAR$” in collaboration with the German rapper, D.R.A.M. Lenny Kravitz, Frank Ocean, the British singer, FKA twigs, and ScHoolboy Q took part in the recording of 17 tracks.

In April of the same year, Rocky presented the track and the video “A$AP Forever," also featuring a multi-instrumentalist and singer, Richard Hall, better known as Moby.

Earlier, the musician had uploaded on SoundCloud the collaborative work with James Baker (BlocBoy JB), the song "Bad Company." The single is planned to be included in the list of soundtracks for the film Uncle Drew, a sports comedy with the participation of Shaquille O’Neal. 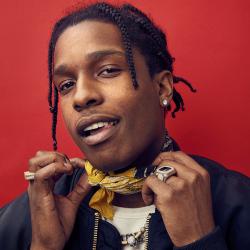