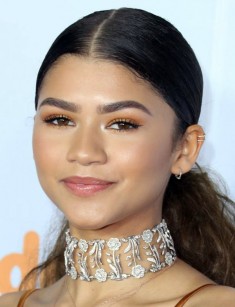 Zendaya Maree Coleman is an American actress, singer, designer. Since childhood, the girl has collaborated with Disney, starred in films, and recorded soundtracks. Zendaya became famous after the release of the movie Spider-Man: Homecoming.

Zendaya was born in Oakland, California, on September 1, 1996. The girl’s parents are Claire Stoermer and Kazembe Ajamu. Zendaya spent most of the time in California Shakespeare Theater in Orinda. The girl’s mother worked as a theater manager there.

Since childhood, the actress has been fond of theater. It is not surprising that Zendaya trained at the theater's student conservatory program. The girl participated in productions from childhood, later helped parents to seat guests, sold lottery tickets.

Zendaya graduated from Oakland School for the Arts. At that time, the actress performed on the stage. The girl got the role of Little Ti Moune in the musical Once on This Island. She had an unusual experience in the school theater. Zendaya portrayed the male character Joe in Caroline, or Change.

Later, the actress studied at California Shakespeare Theater Conservatory and American Conservatory Theater. The girl studied performing arts and improved her skills in the productions: As You Like It, Night Twelfth Night, Richard III.

At first, Zendaya began her professional career working as a fashion model. The girl has modeling body measurements: an unusual appearance and the height of 178 cm. The actress participated in the campaigns for Macy's, Mervyns and Old Navy. She appeared together with Selena Gomez in a Sears commercial. In 2009, the producers of the series Shake It Up noticed the model. Zendaya auditioned successfully and was invited to play in the project. The actress portrayed dancer Rocky Blue.

Zendaya was fond of theatre and cinematography, but at a young age, the girl sang with her father with pleasure. Later, she began to use her singing talent. In particular, in 2011, Zendaya released the song "Swag It Out." Then, she decided to cooperate with Bella Thorne. Their collaboration resulted in the shooting of several short films.

In 2012, Disney offered the novice actress a role in the film Frenemies. Zendaya began to create soundtracks for the movie together with the other participants. In September, the girl signed an important contract with Hollywood Records. A year later, the actress participated in the show Dancing with the Stars. Zendaya's partner was Val Chmerkovskiy. The girl's natural flexibility and dancer's experience helped the couple to take a second place in the competition.

Despite her young age, the actress’ style attracts the attention of young people, so the producers of the reality TV series America's Next Top Model invited Zendaya as a judge. In September 2013, the artist presented a self-titled debut studio album. The girl recorded a few singles that conveyed her view of life and emotions.

Zendaya made a breakthrough in the film industry appearing in the movie Spider-Man: Homecoming. The actress was cast for the role of the classmate of the title character, Peter Parker (Tom Holland). The shooting started in the summer of 2016 in Georgia.

Michelle Jones (Zendaya) appeared as a gifted and intelligent schoolgirl. The girl does not like to communicate with people, considering it unnecessary. The high school student has fallen in love with Peter's classmate, but she is not obsessed with him. Spider-Man: Homecoming premiered officially in June 2017.

The young woman resides in her own house in Los Angeles. Experts estimated the cost of her real estate at 1,4 million dollars. Zendaya’s pet, dog Moonlight, lives there too. Before she took this animal, the singer’s dog, Midnight, had passed away.

The artist does not eat meat and considers herself to be a vegetarian. She does sports to keep fitness. In addition to filming and recording singles, she devotes time to designing youth clothing and writing books.

On the set of Spider-Man: Homecoming, Zendaya met Tom Holland, who is popular with teenagers. The young people immediately became friends, and there was information about the actors’ relationship in the media. They do not confirm it and say that they are just friends, but fans continue to wonder whether Holland is her boyfriend or not.

The so-called “lovers” decided to make fun of journalists. Zendaya posted a message on Twitter writing that she hadn't been on vacation in years. It was a response to publications in the press, which reported that Holland and Zendaya went on vacation together. Tom decided to answer: "Does the press tour count?".

The girl posts photos of advertising campaigns, shooting, recording of singles and friendly parties on Instagram.

Nowadays Zendaya continues to work in various spheres, including the music and film industry. In the coming years, several films with the actress are scheduled to premiere, including one cartoon, where the girl will voice a character. According to unconfirmed information, the producers of the Spider-Man project want to invite Zendaya to shoot in the next part of the film. 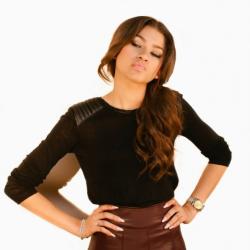