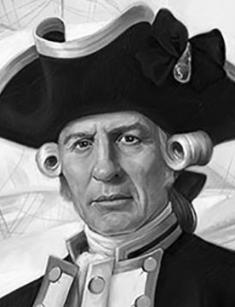 The famous navigator from England, researcher, and discoverer, James Cook, was captain in the Royal Navy and the Royal Society. This outstanding person plotted many locations on the map. Cook devoted a great deal of time to cartography. Therefore, almost all maps compiled by the diligent sailor are accurate. Navigator used his maps for many years (until about the 19th century).

James was born on October 27, 1728, in the village of Marton. It is known from historical sources that his father was a poor Scottish farm laborer. When James was eight years old, the family of the future sailor moved to Great Ayton, where he attended a local school. Nowadays, the school is a museum in honor of James Cook.

After five years of study, the boy began to work on the farm, where his father was promoted to farm manager. When James was 18 years old, he became a ship-boy aboard Hercules. It was the beginning of the marine career of young and ambitious Cook.

James worked on ships owned by John and Henry Walker. In his free time, the young man learned geography, navigation, mathematics, and astronomy, reading books. For two years Cook worked in the Baltic Sea and the east of England. At the request of the Walker brothers, he decided to return to the position of master's mate aboard Friendship. After three years, James was offered to take command of the ship, but he refused.

Cook volunteered for service in the Royal Navy instead and, after eight days, got his first posting aboard HMS Eagle. This fact of the biography raises questions because it is not clear why the young man preferred the hard work of a sailor to captainship. But after a month, Cook became a boatswain.

Soon, in 1756, the Seven Years War began, Eagle was involved in the blockade of the coast of France. Eagle won the battle against the ship Duke of Aquitaine but was forced to go to England for repair. In 1757, James formally passed his master's examinations, and on his 29th birthday, he joined the frigate HMS Solebay.

After the siege of Quebec City, James was assigned captain aboard the ship Northumberland, which was considered a professional promotion. The Admiralty ordered Cook to continue to map the Saint Lawrence River until 1762. The maps were published in 1765.

James organized three voyages, which made an invaluable contribution to the vision of the world.

The first expedition lasted three years; its official purpose was to study the transit of Venus across the Sun. But additional instructions ordered Cook to search for the southern continent after completing his observations.

Since at that time world states fought for new colonies, historians suggest that astronomical observations were a pretext that hid the search for new settlements. The expedition had another goal of discovering the east coast of Australia.

The goal was achieved during the expedition, but the information received was not useful due to inaccurate data. The second task, the discovery of the mainland, was not completed. Russian sailors discovered the continent in 1820. They proved that New Zealand consisted of two islands that were separated by a strait (Cook Strait). James succeeded in mapping the eastern coast of Austria, which had not been explored yet.

The goal of the second voyage is unknown. The task of the expedition was to study the southern seas. It is evident that James moved to the south, wanting to find the southern mainland. Cook’s voyage was most likely ordered by the authorities.

The purpose of the third expedition was to discover the Northwest Passage, which was not achieved. But Hawaii and Christmas Island were found.

James Cook returned to England in 1762. After that, on December 21 of the same year, the sailor married Elizabeth Batts. They had six children, James and Elizabeth lived in east London. The first child, who was named James, lived for 31 years. The life of the other children was relatively short. Two children died at the age of 17, one child at age 4, and two more lived for less than a year.

Mrs. Cook was knocked down by numerous deaths. Elizabeth lived for another 56 years after her husband's death and died at the age of 93. The wife admired James, measured everything by his standard of honor and morality. When Elizabeth wanted to express disapprobation, she said that "Mr. Cook would never have done that." Before her death, Mrs. Cook tried to destroy private papers and correspondence with her beloved husband, believing that the contents were too sacred for prying eyes. She was buried in a family vault in Cambridge.

During his third and last expedition, James reached the Hawaiian Islands on January 16, 1779. The inhabitants of the island closed around the ships. The navigator saw several thousand indigenous people, and the Hawaiians considered Cook to be their God. At first, a good relationship was established between the crew and the inhabitants, but the number of thefts committed by Hawaiians increased. The conflict was getting more intense.

Seeing the imminent danger, on February 4, the crew left the bay, but the ships were seriously damaged due to the storm. On February 10, the ships were forced to return, but the attitude of the Hawaiians was already hostile. On February 13, the cutter was stolen from the deck. The attempt to return it was unsuccessful and ended in a collision.

The next morning the boat was stolen, Cook wanted to return the property, trying to take the leader hostage. When James and his crew marched through the shore to retrieve the king, the latter refused to go. At this moment, Hawaiians spread a rumor about the killing of the locals by the British, provoking hostile actions. Captain James Cook and the four sailors were killed by the Hawaiians during these events on February 14, 1779.

People paid tribute to the great navigator, James Cook. A lot of places were named in his honor:

A Spacecraft Shuttle was named after Cook's first ship Endeavour. It landed people on the moon during the fourth spaceflight.

The monument to James Cook was erected on August 10, 1932, on Victoria Square in Christchurch. The idea to perpetuate the great navigator belongs to the local bookmaker and philanthropist, Matthew Barnett. He organized competition, and then paid the talented sculptor, William Trethewey, for his work and presented the monument to the city.

Vladimir Vysotsky dedicated a short, humorous verse to the captain.

Now Cook's legacy is his diaries, which now are of particular interest to researchers. The biography of James has a lot of exciting events, and the captain is rightfully considered an outstanding discoverer.