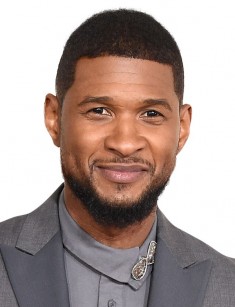 The American R&B singer Usher is one of the most commercially successful musicians today. From the moment his first album Usher came out in 1994, more than 75 million copies of his works have been sold. Nowadays, the singer does not limit himself to music only: he appears in movies, dances, and cooperates with young artists.

Usher Terrence Raymond IV was born on October 14, 1978, in Dallas, Texas, into the family of Jonetta Patton (née O'Neal) and Usher Raymond III.

The father left the family when the boy turned one. Jonetta took the baby and came back to her native town Chattanooga, Tennessee. Soon, she married for the second time; in 1984, Usher got a half-brother, J. Lack.

Jonetta was a religious woman; she directed the performances of the youth church choir. At nine, Usher joined the choir; the boy’s grandmother noticed the child’s talent and insisted the family should move to a large city where her grandson would have more opportunities to develop his artistic abilities. Thus, the family settled in Atlanta, Georgia.

Ten-year-old Usher went to North Springs High School and sang at the R&B quintet NuBeginning; he gained some experience of performing and working at a studio. In 1991, the boy and his group recorded ten songs that were presented in Nubeginning Featuring Usher Raymond IV. The album was spread only in Atlanta and by mail; Jonetta called this advertising “bad experience” and took the boy from the group.

At 13, Usher met Bobby Brown’s bodyguard, A.J. Alexander, who appreciated the teenager’s talent and began to take him to musical competitions and young singers’ festivals. One day, L.A. Reid who presented LaFace Records was invited to such a show; he liked the way Usher performed “End of the Road” by Boyz II Men and offered the boy a contract. The young talent’s mother became his manager until 2007.

When the debuting album was recorded, Usher had a voice break; LaFace Records considered canceling the agreement. The famous rapper Sean Combs also known as Puff Daddy helped the young man recover and worked as his executive producer. Thus, the first album Usher came out on August 30, 1994. The audience was surprised to hear the 14-year-old boy sing about sex, yet the tracks turned out to be cheer, and the album reached number 25 in Billboard Top R&B/Hip-Hop. Today, more than 500 000 copies have been sold.

The second album, My Way, was released on September 16, 1997. It was more successful: the nomination for Grammy Awards and six-time platinum status achievement. Besides, the single “You Make Me Wanna...” created with the rapper Jermaine Dupri became the leading song in Great Britain, got the gold and platinum status in the USA, and won the Soul Train Music Awards. The second single, “Nice & Slow,” topped Billboard Hot 100.

In 2001, the recordings from the third album All About U leaked on the Internet. For this reason, the musician postponed the release and claimed none of those songs would appear in the final version of the album.

The renewed album entitled 8701 came out on August 7, 2011. 17 songs including “U Remind Me” that brought the artist his first Grammy were put in the album. The next year, “U Don't Have to Call” gave the musician the new Grammy Award as Best Male R&B Vocal Performance.

The famous track “Yeah!” that made Usher famous far beyond his country was included in the 2004 album Confessions. The song topped Billboard Hot 100 for six weeks and made the whole album incredibly popular: 1.1 million copies were sold in the first week (today, this number is more than 20 million). Two other tracks, “Burn” and “Confessions Part II,” remained songs number one in Billboard Hot 100 for eight weeks each.

In the United States, Confessions became platinum and received many prestigious awards including three Grammy Awards. In 2004, the musician won the Artist of the Year at Billboard Music Awards.

In May 2008, the next album Here I Stand was released; it topped American Billboard 200 immediately. 433 thousand copies were sold in the first week; today, more than 1.5 million copies in America and 5 million copies in the world have been purchased.

The song “Love in This Club” is one of Usher’s most popular songs; its music video was nominated for the MTV Video Music Award for Best Male Video, but Chris Brown’s “With You” surpassed the musician’s hit.

The sixth studio album Raymond v. Raymond came out in 2010; a large tour followed it. The musician gave 92 concerts and earned more than $75 million. Billboard put OMG Tour on the 17th position in Top 25 Tours.

The next years were marked with the albums Looking 4 Myself (2012) and Hard II Love (2016). The songs “Good Kisser,” “Missin U,” and “No Limit” became great hits. Still, none of the albums became as successful as Confessions.

Usher has tried himself in acting. The role of the main character’s lover in the series Moesha became his movie debut. Brandy Norwood became his stage partner. Later on, the musician appeared on the big screen and played a student, Gabe Santora, in the mystic detective The Faculty (1998). The episodic role of a DJ in She’s All That followed.

Usher’s role in the 1999 crime drama Light It Up was more significant. The movie tells the story of six teenagers who have taken hostage injured police officers. The movie budget was $13 million, yet the box office was only $5.9 million; critics called the plot “predictable.”

Further on, Usher had episodic roles in Geppetto, Texas Rangers, the series The Twilight Zone, American Dreams, and Sabrina the Teenage Witch.

In 2005, the musician starred in the comedy In the Mix; he played DJ Darrell. The movie received negative reviews:

“Fans may get a kick out of seeing Usher showcasing his charm on screen, but the movie itself is tone deaf and inconsequential, even by rom-com standards.”

In 2006, the musician appeared on Broadway and personified the lawyer Billy Flynn in Chicago. Two months later, Usher was diagnosed with strep throat; he had to leave the show. Usher’s upset friends kept returning the tickets. Broadway lost $400 000 because of the star’s disease.

Six years later, the artist joined the cast of the play Fuerzabruta; critics appreciated his vocal and chorographical performance.

The role of Sugar Ray Leonard, the opponent of the legendary boxer Roberto Durán in the 2006 movie Hands of Stone, became Usher’s most significant and mature work. Although the movie expenses were four times as large as the box office ($20 million and $5 million correspondingly) and critics’ opinions were unfavorable, Usher believes this experience was useful for his acting career.

Chilli, or Rozonda Thomas, the member of the group TLC, became the musician’s first love. They had been seeing each other for two years, in 2001-2002. At that period, the musician was creating the album Confessions; the majority of the songs were inspired by the personal experience of Usher’s friends and colleagues. For instance, some songs were about cheating and unintended pregnancy. This step was going to ignite fans’ interest, but Chilli became suspicious: she stopped trusting Usher. In December 2003, the couple broke up.

In 2004, the media believed the musician was dating the supermodel Naomi Campbell: they attended the MTV Europe Music Awards ceremony together. The next year, the musician appeared at the Grammy ceremony accompanied by Eishia Brightwell.

In November 2005, the artist began to date his stylist Tameka Foster; in February 2007, the couple announced they were engaged. The world of show business was getting ready for the luxurious wedding that was supposed to take place in July in Hampton. However, the lovers decided to have a modest ceremony instead. On August 3, 2007, Tameka and Usher married in Atlanta. On September 1, the ceremonial reception took place.

In June 2009, the musician filed for divorce with Foster. On August 24, 2012, the court decided that Usher Raymond V and Naviyd Ely should be brought up by the father. The next year, Tameka tried to challenge this decision because the elder son, Usher V, was taken to an ICU after he got stuck in a swimming pool drainer. The woman claimed the musician did not pay enough attention to the children. However, during the hearing, Usher kept the right to bring up his sons.

In September 2015, the news about the wedding of the singer and his manager Grace Miguel appeared in the media. The first rumors were caused by the photo of the gold ring on the woman’s Instagram page. Later, Usher confirmed the information in the interview to Ellen DeGeneres. The couple split up in January 2018.

In July 2017, the musician was involved in the sex scandal: four women and one man accused Usher of having infected them with a venereal disease. In January 2018, the court decided the American singer was not guilty.

Zaytoven who contributed to Raymond v. Raymond became the producer of the new album. Overall, there are eight songs in this work including the duos with the American rappers Future and Gunna. 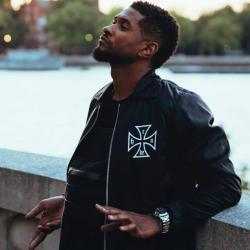