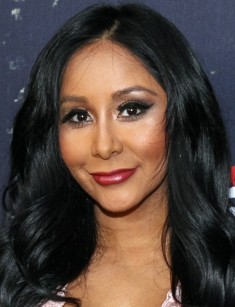 Snooki is a famous American actress who has earned her fame thanks to the US reality shows, not movies. She is particularly popular among the young audience. Snooki is often invited to TV programs and social events.

Nicole Elizabeth Polizzi was born in fall 1987 in Santiago, Chile. Her biological parents left her, and the American-Italian couple adopted the girl when she was six months old. Her foster father worked as a car service company supervisor and a volunteer firefighter; the mother was an office manager. The family lived in a beautiful city, Florham Park, New Jersey.

When it was time for Nicole to go to school, the Polizzis moved to Marlboro. She got her nickname “Snookie” at a middle school after the character of the movie Save the Last Dance popular among young people. Just like the movie character, Nicole was the first among her friends who kissed a boy. Nicole bonded to her nickname; after the graduation, people kept calling the young woman Snookie.

From the early years, Polizzi was an active child; at school, the parents took her to a cheerleading club where Nicole was pretty good. Still, there were challenges in the would-be actress’s life as well. She had a predisposition to overweight and tried to keep fit by avoiding food. As a result, she got the eating disorder: she did not eat much, and her weight was only 36 kg.

The parents noticed the danger in time and took her to doctors. Soon, Nicole managed to recover. After Snooki finished school, she entered a college and was trained to become a veterinary technician. When she received the education, she did not look for a job in that sphere: she wanted to develop her career in a different way.

In 2002, Snooki gained her first role in the comedy show Fashion Police. The next four years were marked by other small show offers.

The 2009 reality show Jersey Shore brought the young woman the real fame. By that time, this project was one of the most popular programs on the American television. In this show, eight participants (four men and four women) stayed in a luxurious house on the Atlantic coast. In the evening, they would throw parties and go to bars or discos; at noon, they would swim and sunbathe.

From time to time, various events took place in that cozy nest: people fell in love and flirted, and others were confronting each other, conflict, having quarrels, and making up. Video cameras recorded everything so that MTV viewers could watch what had happened there.

As the project was going on, Nicole’s earnings per episode increased from $5000 to $150 000. The show popularity inspired channels in other countries to create similar programs after the positive results in the United States.

When Jersey Shore closed, MTV offered the actors to take part in new projects. Snooki & JWOWW turned out the most successful show; Snooki was showered in glory. The new series illustrated the lives of the former show participants: the women continued to be friends after the shooting was finished.

In 2013, the star took part in the 17th season of Dancing with the Stars; Sasha Farber became her show partner. The couple left the competition in the seventh week. Thanks to this project, Snooki became even more famous: she demonstrated her capriciousness and cranky temper that fans could see in Jersey Shore.

Nicole was popular not only because of the dancing show; her name appeared in newspapers often. In 2010, she was arrested and accused of hooliganism and disturbing the peace in New Jersey. Snooki was given community service and a fine: $500. The next year, the woman was arrested in Florencia, Italy: she ran into a parked traffic police car. The officers had light injuries; Snooki was released.

As for the movies, the number of the reality shows starring Snooki is bigger than her filmography. In 2011, she had a role in the series Nail Files; in 2012, she played an insignificant character in The Three Stooges. 2013 brought the comedy Movie 43. In 2014, she appeared in an episode of the popular series Supernatural.

There is little information about Nicole’s personal life before she got famous. Snooki started dating her future husband after the first season of Jersey Shore. Her lover, Jionni LaValle, was an ordinary man and taught sports management in a college before he met Nicole.

In March 2012, the couple got engaged. Five months later, their first child, the son Lorenzo Dominic, was born. Snooki was raising the boy and participating in TV projects. She did not plan to have more children, yet life turned out to be different: in September 2014, Nicole gave birth to the daughter Giovanna Marie. Two months later, Snooki and Jionni married officially. The wedding ceremony took place in a Catholic church in East Hanover.

After Nicole gave birth to the first child, she took back her excellent shapes quickly; six months later, in 2013, she shot for the March issue of the American magazine Us Weekly. With this experience, the woman got fit after the second childbirth quickly. The actress’s height is 142, and she looks tiny.

In April 2018, the premiere of Jersey Shore: Family Vacation took place: the old show participants except for one gathered together in Miami, Florida, to create the project special episodes. The seven friends spent a month on the seashore and shot a full season of the reality show. MTV broadcast the last episode on August 23, 2018.

The actress frequently communicates with her fans via social networks. She regularly posts new pictures with her family or photos from social events. As Snooki became a mother and a wife, she does not publish too explicit photos. However, the paparazzi continue to watch the celebrity’s life, and there are photos of Snooki wearing a swimsuit on a beach or going shopping with an extravagant look on the Internet. 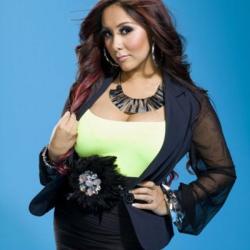