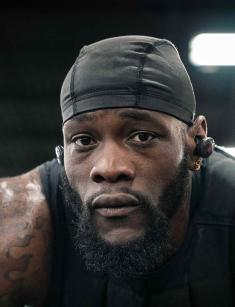 Deontay Wilder is the world heavyweight champion who knocks out his rivals easily. Deontay might not have connected his life with boxing and become the world-famous star, but for the disease of his daughter.

Deontay Wilder was born on October 22, 1985, in Tuscaloosa, Alabama. Like the athlete’s friends in his hometown, the young man dreamed of becoming a basketball or soccer player. Fortunately, Deontay has had a great athletic body which gave a chance of professional success.

The first step toward launching a sports career for the young people in Alabama was participation in matches for a college team. Wilder planned to follow the same path. However, his dreams did not come true.

In 2004, he and his girlfriend Jessica learned about pregnancy. However, the doctor said that the child would be born with the disease and never be able to walk. He offered the young couple to terminate the pregnancy, which was immediately rejected by the prospective parents.

The girl was born with spina bifida. She was named Naieya, and the 19-year-old father made a firm decision that he would do everything possible to help his daughter recover. The young family could not pay for the necessary operations and afford the estimated costs.

Then Wilder began to go in for sport, which brought a better income than basketball. In 2005, the athlete, who participated only in street fighting, first went to the gym to build up core strength in the ring.

Deontay recalls that no one worried about his problems in the gym. At first, they did not take the novice boxer seriously and demanded to give all his strength during sparring and training. But the young father did not forget about the original goal and left it all out in the ring, which soon helped him to win.

At first, Deontay began an amateur boxing career. Two years after the start of training, the physically gifted athlete won the National Golden Gloves Championship. In 2007, he also defeated his opponent in the finals of the US championship.

In 2008, the athlete participated in the Olympic Games in Beijing. He showed the brilliant performance there but lost to Italian Clemente Russo in the semifinal. Deontay won a bronze medal and made a firm decision to become a professional boxer.

On November 15, 2008, the boxer made his professional debut in the match against Ethan Cox. Wilder knocked out his opponent quickly. Ethan lost in the second round while Deontay was delivering powerful blows.

Then he won several matches. All bouts led to knockouts, and the opponents fell into the ring in the very first rounds. The losers were Owen Beck, Damon McCreary, and Kelvin Price, who had been considered invincible before they met Wilder.

Wilder’s successful performance gradually led to the expected match for the WBC heavyweight title. The fight against the defending WBC champion, Canadian Bermane Stiverne, was held in Las Vegas on January 17, 2015.

It was the longest bout in Wilder's boxing career. The opponents fought in the ring all 12 rounds. From the very first minutes, Wilder took control of the fight and dominated the entire battle. It is not surprising that Deontay won the WBC heavyweight title by unanimous decision. The athlete dedicated this victory to his daughter Naieya and idol Muhammad Ali, who had turned 73 years old that same day. After the fight, Bermane Stiverne went to the hospital due to dehydration.

From 2015 to 2016, Wilder defended his title successfully. The fight of the champion and Alexander Povetkin was scheduled in May 2016. It was reported that the Russian athlete had tested positive for the banned substance, and the match was canceled. Instead, Wilder fought against Mexican-American Chris Arreola. The result of the battle was the flawless victory of the champion. However, he got a hand injury that ruled the athlete out for the remainder of 2016.

Deontay Wilder and Bermane Stiverne’s rematch was held in November 2017. The commentators saw the inactivity of the mandatory challenger in the ring. As a result, Stiverne was knocked out three times in the first round, which led to the knockout victory.

On March 3, 2018, Wilder fought against Luis Ortiz, a promising Cuban heavyweight. The rivals planned to compete in November 2017, but the match was canceled due to the doping scandal. Ortiz tested positive for the banned substances.

Both boxers started the fight cautiously, but the match turned into a heated confrontation after round 4. The Cuban athlete seemed to do more in the seventh and eighth rounds, but after that, Wilder took control of the fight, and the challenger was noticeably tired. At the end of the match, Wilder knocked his rival down, which turned into a technical knockout that decided the battle.

In 2009, the boxer married Jessica Scales-Wilder, who gave birth to four children. However, in 2015, Deontay announced the separation from his wife and the relationship with a beautiful young lady, a member of the American TV show WAGS Atlanta and the Instagram star, Telli Swift.

The boxer has been involved in several legal scandals. So, in 2013, he was charged with a domestic assault at a hotel in Las Vegas. However, the lawyers of the boxing star managed to explain that the incident occurred because the athlete mistakenly suspected the victim of the theft. The problem was solved, and the charges were dropped.

In June 2017, Wilder was stopped by the police, and the athlete was suspected of drug possession. His lawyers said that the marijuana found in the car belonged to Deontay’s friend, who used the vehicle in the absence of the boxer. The athlete was unaware of these substances. However, on January 11, 2018, the court found the champion guilty.

Despite the scandals, the boxer remains the reigning WBC heavyweight world champion.

The American athlete broke Vitali Klitschko's record for the consecutive knockouts, and he is also the reigning titleholder, wearing the crown since 2015.

Deontay Wilder has an estimated net worth of $16 million.