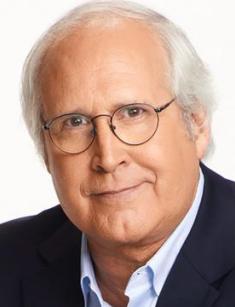 Cornelius Crane Chase, known by his fans as Chevy Chase, is an American actor, comedian, and writer. It was with the writing of short funny stories that Cornelius started his career, and later, in 1974, he appeared on the big screen as an actor. At the same time, the typical character of the actor was born - a loser in comedy films with vulgar and flat jokes. Chase's acting was recognized by the film critics, who presented him the prestigious Emmy Award twice.

Cornelius Crane "Chevy" Chase was born on October 8, 1943, in Lower Manhattan, New York, U.S., and grew up in Woodstock. The father of the future actor, Edward Tinsley "Ned" Chase worked as a literary editor. Chase's mother was an ardent Catholic named Cathalene Parker (née Browning), worked as a concert pianist and librettist.

His maternal grandfather, Admiral Miles Browning, held the post of Rear Admiral Raymond A. Spruance's Chief of Staff on the aircraft carrier USS Enterprise (CV-6) at the Battle of Midway in World War II. Chase's paternal grandfather was an artist and illustrator named Edward Leigh Chase. Cathalene, Chevy's maternal grandmother, sang at the Opera and performed at Carnegie Hall.

Cornelius got his nickname "Chevy" at the suggestion of his grandmother, a descendant of the Scottish Clan Douglas, who wanted to name her grandson after the English medieval ballad called The Ballad of Chevy Chase. Cornelius was the representative of the fourth generation of New Yorkers in the family.

The ancestors of his mother came to Manhattan in 1624. The actor listed such personalities as New York City mayors Stephanus Van Cortlandt and John Johnstone; the Dutch Schuyler family, John Morin Scott, General of the New York Militia during the American Revolution; Anne Hutchinson, dissident Puritan preacher and healer; and Mayflower passengers and signers of the Mayflower Compact from England, John Howland, and the Pilgrim colonist leader and spiritual elder of the Plymouth Colony, William Brewster as his ancestors.

Chevy's parents filed for divorce when the boy was only four years old. Soon each of them built a new family. According to Chase's autobiography, in his childhood, his mother together with his stepfather John Cederquist used physical and psychological abuse in the upbringing of the boy. In 2005, both of the parents of the future actors died.

Chase received general secondary education at Riverdale Country School, but soon he was expelled. In the end, he graduated from an independent boarding school in Stockbridge, Massachusetts. Then the young man studied at Haverford College from 1962 till 1963, from which he was expelled for lousy behavior and absurd sense of humor.

In an interview in 2009, the actor said that the real reason for the expulsion was a cow that he kept in his dorm room. However, his roommate David Felson in 2003 stated that Chase was expelled for academic debt. Then the young man transferred to Bard College in Annandale-on-Hudson, New York.

Then the young man faced a difficult choice: either to go to University or to serve in the army. Chevy never went to University, but he wasn't attracted to the idea of serving in the military either. In January 1989, Chevy Chase became a guest on the TV show Pat Sajak, where he told viewers that he had no plans to join the army and that he would rather come out as gay.

In College, Chevy tried his hand at music – playing drums and the keyboard. However, the music career path was not meant for him. Before the film industry, Chevy Chase worked as a taxi driver, a truck driver, a construction worker, a waiter, a fruit picker, a supermarket manager, an audio engineer, a salesman at a store.

At the dawn of his film career, Chase in 1967 organized an underground comedy ensemble called Channel One. Three years later, Chevy wrote a parody of mission impossible for Mad magazine.

In 1973, Chase thought about a career as an actor for the first time, becoming a member of the satirical radio show The National Lampoon Radio Hour. In October 1975, NBC launched the night comedy series "Saturday Night Live" featuring Chevy Chase. At the same time, Chase wrote scripts for the shows on NBC Channel.

In 1978, the actor became famous after a part in the movie Foul Play directed by Colin Higgins. However, the actor received wide popularity after a role in the film Fletch. In 1980, Chevy starred in the comedy movie Modern Problems and was severely injured because of an electric shock. As a result, the actor started struggling with depression, another reason for which was the divorce from his wife.

According to the information posted on the Internet, at the peak of his acting career, Chevy Chase's fee was about $7 million per movie. In total, the actor now has more than 80 films in his filmography.

In 1973, Chevy Chase married Suzanne Hewitt, but the marriage lasted only three years. Chevy's second marriage to Jacqueline Carlin was arranged on December 4, 1976. A year and five months later, they divorced. The media list Chase's drug abuse, in particular cocaine, and such side effects as megalomania and paranoia as a private ground for divorce.

In 1986, Chase went to the Betty Ford Clinic for treatment of addiction to painkillers. And in September 2016, the actor was in therapy for alcohol addiction.

Besides, Chevy Chase is an active ecologist, initiator of charitable and political actions. The actor raised money and campaigned for Bill Clinton in the 1990s and John Kerry in the 2004 presidential election.

Chevy Chase has a net worth of $50 million. Now the actor is busy filming Greg Pritikin's film The Last Laugh, which premiered in 2018. At the same time, Chevy starred in the movie Federal Offense and The Ogilby Fortune.

At the end of February 2018, there was a scandal involving Chevy Chase and a company of young people. According to victims, the actor, driving a car, pursued young people and then tried to attack them. The reasons for the aggressive behavior of the actor has not yet been established. The trial on this issue was scheduled for March 2018.