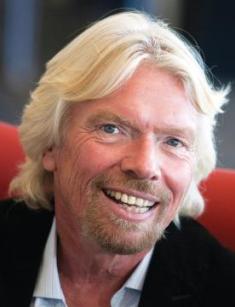 Richard Branson is one of the most influential figures in the world of business; even those far from it must have heard something about the entrepreneur or Virgin Group. Charming, educated, and successful, the businessman behaves extravagantly, writes books, and prefers active leisure.

The future entrepreneur was born on July 18, 1950, in London. The boy’s father, Edward James Branson, worked as a lawyer, and the mother, Eve Branson, used to be a stewardess and dancer. The family was quite wealthy. Richard grew up with three siblings: the sisters Vanessa and Lindy and the brother Tom.

The mother was a powerful role model for little Richard: the restless and adventurous woman taught her son not to give up and pursue his goals no matter how far it seemed from coming true.

Branson went to Scaitcliffe School until 13. His relationships with peers were tense, and studies were difficult as well: the boy was not interested in the sciences. One day, after another conflict with classmates and teachers, the student transferred to Stowe School. However, it did not change anything about his attitude to school subjects. According to the businessman, his unsatisfactory grades pertained to dyslexia.

Many sources claim that the future millionaire quit his studies at 15. However, Branson did not confirm it in his autobiography Losing My Virginity.

Richard is an excellent example of an inborn entrepreneur. As a teenager, he began to grow conifers and breed budgies for sale.

The magazine brought the businessman his first profit. Branson spent a part of that money on charity funds, one of which specialized on free psychological consultations.

There was a story behind it: Richard’s girlfriend needed to have an abortion, and searching for a competent doctor took a long time. Thus, the idea about charity came in. Besides, the entrepreneur donated money to organizations working on ecological and social issues.

The first significant business plan appeared when the man was crossing the English Channel. Branson purchased a series of music discs labeled defective; he was interested in cheap in-bond goods, not music. He was selling the discs in the street and delivered them to customers by car; later, Branson had the post system organized.

The business was getting more and more successful. The unofficial resale was an advantageous option for many people, and the competition with large stores grew. Richard used the name “Virgin” as he was conducting bargains; when it was time to choose a name for the official company, Branson did not have to think much about it. “Virgin” symbolized beginning business persons’ lack of experience.

In 1971, Branson’s first store Virgin Record opened in London. In a while, Branson and his childhood friend Nik Powell organized a recording studio to have musicians rent it. This is where the multi-instrumental musician Mike Oldfield created his collection of hits Tubular Bells. Further on, the group Sex Pistols began to collaborate with the studio – none of the companies had agreed to do that before.

Branson gave the young men the opportunity, and the decision proved to be right. Later, the businessman called it the most beneficial collaboration in the history of Virgin Records. Besides, Richard signed contracts with Genesis and Rolling Stones.

In 1982, Richard Branson and Randolph Fields took another project as a part of the Virgin label: the air company Virgin Atlantic that flew between Great Britain and the United States. The first flight took place in 1984; the newcomer was quite popular in the market.

In the 1980s-1990s, journalists claimed that Branson was on good terms with Margaret Thatcher and even used her support. Some people expected the young and successful businessman to become the Mayor of London.

In 1992, Virgin Atlantic was on the edge of bankruptcy; its owners sold Virgin Record to improve the situation. The next year, Branson founded Virgin Radio and, in a while, decided to return to the music industry with the second music label. He sold it in 2007.

Besides, the businessman gained a railway company in 1997 and gave it his label name. The second air company appeared in Australia in 2004. Branson did not limit himself with that and created the company Virgin Galactic that allowed anyone with lots of money to take a space flight.

Since 2007, Richard has owned a mobile communications company. He opened banks, travel firms, hotels and launched a publishing house; he purchased a European gay club. Today, Virgin Group unites more than 400 companies; the entrepreneur does not know the exact number, for new branches and companies are opening today.

People can read about Branson’s ups and downs in his books. For example, the title Screw It, Let’s Do It sounds pretty encouraging. The businessman’s primary recommendation is to listen more and speak less; it is necessary to begin even if there is no guarantee of success.

The man’s courage is also well-known. He loves extreme sports and tried to break world records. Branson crossed the Atlantic Ocean by a paddleboat and flew around the planet by plane.

The book The Virgin Way: How to Listen, Learn, Laugh and Lead was released in 2014. The business king urges people to work on one’s personality and learn how to survive in harsh conditions. Richard also motivates young entrepreneurs online and shares much useful information on Instagram.

Richard married his first wife, Kristen Tomassi, in 1972. They spent seven years together and divorced because of the woman’s cheating. Further on, the businessman lived together with Joan Templeman, but they married officially only in 1989.

Joan inspires her husband and gives him advice when necessary; she helped him develop many business ideas. The couple has two children, Holly and Sam.

Virgin Group continues to function today. On May 30, 2018, the corporation showed the tourist space ship test; Richard Branson recorded the flight of SpaceShipTwo and presented the video to the broad audience for the first time.

It was the first flight after the tragic events in 2014 when a pilot died. However, the second launch was fortunate. The businessman is determined to go to space with Virgin Galactic and continues to prepare. The world is likely to learn the exciting news soon.