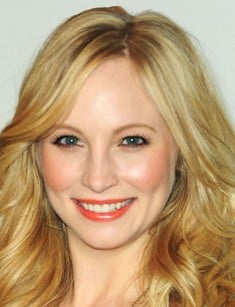 Candice Accola is an American actress who became famous after the 2009 series The Vampire Diaries.

The charming blonde girl was born on May 13, 1987, in Houston, Texas. Her father used to work as a cardiac surgeon; their mother was a housekeeper. The future star had a younger brother, Kree. They always expressed their political opinion openly and supported the Republicans.

The family did not spend much time in Houston and moved to Edgewood.

Accola took an interest in art early. At school, the girl’s teacher noticed her vocal talent and suggested the parents should develop her abilities. The family decided to move to Los Angeles where Candice had more opportunities to master her skills.

The young woman dreamed of being a singer; as a school student, she founded the music group GirlZone that organized concerts and performed in old people’s homes and youth festivals.

Candice continued to take vocal classes. Her young age did not prevent her from beginning her solo career. At school, Accola presented her demo album It’s Always the Innocent Ones.

Candice’s sizes were suitable for modeling: her height was 173 cm., and her weight was 55 kg. Thus, she participated in photo sessions and fashion shows.

The woman was interested not only in singing. As she graduated from school, she entered the world of TV series and movies. In 2005, she debuted as an actress. She appeared in episodes of the series Supernatural and How I Met Your Mother. The low-budget action movie Pirate Camp was the first project where the actress gained the lead role.

The still period followed; the actress only had minor roles in movies and series. In 2009, she auditioned for the TV series The Vampire Diaries and got accepted. Accola played Caroline Forbes, a cute blonde woman and activist, the main character’s friend and the sheriff’s daughter. The project also starred Nina Dobrev, Ian Somerhalder, and Paul Wesley.

This series turned an ordinary girl from Texas into the international star. Candice explained the success of this project:

“Vampires are romantic and sexual beings, they are very cold and cut in, but they can also be very fun and funny. This way very much teenagers in puberty, who are constantly having problems with their parents.”

Candice recorded soundtracks for the series; they could be heard in several seasons. Although the actress was always busy with The Vampire Diaries, she also appeared in several other projects: The Truth About Angels, Dating Rules from My Future Self, and Kingshighway.

Candice Accola’s biography is full of romances with actors, musicians, and photographers. When she was working on the series that brought her the global fame, the news about her first romance came out: Candice was dating the Hollywood photographer Tyler Shields. At that period, a weird situation happened: in 2009, the police arrested Accola, Shields, Nina Dobrev, Julia Smart, Kayla Ewell, and Sara Canning for the public disturbance. The problem was solved quickly, and the charges were dropped.

In 2010, Accola started dating Steven McQueen who participated in the TV series The Vampire Diaries. The significant number of scenes together worked out: the actors felt attracted to each other. Fans learned about the romance from the Internet: somebody posted the photo of the couple kissing.

For the first time, they appeared in the Californian nightclub ChiChi. However, things were not smooth: both lovers had partners who had no idea what was going on. As long as the photos of Accola and McQueen kissing went viral on the Internet, the actress and the photographer broke up immediately.

There were many speculations about Candice’s another colleague, Joseph Morgan. They played passionate lovers who could not make their relationship clear. As a result, journalists began to spread rumors about their affair. Still, they were not confirmed: the actors were friends outside the stage, but they did not fall in love with each other.

In 2011, when Candice visited the great Superbowl show, she saw Joe King, the guitarist of the music group The Fray. Suddenly, the cheerful and sociable young woman turned into the shy one; she did not dare to make an acquaintance with the man. In one of her interviews, she laughed at that situation and said she was so frightened that she did not even give him her phone number, so it was Nina Dobrev who helped her.

Thanks to Candice’s friend and colleague, Accola and King started dating. Two years later, in May 2013, Candice posted a photo on her Instagram and wrote: “Cheers from the future Mr.&Mrs. Joseph Aaron King.”

Thus, the whole world learned that the musician and the actress got engaged during their trip to Florence. She told People:

“I can’t even think about [the wedding] yet. We’re just enjoying the engagement with our friends and family right now.”

It was difficult for Joe King to chose a ring: Candice rarely wore jewelry and preferred vintage items. However, she liked the ring that her future husband gave her.

On October 18, 2014, the wedding of the stars took place; it happened in New Orleans, the so-called city of love. Candice’s friends and series colleagues were present at the ceremony. The next year, the couple announced their daughter, Florence May King, was born. The parents chose this name to honor Florence, the place where they got engaged.

After the series The Vampire Diaries, Accola had no projects for a while: the woman devoted herself to the family. In 2018, she appeared in the series The Originals and The Orville.

Today, Candice’s photos are published in glossy magazines; the artist talks about her happy life and the desire to have more children.

Just like her parents, Candice King actively expresses her opinion on many subjects; for instance, she visits events related to the protection of LGBT people’s rights. The actress organizes charity actions aimed at the reduction of suicides among LGBT teenagers. 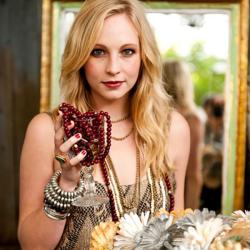