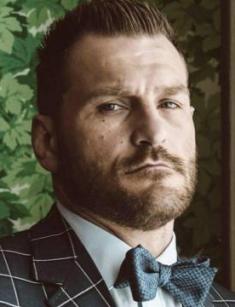 Stipe Miocic is a professional mixed martial artist and UFC heavyweight champion. His career has attracted the attention of fans and analysts thanks to the fights with Alistair Overeem, Mark Hunt, Roy Nelson, and other athletes.

Stipe Miocic was born on August 19, 1982, in Euclid, Ohio. The American fighter has Croatian ancestry. His parents immigrated to the United States but adhered to the traditions of the native culture, upbringing up their son. Therefore, the flag of Croatia sometimes flies over the athlete’s house. The boy grew up in an atmosphere of respect for his origin, although his friends used to call him Steve, which was more typical for the USA.

When Stipe’s parents divorced, his father returned to his homeland, and the son stayed with the mother. His grandparents participated in his upbringing. The boy maintained relations with the father, but he also established a warm relationship with his stepfather and younger brother. The athlete's family supports any of his endeavors, and his mother took all measures to ensure that her son could fulfill his potential in the chosen direction.

Miocic was fond of sports from a young age. He played baseball, was interested in wrestling and attended football classes at school and college. As a baseball player, Stipe played for the Vikings, which helped him during his studies at Cleveland State University.

Even the leaders of the US baseball league noticed the guy’s potential. Although Stipe achieved excellent results, he felt that his heart was not in baseball. After completing his studies, the man devoted himself to boxing and wrestling, while simultaneously graduating from university and majoring in marketing. The athlete made a living, working as a security guard and a fireman. He was even a paramedic for a while.

Stipe Miocic made his boxing debut at the Golden Gloves tournament, which involved amateur fighters. The athlete became the state champion. Achieving this goal, Stipe started a professional martial arts career and in 2010, faced Corey Mullis. A few seconds before the end of the match, Miocic knocked out the opponent and became the winner.

The North American Allied Fight Series, a Cleveland promotion, signed a contract with Stipe, and the guy confidently defeated one rival after another. In 2011, he fought against Bobby Brents and won the bout by a knockout for the sixth time. The NAAFS Championship title was a good reason to get an invitation from the UFC. The heavyweight fighter joined the ranks of outstanding fighters.

Before cooperation with the UFC, the athlete did not fight abroad. He participated in bouts in Cleveland and Worcester. He made his UFC debut against Joey Beltran. It took place on October 8, 2011, in Houston and was not easy. But Miocic finally won the fight via unanimous decision.

The following year, the fighter faced such rivals as Shane del Rosario and Philip De Fries. Both fights ended with his confident win, although it was followed by the loss to Stefan Struve. However, it was not easy to break Miocic’s spirit. He could lose with his head held high, so he continued to move towards new victories, which were not long in coming.

From 2013 to 2017, Stipe had a lot of triumphs, but they were punctuated with losses to rivals. However, the victory in the bout against Gabriel Gonzaga paved the way for the fight with Junior dos Santos. The enemy refused to fight due to health problems and was replaced by another rival. The bout with Santos was shifted and took place in 2014.

It played a significant role in the career of Stipe Miocic, so the fight caused a stir. Santos won the bout, but the fans of Miocic were not discouraged because the athlete proved himself to be a formidable opponent.

In 2016, Miocic won the UFC champion title, defeating Fabrício Werdum, and subsequently defending his award two times. He faced Santos for the second time in 2017. Miocic became the winner in the rematch, having got the championship belt. Stipe defeated the rival by TKO and earned a significant income in the UFC.

Stipe Miocic’s life is closely related to sports. Any of his achievements become the merit of the family, which supports the fighter in every competition. Stipe has a wife, whose name is Ryan Marie Carney. The woman has French ancestry. They met when the spouses were young, and the age difference of 5 years did not become an obstacle to the development of their relationship. Stipe’s wife earned a medical degree. She began her career working in a SPA salon.

Ryan takes any victories and defeats of her husband to heart, and she tries to inspire him to new triumphs. In August 2018, an important event happened in the personal life of the couple because they had a daughter. Stipe Miocic informed about it, posting a photo on his Instagram account. According to the athlete, the most important thing in his life is to do everything possible to support the family and children.

It is interesting that Stipe Miocic easily combines a professional sports career with the work of a firefighter. He tells about his everyday life to followers on a personal page on the social network.

The fight against Santos held in 2017 became a significant event before a short break. Already in the winter of 2018, the athlete defended his title in the fight against Francis Ngannou for the third time. He won the bout by unanimous decision. The match became a landmark for the fighter because he set a record for most consecutive title defenses for the heavyweight championship.

In 2018, he became the only fighter with the longest heavyweight title reign in UFC history. In the next fight for the heavyweight title, Miocic lost to Daniel Cormier, who put out the victory by knockout.

There are several interesting facts about Stipe's career. He holds the record for the most strikes landed in a fight. So, during the battle with Mark Hunt, he landed 361 strikes. Miocic has mainly won by a knockout, but in the bout against Bobby Brents, the rival asked to stop the fight because he could not endure punching.

Stipe Miocic also set a record for the fight-night bonus awards from the UFC, receiving it eight times.

The athlete says that he considers Mirko Filipović, an MMA fighter, to be his idol.