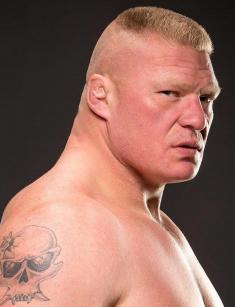 Brock Lesnar is an American wrestler, known for the participation in MMA fights. The athlete is the ex-UFC Heavyweight Champion.

The full name of the fighter is Brock Edward Lesnar. He was born on July 12, 1977, in the city of Webster, South Dakota.

Brock became interested in martial arts in childhood. The boy inherited the perseverance and responsible attitude towards workouts thanks to German ancestry. When he lived on the parents’ farm, he trained continuously on his own and improved his fitness.

At a young age, Brock became a member of the wrestling team. During the first fights, it became clear that no one could beat the athlete because he won 33 matches for a year. When Lesnar entered the University of Minnesota, he continued wrestling. The young man combined training with a part-time security guide job.

In 1999, Lesnar competed in the NCAA Division I heavyweight wrestling championship, where he was a runner-up. A year later, the wrestler became the Heavyweight Champion. Upon graduation from college, Brock could boast great achievements. He had 106 victories and only five losses. The athlete was the NCAA Champion, the Big Ten Conference Champion, and the two-time NJCAA All-American.

When he graduated from the university in 2000, the fighter accepted an invitation to cooperate with the World Wrestling Federation. He continued training under the guidance of Curt Hennig, but the beginning of his career was not impressive. The man injured his knee, and in 2001, he was arrested for suspicion of possessing large amounts of anabolic steroids, although later the charges were dropped.

The same year, Brock joined a tag team known as The Minnesota Stretching Crew, and together they won the first titles. He also made his debut in the TV show at the same time. Together with Shelton Benjamin, a university roommate, Brock defeated Rico Constantino and then snatched victory from Kurt Angle. The athlete managed to demonstrate his superiority over Al Snow, Spike Dudley, and other wrestlers.

Wrestling is famous for scandalous behavior and unpredictable actions of fighters. Lesnar gained a reputation as an emotional and hot-tempered fighter. In 2002, he fought against Paul Heyman. In the final, after the rivals' speech, Brock had to fight against the Hardy Boyz, Jeff and Matt.

Later, at the Backlash event, the athlete faced off against the wrestlers individually and was defeated. In a subsequent match against Matt Hardy in Glasgow, Lesnar got revenge for the defeat and won the fight. There were further fights against these wrestlers, and Lesnar triumphed again.

Bubba Ray Dudley and Rob Van Dam, Ric Flair also could not resist the pressure of the fighter. In 2002, Brock won the King of the Ring title. During this period, the athlete used the nickname “The Next Big Thing.” When he joined the SmackDown! Brand, the athlete faced off against Hulk Hogan and The Rock.

After defeating the latter at SummerSlam, Lesnar became the youngest WWE Champion at the age of 25. The fighter’s rapid rise to the top of WWE.

In 2002, he faced off against The Undertaker during the match at Unforgiven. The match ended in a double disqualification, with Lesnar retained the title. Lesnar defeated The Undertaker again at No Mercy, this time in a Hell in a Cell match, then at Rebellion. He could not defend the championship against Show at Survivor Series. This defeat was the first for Brock on the list of fights to retain the title. The same thing happened in the match against Angle.

Brock Lesnar fought against Big Show several times in the octagon and defeated the rival at the Royal Rumble. He also defeated Angle, Benjamin, and Haas. At WrestleMania XIX, Brock won his second WWE championship. Brock resolved conflicts and relations problems in 2002, winning the matches in the octagon.

In 2003 and 2004, the fighter participated in Survivor Series and the Royal Rumble. Each bout allowed the opponents to enter the ring and interfere in the fight. Therefore, Lesnar became a member of the Royal Rumble at No Way Out. The participation of the athlete made him a champion and caused feud with Goldberg. They solved the conflict at the WrestleMania XX, which Brock lost.

Brock cut ties with WWE. During this period, the fighter even was a player for the Minnesota Vikings in the National Football League. The problems with the matches schedule made the athlete return to the fights and sign a contract with the New Japan Pro-Wrestling Co., Ltd.

In 2005, Lesnar won the IWGP Heavyweight Championship and defended his title for the second time against Akebono and Giant Bernard in 2006. Kurt Angle managed to defeat Brock in several bouts in 2007. This match in the octagon was the last for Brock before he returned to WWE. Later, the athlete collaborated with MMA, winning the fight against Kim Min-soo and concluding a contract with the UFC, and faced off against Heath Herring. Brock won the second fight against the rival, as well as the match against Randy Couture in 2008.

The man became the UFC champion. The fighter defended the title against Shane Carwin at UFC by submission in 2010. However, he was defeated by Cain Velasquez for the title the same year.

Another bout of diverticulitis was the reason Brock Lesnar lost to Alistair Overeem in 2011 and decided to leave MMA. He returned to the WWE in 2012. Brock fought against John Cena, and Lesnar’s opponent won the match in the octagon.

Brock won the match against Triple H at SummerSlam. In 2013, he signed a new contract with the association. The feud with Triple H and Vince McMahon during this period caused fights with Lesnar. In 2014, the fighter faced John Cena for the champion title and won it. The same year he lost the match against Fedor Emelianenko.

In 2016, Brock returned to the UFC and competed at UFC 200, winning the fight with Mark Hunt. After the match, the results of the doping test were announced, and Brock's victory was annulled.

Brock Lesnar has been married twice. His first wife was Nicole. The young woman gave birth to a daughter named Mya Lynn. The second wife of the wrestler is actress and model Rena Mero. She is a former wrestler. The couple has two sons, Duke and Turk. Surprisingly, despite the 10-year gap in age, Rena and Brock are a perfect match and an example of harmonious family life.

Lesnar does not tell the media representatives about his loved ones and does not show his everyday life. There are photos of his matches on the official Instagram page of the fighter. In his spare time, the athlete likes hunting. He lives together with his wife and children in a house in a forest located in Minnesota.

At the UFC 226 in 2018, Brock challenged the new Champion, Daniel Cormier. At that time, Lesnar was suspended from the competition. In 2018, Brock is still a strong rival, and his biography is inseparably associated with wrestling.

The number of his awards proves that there are no insurmountable obstacles for the wrestler. Brock Lesnar's sports career consists of victories and defeats, but the man deserves every title. He has more than one match ahead, and the wrestler’s managers negotiate for them.

Brock Lesnar is 190 cm tall, and his weight is 130 kg. On his chest, the man has a sword with a large handle, which became his talisman. 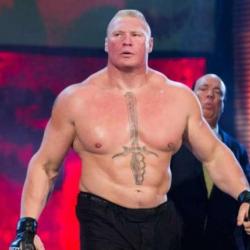