Ioan Gruffudd is known to the movie lovers by the image of Mister Fantastic from the movie Fantastic 4. The Welshman doesn't belong to the list of the first Hollywood actors, but his filmography is full of interesting roles in high-grossing movies.

In translation from the Welsh language, the Celtic name Ioan is similar to the name John. The actor’s surname is actually read as Gruffudd, but in the Russian language, it sounds in a different way. Gruffudd is proud of his unusual name and background. Welsh roots distinguish him from the group of the modern English actors.

The British actor was born on the 6th of October, 1973 in the town of Aberdare. His parents were teachers at the local school. Ioan was their first child, and that's why he had to look after his younger brother and the sister.

Sometime later his family moved to Cardiff. The boy was studying well and since childhood was interested in creativity. Music was one of his interests. Ioan demonstrated his achievements in the music - he played the oboe and even took part in one of the prestigious specialized contests in Wales.

With age, the boy’s interest in the acting skills overshadowed other prerogatives. At the age of thirteen, the future actor had his debut. The young man received the invitation to take part in the project called People of the Valley. The first role opened to Gruffudd the new world, and he made up his mind to dedicate himself to cinematography. Ioan entered the Royal Academy Drama Acting. He completed the studies in 1995; the young man became a professional actor.

Education, erudition, attractive appearance helped the beginning actor to achieve his objectives. While studying at the university, he didn’t receive any interesting invitations and was worrying about it. After the episodic roles in the shootings of the British soap operas Gruffudd’s career began to take odd - he received the offer to take part in the TV series under the title Poldark.

The roles in the movies Wilde and Titanic became the first remarkable roles works of Ioan. Having taken part in the autobiographical picture about the British writer, Gruffudd appeared in the role of John Gray on the screen and was praised by the movie critics. The spectators have noted the profound dramatic skills of the actor.

With this role, the aspiring actor attracted the attention of James Cameron who offered to the Welsh actor to play the part of the officer of Harold Godfrey Lowe in the legendary picture Titanic. The actor didn't have to wait for a long time to become famous. The picture Hornblower: The Even Chance became the next project with the participation of the British actor. Ioan Gruffudd embodied the role of the officer Midshipman Horatio Hornblower and concluded the contract for a couple of years ahead.

The p actor enriched his filmography step by step with the works in the series among which there were Warriors and Great Expectations. Since 2000 Gruffudd began to conquer American cinematography. The actor received his first leading role in the movie 102 Dalmatians. The film turned out to be very popular, and Ioan Gruffudd has become a star. Annually the tabloids told about the release of a couple of projects with his participation.

The actor’s working schedule was getting busier. He was torn between the shootings in Great Britain and U.S. One by one he took part in the shootings of The Forsyte Saga and King Arthur in cooperation with Keira Knightley and Amazing Grace. The actor received the role in the latter movie due to his amazing baritone.

The fantasy has become actor's favorite genre. The image of the character of Fantastic 4 was a new step in his career. The blockbuster was premiered in different countries all over the world. The popularity and fame have brought to the performer of the role of Mister Fantastic huge fees. Two years later Ioan Gruffudd took part in the sequel of the movie under the title 4: Rise of the Silver Surfer.

Later the actor voiced-over the personages of the animated series of DC Universe. The actor was demanded not for a long time. Gradually the popularity of the actor began to reduce, and the movies with his participation were marked with "B" category. Fireflies in the Garden, W, Horrible Bosses haven’t interested the numerous audience.

During this period Gruffudd received the opportunity to realize himself on the television. The actor's appearance, manners, accent, and talent were appreciated by the producers who needed the creators of the images of positive characters and villains. In such a way the actor has become the participant of the following projects – Harrow, Castle, Monday Mornings and others.

In 2011 the actor embodied on the screen the role of the leading character in the series Ringer. On the movie set, he was working together with the actress Sarah Michelle Gellar. In 2014 Gruffudd became the star of the project under the title Forever in which he played the role of the American Dr. Henry Morgan who specializes in the disclosure of the murders.

Ioan Gruffudd found his happiness in the personal life after the shootings in the series 102 Dalmatians. On the movie set of the series, the actor met the actress Alice Evans. The colleagues began to have romantic relations. They have been together for seven years and got married in 2007. They celebrated their wedding in 2007 in Mexico.

Even ten years later the spouses still have passion and feelings. In 2018, after 11 years of the marriage, Gruffudd declared his love to his wife and published the photo from their wedding on his Instagram page.

Despite the great popularity and millions of the girls who are ready to become the couple to the British actor, he is faithful to his wife. In the marriage with Alice Evans, Ioan Gruffudd has two children. At present, he is a caring father of two daughters, Ella Betsi and Elsie Marigold. Nowadays their family has settled in Los Angeles.

Ioan enters the list of the popular Hollywood actors friends due to his friendship with Jamie Bamber. They got acquainted during the shootings of Hornblower: The Even Chance and found soulmates in each other, and since then they spend a lot of time together. They even have the apartment which they pursued together.

It's just impossible to imagine the biography of the British movie actor without the shootings. He still appears on the screen, gives interviews and takes part in the shootings for the covers of glossy magazines. In 2018 Ioan Gruffudd took part in the picture The Professor and the Madman directed by Farhad Safinia. The British-Irish drama again enabled the actor to realize his drama skills, and he took such an opportunity.

In the spring of 2018, the project Harrow was released on the TV screens. Dr. Harrow in the embodiment of Ioan Gruffudd is a talented and skilled pathologist whose professional achievements are highly appreciated that’s why people forgive him his strangeness. But Dr. Daniel Harrow has a secret which is about to become revealed, and it can ruin his family and career. 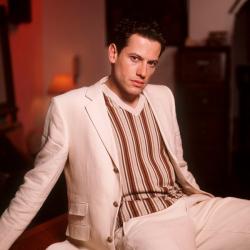