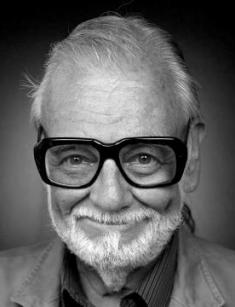 In the 21st century, it is difficult to surprise somebody with the movies about zombies, which are stamped almost every year: we can say that these archetypal bloodthirsty creatures have become a part of the popular culture. Indeed, the topic, which discusses the risen corpses from the graves, is a kind of a mainstream thanks to the director George Romero because he pleased the audience around the world with his cult horror movies Night of the Living Dead, Dawn of the Dead and Day of the Dead. The modern filmmakers draw inspiration for their new stories from these movies.

In the winter of 1940, George Andrew Romero first saw the light in the Bronx, North of Manhattan. The future filmmaker grew up and was brought up in an average international family: his father was a commercial artist, was Cuban and his mother had Lithuanian roots. George's parents were Catholic believers, so the boy went to the parish school.

Romero became a director thanks not to chance but to regularity: when he was a 14-year-old teenager, the young man began to learn the basics of the cinema, shooting debut videos on a simple eight-millimeter camera, which was intended for an amateur cinema. After graduating from high school, Romero began his studies at Carnegie Mellon University in Pittsburgh (the faculty of theater arts and design). According to rumors, George once worked as a driver in Manhattan to be able to rent movies.

George began making various videos and commercials after studying at Carnegie Mellon University. Later, the enterprising young man founded Image Ten Productions company together with his friends. George managed to earn $100 thousand thanks to his perseverance and work. This money was spent on the creation of the movie Night of the Living Dead (1968) of Romero, which was the beginning of his creative biography.

Initially, the term "zombie" was connected with the traditional African religion of voodoo, which included various mystical practices: this word meant the word dead, that was suddenly alive because of the power of magic, which connected with mythology and religion. Earlier, before the debut of Romero, there were two movies on this subject, which strongly associated with the victims of voodoo shamans, these movies were White Zombie (1932) and The Plague of the Zombies (1966).

But George became the director, thanks to whom the popularization of animated corpses in the cinema began. The director put meaning into his work and meant an absolute revolution by "zombification," as well as belonging to the crowd and the majority.

The movie Night of the Living Dead of Romero and John Russo tells the story of a brother and sister, who go to the cemetery to visit his dead father. Suddenly, young people notice a moving man, who looks like a dead man. Johnny dies and Barbara flees and hides in an abandoned house, fighting in a fight with a flesh hunter, the rebels occupy this house from the graves. Later, some elements from this movie became a kind of stamps, as the followers of George widely used them.

It is a black and white movie, which was shot for $114 thousand, it became a classic of the genre. However, the full-length debut of Romero could be a comedy because the director planned the movie, telling about alien beings. By the way, Romero's budget was so modest that actors had to be recruited from the local Pittsburgh theater. The main role was played by Dwayne Johnson, which was considered very original because it was not accepted to give a heroic role to black actors in those days.

In 1972, Romero became the author of the movie Season of the Witch and he made a fantastic action movie Mad Men in 1973. He pleased connoisseurs of corn syrup and scarlet food dye in the movie, removing the eccentric bloody movie Martin a year later. The work of the filmmaker changed the stereotype about vampires radically, which was formed thanks to the movie Dracula and Romanian folklore. The movie tells the story of mentally ill Martin, who puts the ladies sleeping pills and then drinks their blood.

In 1978, he showed the audience the movie Dawn of the Dead, a cult splatter, continuing the theme of the zombie Apocalypse. There are a lot of violent scenes in the movie, so the censors threatened the director to put the category "X" if he does not agree to cut the most shocking parts. But George did not want to get rid of the highlight of the movie, so he managed to negotiate with distributors. The movie was shown in theaters without age restrictions officially, although it was indicated in trailers and on advertising banners that those persons were allowed to movie screening, who were not younger than 17 years old.

In 1982, viewers saw a movie called Creepshow. It is a collaborative movie of George Romero and Stephen King. This movie is created thanks to the exciting comics of the 1950s. It consists of movies (Prologue, etc.), which are similar to the classic movies Tales from the Crypt. Such famous actors as Hal Holbrook, Adrienne Barbeau, Fritz Weaver, Leslie Nielsen and many others participated in this anthology. In 1987, the sequel Creepshow 2 of Michael Gornick was released (Romero acted as a screenwriter in this movie).

In 1985, the master continued to release his movies and became the author of the movie Day of the Dead, which was a sequel to the previous two movies of Romero, which related to the zombie theme. Although the movie, unlike its predecessors, did not gain grandiose fees at the box office, George said that it was his best movie. In 1988, Romero shot the drama Blood Monkey and produced the movie Night of the Living Dead, a color remake of his debut creation in 1990. Some moviegoers associate the name of George Romero with this movie but it is worth noting that the director was Tom Savini.

A new century begins for George with the surreal movie Bruiser (2000). The movie tells the story of Henry Creedlow (Jason Flemyng), a man, who tries to be exemplary in everything. But when he wakes up literally without his face, the young man loses the most important thing, his individuality. Then Romero continued his favorite subject and shot a lot of movies such as Land of the Dead (2005), Diary of the Dead (2007) and Survival of the Dead (2009), and he wrote the script for the movie The Crazies in 2010.

Romero never liked excessive chatter and believed silence gold. He was always convinced that horror movies were not related to a large budget and thought that a good movie could be made for free and without the use of special effects. As for his personal life, the director met with his future wife actress Christine Forrest on the set of the movie Martin in 1976. Then Forrest starred in many works of her husband: Knightriders, Creepshow, Monkey Shines, etc.

It is known that Christine gave George two children but their couple broke up. Also, Romero was married to a costume designer Nancy Romero from 1971 to 1978 but there is not a lot of information about this woman. His following beloved was Suzanne Desrocher. In 2011, the lovers legalized their relationship. Also, according to some report, the director has a daughter Tina.

On July 16, 2017, George Romero died in the Canadian capital. The cause of his death was a brief but brutal fight against lung cancer. The great creator of zombie horror died in his sleep quietly and he listened to music from his favorite movie The Quiet Man (1952) in the last minutes of his. George Romero had a net worth of $35 million.

The famous directors around the world honored the memory of the brilliant creator. Slash (Guns N’ Roses), Kirk Hammett (Metallica), Rob Zombie and others expressed their condolences.