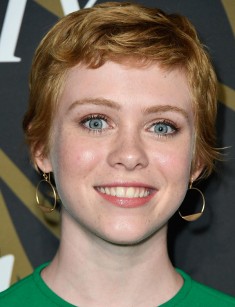 Sophia Lillis is a cute red-haired girl who looks more like a boy. She became famous overnight in the summer of 2017 when the film It based on the extraordinary novel by Stephen King was released in America. The most anticipated premiere of the year did not disappoint viewers. Director Andy Muschietti managed to convey the idea and atmosphere of the story written by the horror genius.

Sophia got the role of Beverly Marsh, the only girl in the group of teenagers, the members of "The Losers Club." Critics appreciated the actress's acting highly because the girl stood out from her peers and partners in the film. Lillis also believes that this role has become a bright spot in her career. She could brilliantly show the character of the schoolgirl, who was on bad terms with classmates.

Sophia has recently become famous, so journalists have not yet managed to get the details of Lillis’s childhood and personal life. There is little information. Sophia was born in a respectable family in February 2002 in the American town of Crown Heights. She is on friendly terms with stepbrother Philip. A stepfather brought up the girl, and he helped her to start an acting career. At first, she played in a short film that was shot by the stepfather.

A few viewers have seen the movie, but they, as well as her parents, were impressed by the girl’s acting. During the family meeting, they decided that she should develop acting talent. So, Sophia took classes at the Lee Strasberg Theatre and Film Institute in Manhattan. At the school, one of the teachers noticed the novice actress and recommended her to his friend in New York City who was shooting a thesis film.

“I didn’t know what I was going to do, I just followed him,” Lillis says in an interview with WWD.

Thus, she began an acting career.

The girl’s filmography is not yet diverse. However, her whole life is before her. Critics and senior cinema colleagues are confident that thanks to her talent she would quickly rise to prominence in the cinematography. Her credentials have only five movies. For the first time, she played in a full-length film in 2014. She got a role in the film adaptation of Shakespeare's “A Midsummer Night's Dream." It is interesting that almost all movies with Sophia have a dark story.

For example, the film 37, shot in 2016 and based on real events, has taken a rightful place in American cinematography. The powerful drama tells about the murder of a girl when 37 people witnessed the killing.

Lillis confessed to journalists that she did not understand why the "terrible" topic was following her. It is a new side of her life. After all, her happy childhood continues and has good parents, friends, great opportunities for realization.

“It seems that terrible things attract me,” she says. “But, I don't mind.”

Then she got the breakthrough role of Beverly Marsh. The puny, 1,52-meter-tall girl with short red hair and freckles on her face, suited better than anyone else for a member of a group of teenage outcasts who would face a dreadful summer struggling with an evil creature. The young actors did not see a terrible clown until the beginning of filming. According to the director, they must show real horror.

Lillis admits that the character no doubt caused fear. But there was no trace of it when Bill Skarsgård as Pennywise nicely said: “Hi, how are you?”. The process of filming and what the viewer sees on the screen are different things; the set was full of people, the teenagers felt safe. The work in the movie was easy for Sophia, the colleagues helped her and suggested how to play this or that scene.

“I was surrounded by sympathetic people who understood that we stood at the beginning of our creative career,” she says.

The actress watched the film It twice. Not only the representatives of the film crew and actors, relatives and close friends but also school friends, neighbors, parents’ friends attended the premiere.

The girl told the WWD correspondent that her nerves were on edge, especially when she saw her face on a large screen because she didn’t imagine her character that way. Despite her young age, Sophia Lillis has already provided advice to novice actors. However, they can be useful for an average person:

“Do not sit still, visit new places, discover new things. Managing your own life is not an easy job, especially when you are still a student, but it's worth it.”

The girl is sure that novice actors need to acquire as many skills as possible and not to grudge time for it. For example, she had to learn roller skating for the role of Beverly, as well as the basics of cheerleading within a week.

After the participation in the movie that had already grossed millions of dollars, Sophia returned to her ordinary life of a teenager. Soon she had to plunge into school life. She jokes that speaking about "How I spent the summer," she will talk about the unforgettable escape from the evil clown.

The main heroine of the horror film has not recently been interested in social networks, but after the project, they became a part of her life. She is an active Instagram user. By the way, there are mainly black and white photos. The reason is that while working on It, she took a professional camera of her stepfather and fell in love with this shooting mode. Sophia has recently registered on Twitter, but she has not liked the site. She uploaded one photo and said: “I’ll try this Twitter thing,” and then she calmed down.

At school, there is a theater studio where she sings and dances. Her hobbies include playing the piano, drawing (although the girl has confessed that she is restless and cannot spend a lot of time with a pencil in her hand). She even learns roller skating. The idols of the young actress are Bill Murray and Steve Martin.

“I love comedians,” she said in an interview with Issue magazine.

The shooting influenced Lillis's network of friends. It included her "fellow losers," with whom she lived side by side for several months. She keeps in touch with everyone including Jaeden Lieberher, Jack Grazer, Finn Wolfhard. The guys chat on the Internet, congratulate each other on their birthdays by phone.

Viewers will soon see Sophia on the screen again. This time it will not be at the cinema but on TV sets. After It, the actress immediately received a proposal to participate in the HBO television series Sharp Objects. She will play young Camille Preaker, while Amy Adams portrays the adult title character.

Lillis’s plans for the future are connected with an acting career. She hopes that the next role will be "less depressing," in the film with an exciting plot. The girl dreams of playing in projects of her favorite directors, Whit Stillman, and Wes Anderson. According to the actress, they belong to the movie geniuses. 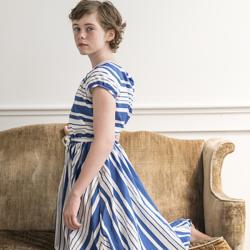