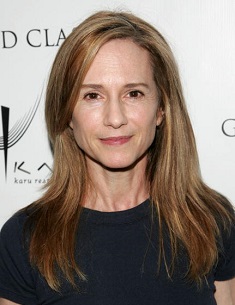 Holly Hunter is an American actress and film producer. She received recognition mostly after her work with Coen brothers in Raising Arizona (1987). Hunter is the owner of 45 awards, including BAFTA Awards, Oscar, and Primetime Emmy.

Holly Hunter was born in Georgia, the U.S. in 1958. Her family consisted of her mother Opal Marguerite, a housewife, father Charles Edwin Hunter who worked as a farmer, and also six elder siblings. Hunter gained an interest in acting since the young age.

When Holly studied at her high school, she started acting there and performed in such plays as Oklahoma, Fiddler on the Roof, etc. Then, Hunter attended the Carnegie Mellon University, where she got her degree in drama. After this, she had some performances at City Theatre in Pittsburgh and later moved to New York.

When Hunter came to New York, she started living with another actress, Frances McDormand. Once, Holly got trapped in the elevator not alone but with Beth Henley, a playwright. They had a conversation, and eventually, Holly appeared in his plays Crimes of the Heart and The Miss Firecracker Contest.

In 1981, Hunter starred in her first film, The Burning. Next year, she moved to Los Angeles, appeared in some television projects and drama film Swing Shift (1984). Also that year, Holly worked with Coen brothers for the first time. She appeared in their Blood Simple as a voice on an answering machine. In 1987, Hunter played the primary role in Coens’ Raising Arizona, and that can be considered as her breakthrough. Besides, she also starred in the Broadcast News (1987), and for that, the actress got her first nominations.

After this success, Hunter starred in Miss Firecracker (1989), the film adaptation of Henley's work, and Always (1989), a movie of Steven Spielberg where Holly worked together with Richard Dreyfuss. In 1991, Hunter starred with Dreyfuss again, in Once Around. Later, she was nominated for two of her 1993 movies, The Firm, and The Piano, for Academy Awards.

In 2000, Hunter had another project with Coen brothers – the crime film O Brother, Where Art Thou? In 2003, the actress starred in Thirteen, the teen drama about girl troubled with classic issues – sex, drugs and other difficulties. Holly played the mother of a teenage girl.

Eventually, besides acting, Holly became an executive producer. One of her most successful projects was Saving Grace (2007–2010), and for her part, the actress received a lot of awards. In 2016, Hunter starred in Batman v Superman: Dawn of Justice as Senator Finch. In 2018, Hunter had a leading role in the HBO drama series Here and Now together with Tim Robbins.

In 1995–2001, Holly was married to Janusz Kamiński. Her husband was a Polish film director who has developed his career in the United States. Since her divorce, Hunter has been dating an actor Gordon MacDonald. The couple met at the San Jose Repertory Theatre when they played lovers in By the Bog of Cats. In 2006, Holly and her boyfriend welcomed their happiness: Hunter gave birth to two children who turned out to be twins, Claude and Press.