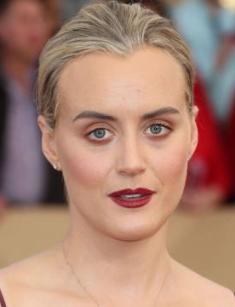 One can hardly imagine that beautiful Taylor Schilling used to be a shy, introverted teenager full of complexes. The actress became famous for the role of Piper Chapman in the series Orange is the New Black. Thanks to the popular drama show, she has had many prestigious nominations including the Golden Globe.

The would-be artist was born in 1984 in Boston. The parents had nothing to do with art: the mother worked as an administrator, and the father was a prosecutor. Soon after the girl was born, they divorced; little Taylor lived in two homes.

Taylor dreamed of acting; the series ER impressed her. The girl showed her talent at school: she participated in the musical Fiddler on the Roof, and teachers recommended her to develop her skills.

Speaking of her childhood, the artist has no self-pity and calls herself “a self-proclaimed introvert”, “an awkward giraffe with glasses”, and “a wallflower”. Taylor used to lack confidence and had to learn how to love her body, face, and heart. She has managed to overcome her fears, but other people’s opinions still paralyze her sometimes.

When the young woman graduated from school, she entered Fordham University and continued to participate in various plays. Four years later, Taylor gained a Bachelor’s degree and enrolled at New York University's Tisch School of the Arts. Schilling had to quit her studies to participate in auditions. The would-be star worked part-time as a nanny.

The actress did not receive a role at once: she frequented auditions until 2007 when she was offered a secondary part in Dark Matter. There was no breakthrough, and Schilling continued to look for new projects.

Finally, 2009 brought the lead role in the series Mercy. The dreams began to come true: Taylor had been dreaming of such a story. The artist personified tough and courageous Veronica Flanagan Callahan, the veteran of the war in Iraq.

Surprising as it may seem, Schilling did not go to audition in person: she only sent her photos and recordings to the producers. When the creators of the series met the woman, they were mesmerized by her beauty and diligence and immediately accepted her. Unfortunately, the series was closed after the first season: it could not compete with more popular projects, such as Grey’s Anatomy.

In 2011, Paul Johansson invited Taylor to play one of the main characters in the screen adaptation of the bestselling novel Atlas Shrugged. The actress personified Dagny Taggart, the owner of the international railway company. The movie turned out to be a failure: it grossed only $4 million while its budget was $15 million.

In a while, Taylor gained a role in the screen adaptation of Piper Kerman’s memoirs Orange is the New Black. The premiere took place in 2013. Six seasons have been released so far. Schilling’s character is a lesbian who gets imprisoned because of her ex, Alex. Although the woman is not like the old offenders, murderers, and lunatics around her, she manages to adjust to the new environment soon.

There is a curious twist in the story: Alex is also imprisoned; the ex-girlfriends reunite. The series contains many adult scenes, and the script is peculiar; critics appreciated the project. Taylor has been nominated for Emmy and the Golden Globe two times.

In 2017, the artist appeared in the crime comedy Take Me and personified a kidnapped victim.

The artist does not like to talk about her personal life: her private space is not for journalists. Taylor is not married, and she is not going to have children in the nearest future.

Rumors had it Schilling had an affair with Zac Efron when The Lucky One was filmed, but no evidence followed.

In one of her interviews, the artist mentioned her first love was not returned, and it was a painful experience for her.

Similar to Piper from Orange is the New Black, the celebrity is gay. Today, she is dating the writer and musician Carrie Brownstein who is ten years older than the actress.

The artist is not a big fan of social networks. She posts about one or two pictures per month on Instagram.

Taylor practices transcendental and insight meditation; it helps her concentrate and stay calm and peaceful. She prefers to spend her free time with old friends. According to the woman, optimism is her one of her key strengths; it gave her a chance not to feel discouraged when auditions were not successful. Although the artist has to face some problems because of her positive thinking, she appreciates her restless nature.