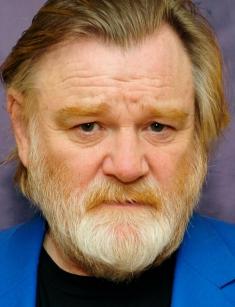 Brendan Gleeson is a popular Irish actor, director, and scriptwriter. He earned his fame for the role in Harry Potter movies and the collaboration with the director and playwright Martin McDonagh (Six Shooter, In Bruges, Calvary). Gleeson has won Emmy and BAFTA awards; besides, he has had several nominations for the Golden Globe.

Brendan was born in Dublin, Ireland, on March 29, 1955. The boy spent his childhood in the home town. He was fond of reading, especially the classic literature, which motivated him to be interested in acting. Gleeson studied drama and joined a local troupe; he also learned how to play the violin. The music skills proved to be useful later.

After graduation from school, Brendan entered Catholic Belcamp College in Dublin. Later on, the young man continued his education at the Royal Academy of Dramatic Art. He performed at city theaters, and critics frequently marked his drama talent and accurate work on William Shakespeare’s and Anton Chekhov’s plays.

In a while, Brendan decided to return to his native country. However, there was no suitable position for the actor; he had to become an English and Irish teacher in a middle school. Besides, Gleeson taught English drama at Вelcamp school located not far from the city.

Brendan came back to acting at the age of 34: in 1990, he debuted in the drama The Field. Soon, the roles in unpopular Irish and British movies followed. The artist even participated in Hollywood projects filmed in England.

The historical drama Braveheart (1995) brought Gleeson the first success. The man got the role of Hamish Campbell and collaborated with Sophie Marceau and Mel Gibson. It was Gibson who invited Brendan to this project. Braveheart won five Academy Awards and made the actor famous: directors and producers were inviting him to their works. Glossy magazines published Gleeson’s photos along with the biggest Hollywood stars.

In 1996, the actor participated in Michael Collins with Liam Neeson and Julia Roberts. The next year was marked with six projects; the drama A Further Gesture and the thriller Turbulence brought the lead roles. Although Brendan was popular in Hollywood, he also accepted Irish directors’ offers. For instance, in 1998, he appeared in The General as the Irish criminal Martin Cahill.

The movie Troy showed the audience a different image: the actor personified the king of Sparta Menelaus. In 2002, Gleeson played Walter McGinn in Martin Scorsese’s Gangs of New York.

The crime drama In Bruges (2007) marked the remarkable collaboration with the playwright and director Martin McDonagh. Critics also reviewed the duet with Colin Farrell positively. Brendan Gleeson won BAFTA and was nominated for the Golden Award for this project.

In 2010, the actor gained Emmy for the role of Churchill in the TV project Into the Storm. He was nominated for the Golden Globe. In 2012, Brendan had another nomination for this prize for the role of Gerry Boyle in The Guard. Martin McDonagh’s Calvary was notable: the artist personified Father James Lavelle.

The actor continues to please his fans by new works; he is flexible and capable of transforming into any character. Gleeson does not participate in comedies: producers and directors see him as a deep, dramatic character who has to face personal conflicts.

Brendan Gleeson is married to Mary Gleeson. Four kids were born in this family: Domhnall, Fergus, Brian, and Rory. The children are no less talented than their father. Domhnall Gleeson is developing his acting career; he appeared as Bill Weasley in Harry Potter movies and General Hux in the Star Wars franchise.

Fergus tries himself in music: the young man is a beginning composer, and some of his works appeared in Irish movies.

Brian Gleeson devoted himself to acting. Today, he plays in expensive Hollywood movies, just like his elder brother. Brian participated in Phantom Thread, Mother!, and the series Primeval and Love/Hate.

Rory Gleeson is a professional fantastic writer who graduated from The University of Manchester and created the novel Rockadoon Shore.

Brendan Gleeson is a happy person. He combines his work with hobbies, music and Irish folklore. The artist had the chance to show his musical talents and played violin in several projects including Cold Mountain.

Brendan Gleeson’s career continues to develop, and the man has many exciting roles. In 2018, he was one of the most popular Irish actors in Hollywood and participated in the movie Psychic and the western The Ballad of Buster Scruggs.

Since 2017, the artist has been working on the series Mr. Mercedes based on Stephen King’s work. Gleeson personifies a retired police officer, Bill Hodges. Soon, the audience will have the opportunity to see Brendan in new projects, for instance, the drama Frankie.