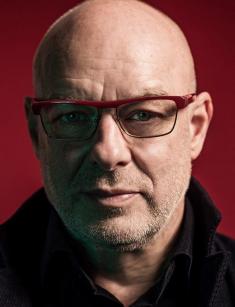 The talented electronic composer Brian Eno is considered to be the founder of the ambient genre. He began as a keyboard player and mixing desk operator in a music group; today, Eno is famous in many countries.

The future musician was born in spring 1948 in Melton, Suffolk, Great Britain. The boy’s family was religious, and the parents took their son to St. Joseph's College that belonged to the De La Salle Brothers order of Catholic brothers. The young man studied there until 16 and entered Ipswich Civic College. Although there was no particular reason to choose that school, this choice helped the composer become a professional later.

The British artist Roy Ascott founded Ipswich Civic College. The methods of teaching were different from other schools: learning was based on self-development and increase of percipience modes. In comparison, the majority of schools focused on technical subjects. Eno was interested in art since early childhood; he did not want to spend his life in an office. The young man had a burning desire to expand his horizons.

According to the composer, the musician and artist Tom Phillips influenced his worldview a lot. The meetings with Cornelius Cardew were equally essential: the young man took an interest in the avant-garde composer’s experiments and discovered something new there.

The long communication with the composer encouraged Eno to quit the old school two years later; he enrolled at Winchester School of Art. The young talent hoped to learn more about musical experiments and develop his skills there.

Still, the new school turned out to be a traditional educational institution; Brian had to experiment in secret. Teachers tried to convince the student to give up his “nonsense” experiments and pay more attention to his studies. One can see in the old pictures that Brian had a long hair at that time; he looked like a hooligan and idler.

Against his teachers’ recommendations, Brian and his course mates founded the group Maxwell Demon. The young people recorded only one song; it was the only work in Eno’s discography for a long time.

Professional music entered Brian’s life in the early 1970s: the young man joined the group Roxy Music with Bryan Ferry and Graham Simpson. Eno played the keyboard and gave concerts with the band from the very beginning. Although the members often changed, Ferry always remained the leader.

The artists’ compositions combined stylish performances, virtuosity, and ironic lyrics; melancholic songs predominated. Brian spent in the group a year and a half and then decided to develop his solo career. In 1973, the first album Here Come the Warm Jets was released. Besides, Brian Eno recorded tracks with other popular musicians.

The young composer experimented in various genres and tried to find something to his liking. People enjoyed his works with David Bowie, Paul Simon, John Cale, Natalie Imbruglia, and other popular figures. Few fans know that Eno created the theme for Windows 95: it sounded when a computer was turned on and off.

By 1978, the man presented four more albums; Another Green World and Music for Films were among them. The next four years were marked with the series of Ambient albums. According to critics, the first one, Ambient 1: Music for Airports, contributed to the development of the ambient genre substantially; Brian became one of its founders. The musician did not limit himself with the same style and worked on experimental rock, electronic music, minimalism, and art-rock.

In 1983, the composer’s new album, Apollo: Atmospheres and Soundtracks, came out; in 1990 and 1993, The Shutov Assembly and Neroli followed. Eno was engaged in solo projects and cooperated with other musicians. At this period, the tracks with Robert Fripp, Phil Manzanera, Jon Hassell, John Cale, and so on appeared.

Since the beginning of the 2000s, the composer has not released many collections. In 2005, he recorded the album Another Day on Earth, and the next one came out only five years later. In 2014, the collaboration album Someday World with Karl Hyde (Underworld) was presented. The men were so inspired to work together that they created the unplanned album, High Life.

There is little information about the musician’s personal life. 18-year-old Eno married his first wife in 1967. When the daughter Hannah was born, the young people divorced.

Anthea Norman-Taylor became the man’s second wife; she worked as a music manager for him. In summer 1983, the media spread rumors about their relationship. In 1988, the couple married officially. Brian and Anthea have two kids: the daughters Irial and Darla.

In 1997, Eno and his family lived in St. Petersburg; further on, the man visited Russia many times. In 2010, he presented his project 77 Million Paintings at the St. Petersburg conservatory and delivered a lecture on culture.

Despite his age, Eno continues to work: he records music and participates in various projects. For example, in 2018, the documentary Megan Leavey came out; Brian’s music sounded there.

In May 2019, the man will celebrate his 71st birthday. The Internet is full of rumors about the musician’s world tour and a new album; the official sources have neither confirmed nor denied the information.