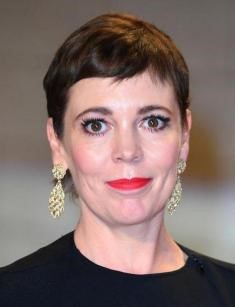 Traditionally, the entire cinema world stands in awe at the end of January. The reason is the announcement of the Academy Award nominees. At the end of the next winter month, the most outstanding actors will win the cherished statuette. In 2019, alongside Lady Gaga, Glenn Close, Melissa McCarthy, and Yalitza Aparicio, Olivia Colman has also been nominated for Best Actress. This year she has received ten nominations.

Sarah Caroline Olivia Colman (her full name) found out about the opportunity to become an Oscar-winning actress before her 45th birthday. The actress, who played the leading role of Queen Anne in Yorgos Lanthimos’s film and won the Golden Globe Award for it, was born on January 30, 1974, in the English city of Norwich.

Her parents were not connected with the stage. Mother Mary worked as a nurse, and father Keith was a professional chartered surveyor.

“They had good work ethics. I was very proud of my mother, who changed the lives of others for the better,” Olivia said to The Telegraph journalist, talking about her biography.

Her older brother is also not a creative person. He owns a large construction company, while her half-sister is a psychotherapist.

The girl's childhood was happy and filled with boundless freedom. Thus, the girl could go home only when she had important reasons. For example, when Olivia was hungry, or because it became too late. Now the woman thinks that she is cruel and does not allow her sons and a daughter to live just like she did.

At first, Olivia studied at Norwich High School, then at Gresham's School. There the young girl first appeared in a school play, but she did not think to connect her life with an acting career at that time.

Colman entered Homerton College, Cambridge, but after meeting the future colleagues, she auditioned for the Footlights Dramatic Club. Her task was to find something in the room and try to sell it. She saw a cigarette butt, and Olivia swallowed it to prove that this product was edible and nutritious. Her actions shocked other participants.

Then she learned the basics of the performing arts at the Bristol Old Vic Theatre School, founded by Laurence Olivier.

Before playing in a full-length movie, Olivia starred in TV series (Holby City, The Office) and television shows; she also participated in radio programs. Besides, the woman voiced some commercials.

Colman won the BAFTA TV Awards for the series Accused and Twenty Twelve. She received the first Golden Globe Award as well as an Emmy nomination for The Night Manager, in which Tom Hiddleston was her partner on the set.

In 2006, the romantic comedy Confetti was released, which script was entirely improvised. Olivia later admitted that this movie was her worst job. Five years later, the actress won the BIFA and Empire Awards for Tyrannosaur.

Colman has often portrayed titled persons, for example, Queen Elizabeth in Hyde Park on Hudson, Queen Elizabeth II in The Crown and, of course, Queen Anne in The Favorite. By the way, the woman considered the last character to be her dream.

The list of prominent projects includes The Lobster, which won the Jury Prize at the Cannes Film Festival in 2015, Murder on the Orient Express with a brilliant cast, the cult series Doctor Who, in which she played with David Tennant, Broadchurch and The Iron Lady, where she portrayed the daughter of Margaret Thatcher, etc.

To be in the right place at the right time is about Olivia Colman and Cambridge. When she went there, the girl not only found a favorite occupation but also improved a personal life because Olivia met the future husband.

When she participated in a student play, the girl went into the rehearsal room and saw Ed Sinclair. It was like a lightning bolt, and she thought, "I will marry him." This prediction came true in the summer of 2001.

“He was great, the most handsome man I've ever seen,” the lover joked, being lavish with her husband’s praise.

The man gave up an acting career and plunged into writing. The couple has three children who were born in August, the month when their wedding took place. In 2005, the first child, Finn, was born, two years later a son, Hall, and in 2015 the long-awaited daughter. The parents are still keeping her name a secret.

There is an interesting fact that Olivia starred in The Night Manager when she was pregnant with the last child.

“People say that I play my roles carelessly. But this is not the case because I'm just trying to be carefree at work. No matter how important it is, it will never be more important than my family. It is my formula,” the 2019 Oscar Nominee said.

Olivia Colman does charity work. She has supported victims of domestic violence and women suffering from postpartum depression, and also participated in campaigns to help cancer patients.

The Favourite with Rachel Weisz, Emma Stone, Nicholas Hoult, and Olivia Colman began its victory march in 2018, winning the awards at the Venice International Film Festival. The project was ranked by the American Film Institute as one of the top 10 films of 2018. The movie has continued to receive the awards in 2019.

The project even has an Instagram account, filled with photos and videos of filming, pictures of scenes and posters. Thousands of film connoisseurs follow the profile.

Fans do not forget to leave comments below new posts, calling the film "a masterpiece", "a brilliant and awesome work", "amazing, completely uncomfortable, strange, funny and exciting".

Since 2018, the actress has played in the TV series Les Misérables based on Hugo’s novel and in the third and fourth seasons of The Crown. On January 27, 2019, the drama Them That Follow starring Colman premiered.

What about the latest project with participation of Olivia Colman, it was the movie The Favourite, directed by Yorgos Lanthimos. In this picture she appeared together with Emma Stone, Rachel Weisz, Nicholas Hoult and Joe Alwyn. For this role Olivia was nominated for Best Actress in the Leading Role for Academic Awards 2019 and she became the winner. 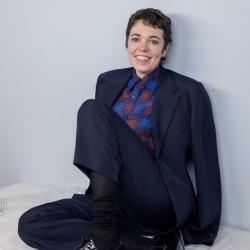