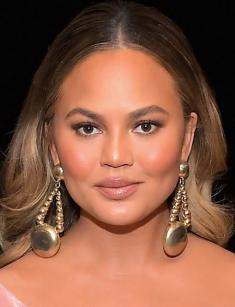 The attractive beauty Chrissy Teigen conquered the world with her exotic appearance and shapes in 2007 when her photo was published on the cover of Maxim calendar. Since that time, the young woman has been a successful model, actress, and TV presenter. However, cooking seems to be her life work: Chrissy has written two books on it and become a food stylist.

Christine Diane Teigen was born on November 30, 1985, in Delta, Utah. Her father, Ron Teigen, is a half-Norwegian and half-German; the mother, Vilailuck Teigen, has Thai roots.

The girl’s father worked as an electrician and had to move pretty often; the family followed him. Small Chris used to live in Idaho, Hawaii, Seattle. Finally, the Teigens settled in Huntington Beach, California.

Unlike the majority of her peers, Christine did not dream of becoming an actress or model: she wanted to teach or cook. When Teigen graduated from school, she started working as a salesperson in a surfing store. This is where a fashion photographer noticed the 18-year-old woman and introduced her to the modeling business.

2007 brought a breakthrough: Chrissy appeared on the cover of Maxim calendar. Thus, Teigen stopped being a catalog model and turned into a top professional who collaborated with many international brands. Gillette Venus, Olay, Nike, Skullcandy, Gap Factory, XOXO, UGG Australia, Rock and Republic, Billabong, Beach Bunny Swimwear, and other companies showed the beauty with offers. Chrissy has often been the spokesperson for campaigns of fashion houses and brands. For instance, she was an ambassador of Nine West and helped with fundraising for the organization that helped women with breast cancer.

In 2010, Teigen appeared in Sports Illustrated Swimsuit magazine; the model’s friend, Brook Decker, helped her. Chrissy received the title “Rookie of the Year” for the breakthrough debut in the swimsuit commercial. Since that moment, the model’s photos are frequently published in the magazine.

In 2011, the computer game Need for Speed: The Run presented Chrissy Teigen and Irina Shayk as its characters.

In 2014, the picture of Chrissy, Nina Agdal, and Lily Aldridge covered the fiftieth-anniversary issue of Sports Illustrated. Besides, Vogue Italy, Cosmopolitan, Glamor, and other magazines published Teigen’s photos on their cover pages.

At the peak of her fashion career, the celebrity participated in various talk shows; E!, TMZ, MTV, FUSE / MSG, and other channels eagerly invited her. Teigen was an outside expert in the popular reality show America's Next Top Model in 2013. In spring 2014, she hosted the reality show Model Employee on VH1.

At that period, Chrissy fans learned that she liked cooking. Everybody was interested: the image of the model was hardly compatible with this hobby. Soon, the woman participated in some cooking shows.

In 2013, the model appeared on Cooking channel in special programs Chrissy Teigen’s Hungry. Besides, she was a jury member at a new cooking show Snack-Off on MTV2. In 2016, the celebrity presented her first cookery book Cravings; millions of copies were sold.

The American audience loves Chrissy. In 2012, the Spike TV viewers expressed their feelings and called Teigen “Our New Girlfriend”. In 2015, nobody doubted that Chrissy was a TV star: she was invited to Lip Sync Battle and hosted the project with the musician LL Cool J.

In this show, famous people compete in lip-synching to someone else’s songs. The same year, the model was a permanent expert – a food stylist – at Tyra Banks’s talk show FABLife.

The television work gives Chrissy some acting experience. In April 2014, she debuted in the sketch comedy Inside Amy Schumer and played a relationship consultant. The next year, the model was a guest star in the series The Mindy Project.

In comparison with the majority of her colleagues, Chrissy is a steady person when it comes to relationships. Before the young woman married the singer and actor John Legend, she had been dating him for six years. They met in 2007 when the artist was working on his music video “Stereo”: since that time, they have not parted.

It is interesting that the common interests made the couple close: the musician also liked cooking. Legend gladly bakes bread and experiments with flavors. Rumors have it that the man earned his future wife’s love by chocolate and banana bread.

Year by year, fans expected the lovers to marry, but they kept testing out their relationship. In 2011, they finally announced their engagement: the musician proposed when Chrissy and John were on vacation in the Maldives. In September 2013, the couple married in Como, Italy. Brook Decker who had helped the model with Sports Illustrated was the maid of honor.

In 2015, Teigen and Legend announced that they took the IVF procedure; before, they tried to conceive but failed. On April 14, 2016, the couple’s daughter Luna Simone Stephens was born.

After childbirth, the celebrity revealed in her posts that she had postpartum depression. She confessed:

“I started taking an antidepressant, which helped. And I started sharing the news with friends and family—I felt like everyone deserved an explanation, and I didn’t know how else to say it other than the only way I know: just saying it”.

However, Chrissy came back to work four months later. In November 2016, she visited the American Music Awards ceremony in a long dress with slits almost under her armpits. The whole Internet was talking about it; the star even had to apologize for wearing such a provocative outfit.

On May 17, 2017, Chrissy’s second child, the son Miles Theodore Stephens, was born. The woman said in her interviews that her life became harmonious: a husband, children, and favorite work.

Today, Chrissy has come back to her regular schedule. She has recently presented her second cookery book Cravings-2.

The model is working on new TV projects. Fans can always read the latest news on Teigen’s Instagram page; millions of users follow her there. 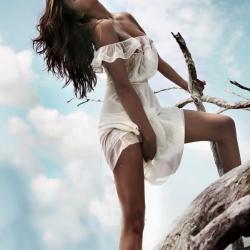