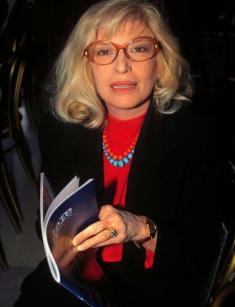 The outstanding Italian actress who was at the peak of her popularity in the sixties. It was "trilogy of alienation": The Adventure, The Night, The Eclipse. Vitti became not only a muse but also a faithful companion of the master for many years. The acting of Monica Vitti was noted by many prestigious Italian and European movie awards.

Maria Luisa Ceciarelli (the real name of the actress) was born on the 3rd of November, 1931 in Rome. Her father was Angelo Ceciarelli, her mother’s name was Adele Vittilia. The actress will make a start from her mother’s surname when choosing a creative pseudonym.

The girl's childhood wasn’t cloudless: the family was living in poverty, and he had to wear the clothes of her elder brothers. Little, fragile Monica wore broad trousers on the suspenders and big boyish boots with the layer of cotton wool inside. She didn't like herself. Moreover, the girl had a big nose and mouth - girl considered herself to be an awful ugly creature.

A poor diffident child had only one thing to do - to dream. And Monica was dreaming about the day when she will be able to have a transformation, to put on a beautiful dress and shoes and what's the most important – to look gorgeous not only in her own eyes but for others as well. These dreams brought Monica to the magic world of the theater.

The future actress performed her first roles in the amateur plays. She had her debut at the age of fourteen in the play - Enemy by Nicodemy, where she appeared as a character of the 40-year-old woman. After school, the young Italian entered the National Academy of Dramatic Arts in Rome from which she graduated in 1953. When she became a certified actress, Vitti who had already taken herself this laconic pseudonym, began to work at the stage of the theaters of the capital.

The actress debuted in cinematography in the middle of the fifties. These were the episodic roles in the pictures Ridere! Ridere! Ridere!, Minkkiturkki – Minkpälsen and Le dritte. The name of the actress even didn’t appear in the titles. During this period, to be exactly, in 1956 the young actress got acquainted with the director Michelangelo Antonioni. This meeting became a harbinger of her star career in cinematography.

By that moment Antonioni was a beginning but already well-known director who started his career at the beginning of the fifties. After he had met Vitti, he had no more doubts about the leading character of his new project about which he was thinking at that time. The tandem of the actress and director managed to be successful and in 1960 the first movie of "the trilogy of alienation" - "The Adventure" came out on the screens. This movie became a real breakthrough in Italian cinematography.

The audience was impressed by the talent of the director, as well as by the skillful acting of the leading actress. For this role, Vitti received Golden Globe and Golden Grail Awards for Best Actress and was nominated for BAFTA Awards for Best Foreign Actress. Her photos appeared not only on the covers of Italian newspapers and magazines but of European as well.

The actress achieved great success after her two roles in the subsequent parts of the trilogy – the dramas The Night (1961) and The Eclipse (1962). In these movies, she worked on the same movie set with such starts of the European cinematography as Jeanne Moreau, Marcello Mastroianni, Alain Delon.

These movies directed Antonioni became the classics of the Italian cinematography. The master focused not only on the dialogues but also on the acting of feelings, and he was called the discoverer of the "new language" in cinematography. And Monica Vitti showed her great acting skills in this sensual acting.

However, the Italian movie star was talented not only in the dramatic acting skills. She demonstrated her comedy image to the audience sometime later. Since 1965, after the break-up with Antonioni, the actress appeared on the screen mainly in this genre.

In 1968 there was released the Italian movie The Girl with the Pistol directed by Mario Monicelli. The film tells about the adventures of the provincial Italian who by a whim of fate finds herself in Scotland. For this role, Vitti won a prize at San Sebastian Film Festival and also two David Di Donatello awards. In many respects, due to the bright an expressive acting of the actress, the movie was nominated for Academic Awards.

Monica could manage to play any kind of roles – whether it was in the genre of a black comedy, a burlesque, a sitcom or farce. In 1974 the actress appeared in the movie of the famous director Luis Buñuel, who is considered to be the founder of the surrealistic direction in cinematography (the movie The Phantom of Liberty). In 1977 the audience enjoyed her brilliant acting together with Adriano Celentano in the comedy with the speaking title The other half of the sky.

Monica already had in her filmography more than forty comedy movies, when Michelangelo Antonioni offered cooperation to the muse one more time, twenty years later. In 1981 their last collaboration under the title The Mystery of Oberwald was released. In this movie, Vitti performed the role of Archduchess Elisabeth Marie of Austria.

In 1989 the woman became a director and scriptwriter of the Secret movie Scandal, and moreover, she played the leading role in this picture. With this work, Vitti said goodbye to cinematography and returned to the theater where she began to teach and sometimes to appear on the television.

In 1995 Monica Vitti was noted for her merits in the European cinematography with Golden Lion Awards at Venice Film Festival.

Michelangelo Antonioni became the most important man in Monica Vitti's life. The love story of the director and his muse was interpreted by the journalists a dozen times. If on that memorable day the director hadn't started the conversation with the actress in the studio, their creative union wouldn't have existed.

At first, the director gave a compliment to the woman’s voice: Monica had a unique timbre - it was quite low and a bit bratty and also she had a slightly ironic manner of speaking. And then the director frankly told her looking in her eyes that he was looking for such a face for a long time. Monica burst out laughing, and Antonioni finally fell in love with her.

Michele, the way his relatives called the director, became a teacher, a friend, and a lover for the young woman. He helped her to love her appearance as she was embarrassed by her look. He shot her the way that it was just impossible not to fall in love with her. And she wanted to be desired and seductive for him. For the first time, she began to have high heels and backless dresses in her wardrobe.

Their passionate, beautiful novel lasted for nearly ten years. Everyday life on the movie set, joint travels to the festivals, flowers and champagne in the mornings, crowdy evenings in the high society – they had all these ingredients in their saturated personal life. They seemed to have tied relations, and one could think that they couldn't break up. However, the loveable temper of the artist and jealous character of the passionate Italian interfered with their destiny.

In the mid-sixties, Antonioni was no more in love with his muse. He invited the English actress Vanessa Redgrave to play a role in his new movie Blowup. Her cold and strict beauty enchanted the director.

Monica was suffering from her personal tragedy for a long time, but over time she recovered from the past romance. In 1975 she met the director and scriptwriter Roberto Russo who became her official husband in 20 years. The actress doesn’t have children.

The woman told about her memories of youth, love, cinematography in her autobiography book under the title "Sette sottane."

In old age, Monica Vitti retired. During a long time, nothing was known about the destiny of the famous actress.

Only in 2011 the family officially announced that the actress has Alzheimer's disease, what became the reason of her absence in public during 15 years. In 2018 her husband confirmed that at present Vitti lives in Rome and the appropriate care is provided to her. 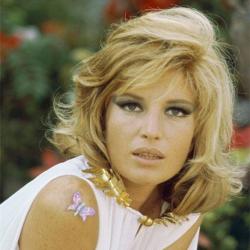