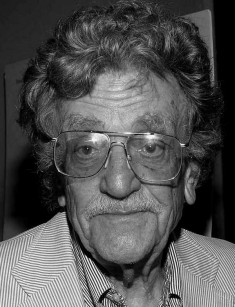 Kurt Vonnegut is an American writer, novelist, and essayist of the 20th century. Those who have not read his books are likely to be acquainted with his quotes. Cat's Cradle and Slaughterhouse-Five or The Children's Crusade are Vonnegut’s most famous works.

Kurt Vonnegut was born into the family of German migrants on November 11, 1922. Indianapolis became his hometown; the writer often pictured it in his works. The boy’s father was a co-founder of a construction company, and the mother was the daughter of a millionaire who manufactured beer. The Vonneguts had three children: Kurt, Bernard, and Alice.

When the Great Depression occurred, the family’s business deteriorated: the father was actually jobless. At the same time, Kurt’s mother had a mental disorder. No suitable treatment was found. In 1994, the woman committed suicide which painfully imprinted in Kurt’s memory.

As his father insisted, the young man finished Shortridge High School and entered at Cornell University to study chemistry. In 1939, his brother got a degree in chemistry at the Massachusetts Institute of Technology, and the parent was sure that Kurt would demonstrate the talent in the same direction.

The father believed that his son’s passion for history and philosophy was useless. However, Kurt had little interest in chemistry. At that time, he was attracted by literature. He made his first steps in this field and worked for a student newspaper.

The future writer did not graduate from the university. He spent three years there and achieved a lot as an editor and observer rather than a scientist. At the beginning of the Second World War, the young man joined the army. He transferred to the Carnegie Institute of Technology and, later, the University of Tennessee to study mechanical engineering.

When Vonnegut went to the front, he was captured by German soldiers soon. He was sent to a labor camp in Dresden and watched the war events there. The impressions from that period reflected themselves in the writer’s books. During night air raids, the captured were locked in an abandoned slaughterhouse where chops of meat used to be stored. Dresden was ruined. Kurt survived miraculously.

The man participated in sorting out the remnants. According to Vonnegut, no less than 250 thousand people suffered from bombing. Later, those memories were described in Slaughterhouse-Five or The Children's Crusade.

After Leipzig was liberated, the captives were sent to the Sudetenland. Thanks to the Soviet army, this territory was cleared in May 1945. Vonnegut was given a Purple Heart awarded to those who got injured during military activities. However, the writer did not treat it seriously: his injury was minor.

When Vonnegut came back home, he entered a postgraduate program at the University of Chicago. He got hired as a police reporter for the local news agency and combined his studies and work. In 1947, the writer presented his thesis on the fragile balance between good and evil in fairy tales. His work was criticized and rejected. In 1971, Vonnegut finally got his Master’s degree; the publication of Cat’s Cradle contributed to that.

Later on, Vonnegut moved to Schenectady. Thanks to his relative, he got hired at General Electric as a PR manager. He wrote news about the company discoveries until 1951.

The communication with scientist influenced the writer’s works. In the afternoon, he performed his duties; at night, he wrote short stories. He sent some of them to Collier’s Weekly. Following a chain of rejections, the magazine published two works eventually and paid the author $1700. As Vonnegut realized that literature could bring money, he decided to devote himself to his real mission.

Many facts from the man’s biography reflected in the writer’s books. The events of his youth were described in Player Piano published in 1952. Vonnegut described the future where machines could replace a human being in any sphere. The novels The Sirens of Titan (1959) and Cat’s Cradle (1963) pertain to the sci-fi genre.

In 1967, Kurt Vonnegut received a Guggenheim Fellowship that gave him the opportunity to visit Dresden and collect the materials for his new book. Slaughterhouse-Five or The Children's Crusade published in 1969 is the perfect example of the writer’s manner. In 1972, George Roy Hill directed the movie based on this work; it got a prize at the Cannes Film Festival.

In 1965-1967, the writer collaborated with the University of Iowa. Soon, the collection of short stories Welcome to the Monkey House was released.

Vonnegut tried himself as a playwright and presented a play Happy Birthday, Wanda June. It was staged at New York's Theatre de Lys. In 1971, Mark Robson created a movie based on this work.

In 1973, the novel Breakfast of Champions came out. At the same period, the writer became Professor of English prose at New York University and continued to develop his literature. In a while, the new novels were published: Slapstick, or Lonesome No More!, Deadeye Dick, Bluebeard, Hocus Pocus, and so on. According to critics, Kurt Vonnegut combined sci-fi elements with grotesque and parable which made his works unique.

In 1994, the author openly announced he had finished his career. However, in 1997, the new work, Timequake, was presented. Before 2000, the writer had several collections of essays released. In 2005, the book of biographical essays A Man Without a Country came out. It was the last work in the man’s literary career.

For the first time, Kurt married Jane Marie Cox. Two sons and a daughter were born in this marriage. Besides, the man made a significant decision and took custody over three nephews who remained orphans after Vonnegut’s sister and her husband passed away. In the second marriage with Jill Krementz, the writer adopted a girl. Thus, there were seven children in the large family.

The man’s personal life was not easy. His father died in 1957. The next year, his sister Alice died of cancer, and the woman’s husband who went to see her died in a car crash. Vonnegut felt he was responsible for many things, and this burden encouraged his negative thoughts. When he lost his nearest and dearest, his depression deteriorated. He often thought about committing suicide but did not want to be a bad example for the children.

In addition to his literary talent, Kurt was good at drawing and preferred graphic arts. He created drawings for Breakfast of Champions by a marker pen that supplemented the text.

The author often created illustrations for his own works and interpreted the image of the American culture. In 1993, Kurt Vonnegut collaborated with the graphic artist Joe Petro III who helped with book illustrations. There were several exhibitions presenting Vonnegut’s paintings in the United States.

The writer worked to the ripe old age and loved what he did. Kurt Vonnegut died on April 11, 2007, at the age of 84. He had a bad fall and got a head trauma which caused his death.

The writer’s works are popular all over the world. They are the classics of the 20th century, and his quotes have become aphorisms. In Indianapolis, the man’s compatriots paid their respects to his artistic achievements: 2007 was announced the year of Kurt Vonnegut. Today, the writer’s texts are studied in many schools. 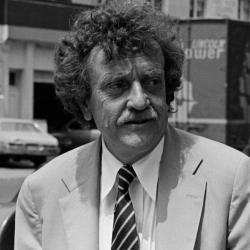