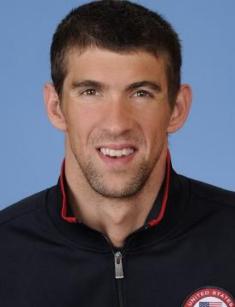 Michael Fred Phelps II also known as “The Baltimore Bullet” can boast 23 Olympic victories, 13 of which were individual. Today, the athlete holds the recording number of prizes, and nobody has surpassed him.

The would-be sportsman was born in June 1985 in Baltimore, Maryland. Michael was one of the three kids in the family of a school principal Deborah Davisson and a soccer player Michael Fred Phelps. When the boy turned nine, the parents divorced; it was painful for him. When Phelps went to the sixth grade, he was diagnosed with attention deficit hyperactivity disorder.

It was the elder sister who introduced seven-year-old Michael to sports and took him to a swimming pool. Three years later, the talented youth broke a national record in his age group. Soon, the experienced coach Bob Bowman began to work with Phelps.

Michael was steadily conquering the sports world under his mentor’s guidance. At 15, the young man was selected to participate in the 2000 Olympic Games in Sydney and became the youngest participant in the history of the competition. Although the athlete reached only the fifth place then, he broke a world record the next year. In 2001, Phelps was named the athlete of the year in the United States.

It was only the beginning. In 2003, 17-year-old Michael graduated from school and broke five world records. The fame came the next year when the sportsman participated in the Olympic Games in Athens: he won eight medals; six of them were gold. Only the Russian gymnast Alexander Dityatin had the same set of awards in 1980. As for the swimming, Phelps was the pioneer.

The same year, the young man followed his coach Bob Bowman and moved to Michigan; he entered the University of Michigan to study sports management.

The man was determined to achieve what had never been achieved before. He wanted to break his countryman Mark Spitz’s record: seven gold medals during the 1972 Olympic Games in Munich. Phelps was working hard and made his dream come true: in 2008, he gained eight gold medals in Beijing. Spitz’s “eternal” record was finally broken.

In 2009, the sportsman was accused of doping: the paparazzi took pictures where the swimmer was smoking marihuana. The man turned out to be clean, and cannabis smoking was not prohibited during non-competition periods. Still, the USA Swimming disqualified Phelps for three months for disappointing those who believed in him.

Michael’s career is full of triumphs: the American champion got 19 Olympic gold medals and broke 32 world records. The majority of athletes can only dream of such results.

In 2012, after the Olympic Games in London, 27-year-old Phelps decided to finish his sports career. By that moment, he had surpassed all athletes in all sports by the number of Olympic prizes: he had 22 medals and broke the record of the Soviet gymnast Larisa Latynina established 48 years ago.

However, the man participated in the Games in 2014 and 2016; once again, Phelps said Rio de Janeiro would be the last one. Fans were pleased to see his new achievements: Michael broke his own record in the number of gold medals and became the 23-time champion.

Overall, Phelps has 28 Olympic medals. 13 gold medals pertain to individual competitions: it is another record. It is interesting that nobody until Michael could compare to Leonidas of Rhodes, the track-and-field athlete from Ancient Greece: he had 12 gold medals individually in 152 BC. The record was not broken for 2168 years.

The athlete’s personal life has been as successful as his career: Michael is married to the model Nicole Johnson who was Miss California USA in 2010.

In May 2016, the couple’s first child, Boomer Robert, was born. Phelps shared his joy with fans and said he had never been happier before.

The sportsman believes he should spend as much time with his family as he can. Michael seems to follow that rule: there are many family pictures on his Instagram.

In addition to the athlete’s natural talent, his body construction contributes to his victories. Michael’s shoe size is 47, more than an average swimmer of his height. Besides, Phelps has disproportionally short legs, long body, and long arms; his arm span is about 6.6 feet (201-203 cm.) which is more than the man’s height: 6.33 feet (193 cm.).

Michael’s weight is 183 lbs. (83 kg.). It would not be that interesting if it had not been for the legend about “Phelps’s diet”: there were speculations that the sportsman consumed 10-12 000 calories. However, he claims he has never eaten that much.

The swimmer often appears in commercials; he is the spokesperson for LZR Racer. Moreover, Michael has his own brand producing swimming goggles; he created them with his coach Bob Bowman.

Michael Phelps has proved he has no rivals among humans. In 2017, he participated in a unique contest held by Discovery channel: a great white shark was his opponent at 100 m. This time, Phelps lost: the animal was two seconds faster.

On February 12, 2018, Michael’s second child, the son Beckett Richard, was born. The athlete announced the news on his Instagram.