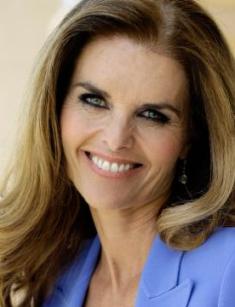 Maria Shriver is better known as the former wife of the famous actor and politician, Arnold Schwarzenegger, but she is also a renowned journalist and author. In 2017, Maria turned 62 years old, but she is still full of energy and pays a lot of attention to her career and social problems of society. Maria and the world-famous Terminator has four children.

Maria was born on November 6, 1955, in a famous family. Her mother Eunice came from the renowned Kennedy family and was the sister of the 35th president of the United States, John Fitzgerald Kennedy. Father Robert Sargent Shriver Jr. was a prominent politician. The family lived in Chicago, Illinois.

The girl attended Westland Middle School. After graduation from school, Maria enrolled in a private university in Washington, D.C. In 1977, Shriver received a Bachelor of Arts degree in American studies.

After completing her studies, Maria took up journalism. She moved to Philadelphia, one of the largest cities in the country, and began working as a producer and news editor on a local television channel. Then the persistent journalist began to climb the career ladder. In 1985, she was invited to anchor The CBS Morning News.

Two years later, her career took off when she began to work on the NBC News channel. Her career developed until 2004. Then the channel cited concerns the network had over the conflict of interest between her role as a journalist and her status as the First Lady of California. So, she could no longer give an objective account of political events, since she had an increasing role as an advocate of her husband's administration.

However, Maria did not sit at home. She began developing public projects as an employee of the governor's office. In 2004, Shriver organized a forum for women, which attracted thousands of participants from all over the country every year. One year later, she created a program to help working families in need. Maria also began to pay much attention to volunteerism.

In 2009, Shriver produced The Alzheimer's Project, a four-part documentary series, for which she won an honorary Emmy Award. Maria’s credentials also include the Peabody awards for her television journalism.

Maria has always attracted the attention of men. The pretty brunette whose height is 5.44 ft. (166 cm) comes from a famous family and has received an excellent education. The girl devoted more time to learning and self-development than to relations with the men until the fateful meeting.

21-year-old Maria, a university graduate, helped her mother arrange a charity tennis tournament at their residence. The handsome Austrian bodybuilder and actor, Arnold Schwarzenegger, attended the event. The young people immediately noticed each other, but their relationship developed slowly. Maria and Arnold celebrated the wedding only nine years later, in April 1986.

The wife thought that their marriage was quite happy. Three years after the wedding, the couple had their first daughter, Katherine, and a few years later, the second girl, Christina. Two years later, in 1993, Maria and Arnie had the first boy and the third child, Patrick. The couple raised daughters and a son when they decided to have an equal number of girls and boys. So, in 1997, she gave birth to the second son, Christopher.

Maria continued to work and raise children, while her husband starred in Hollywood blockbusters. He had already played in The Terminator, Commando, Predator, Red Heat, and other films. Americans considered Maria and Arnold to be the perfect couple. She is the heiress of the famous politicians, a high society lady, and he is a successful actor, athlete, politician, and handsome man. Four children also proved that their family was strong.

In May 2011, the unpleasant news upset the couple’s fans. After 25 years of marriage, they decided to separate. The official reason for it was irreconcilable differences, but these words hid many betrayals of the husband. It turned out that Arnold did not just have short love affairs, but lived a double life.

For many years, he cheated on Maria with their housekeeper Mildred. The result of their relationship was the birth of Joseph, the illegitimate son, who appeared in September 1997, the same month when his official wife, Maria, gave birth to their fourth child. Apparently, the Christmas holidays in the winter of 1996-1997 were very “fruitful” for Arnold.

Shriver later stated that the news shocked her, but as a real representative of the Kennedy family, Maria did not make family problems and her feelings public.

The divorce was hard, and the court proceedings lasted for a long time. She hired the best lawyers who dig deep into Arnold’s financial activities for the whole marriage and the existence of other illegitimate children. It turned out that Schwarzenegger was lavish toward the second family, having bought the housekeeper and their son a cottage for $ 325,000. The couple’s children were anxious about the separation of the parents since they could not maintain friendly relations.

After the breakup with both beloved women, The Terminator quickly started a new love affair with physical therapist Heather Milligan. But his wife Maria recovered from a painful breakup for a long time and did not even think about her personal life, taking care of the children and working.

Only in 2014, the media spread rumors that Maria had improved her personal life. Her boyfriend was political consultant Matthew Dowd. The couple does not tell about their relationships, but their friends say they have been living together for a long time.

Maria has become more loyal to her former husband. Nowadays, she and Arnold attend the school leaving parties of their children and other family activities.

Maria Shriver has a net worth of $100 million.