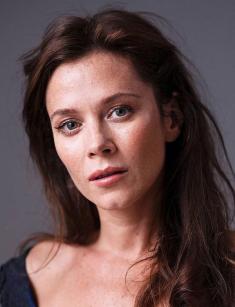 The full list of the actors nominated for BAFTA Television Awards appeared at the beginning of April 2018. Anna Friel and her three rivals were candidates for the prize for Best Supporting Actress; the woman could have received it for the role of Christina Fitzsimmons in the series Broken. However, she did not gain it.

Anna Louise Friel was born on July 12, 1976, in Rochdale, not far from Manchester. Her parents, Julie and Desmond, were teachers.

The mother worked with children with special needs; the father used to be a French teacher and folk musician and then became a web-design company owner. Anna’s brother, Michael, also tried various jobs: he appeared in the TV commercial of Hovis (the company producing bread and flour) and later became a doctor.

“My parents said I could only do it if I got my education, and so I had something to fall back on”, the actress remembered in one of her interviews.

The girl followed the adults’ wise recommendations and went to Crompton House Church of England School, and later Holy Cross College. The child felt attracted to acting early: no talent show ran without Friel. Later on, Anna continued to make her dream come true and studied drama in the theater studio in neighboring Oldham.

The parents support their daughter today. In 2016, Des protected Anna when her neighbor filed a complaint related to рук chimney-pot; the accusations of the violation of house planning rules followed. The Irish man sent an e-mail to the charger and explained to him why it was a wrong action.

Talking about her role in the movie Me Without You about “too close” friends, Holly and Marina, the actress confessed it was not much difficult for her: she had the same kind of friendship with some Claire until she turned 16.

Anna debuted early, when she was a teenager. In 1991, she participated in two series: GHB and the Guinness record holder Coronation Street.

The artist earned her fame after the series Brookside where she appeared in the first lesbian kiss scene on the British television; the public outcry and many arguments followed. In 1995, Anna won two prizes thanks to the role of Beth Jordache.

The full-length movie debut was less successful: the actress worked on the little-known movie The Stringer with Sergei Bodrov Jr. and Vladimir Ilyin. The director Paweł Pawlikowski bitterly admitted the project failed:

“The female character was totally underdeveloped, so no English star would want to do it. Apart from Anna Friel, and she was sort of bankable, but she had a very limited range. There was a complete idiocy at the heart of the whole thing. Thank God it wasn't distributed”.

According to Friel, the 19-year-old actress had to spend eight weeks in Moscow stalinka apartments where mafia-looking men were calling her and offering to have sex.

The actress’s filmography is pretty extensive; there are many series there. Pushing Daisies gave the woman the chance to collaborate with Lee Pace. The Street that brought another award, Steven Spielberg’s provocative The Girlfriend Experience with Louisa Krause, and Broken are also notable. Anna appeared in London Boulevard (the remake of the iconic The Bodyguard), the thriller Limitless, brutal Bathory, I.T. starring Pierce Brosnan, and so on.

Friel has also tried herself in music and theater. She took part in the Broadway play Closer, Breakfast at Tiffany's, and Uncle Vanya and appeared in the music video by Manic Street Preachers (The Manics), as well as commercials for Reebok and Pantene. In addition, Friel supports organizations involved in protecting wild nature.

Speaking about her profession, the actress is pretty laconic:

“You can see when an actor gets bored: Their eyes go dead. I promised myself I'd never let that happen. If it does, I'll go and live on a desert island for a year”.

In the mid-December of 2010, the media were blown by the sad news: the beautiful and seemingly stable couple, Anna Friel and David Thewlis (the werewolf in Harry Potter and the Prisoner of Azkaban) broke up.

The actors met in Cannes in 2001. Four years later, on July 9, their daughter, Gracie Ellen Mary, was born. Doctors predicted the woman would have problems with conception due to her diseases, but everything worked out well. The girl was named after her grandmothers and the English actress and singer Gracie Fields.

Anna shared some thoughts about motherhood:

“Being a mother gives you an incredible feeling of empowerment, you think if I can go through such pain and that level of sleep and still operate and not be grumpy, you can do anything”.

Despite the mutual support, Anna and David split up. Some journalists believed that the woman’s fondness of her young colleague Joseph Cross caused that. Later on, Friel dated Rhys Ifans, the ex-boyfriend of Sienna Miller and Kimberly Stewart.

The series Butterfly was premiered on October 14, 2018; Anna personified the mother of a transgender child. She also appeared in the short movie The Sea.

The celebrity continues to work on the crime detective series Marcella. Deep Water and Sulphur and White are Anna’s recent projects.

Friel posts pictures of her family, friends, daughter, niece, and herself on her Instagram. There are professional photos including those in a swimsuit; the woman looks slim and sexy. Besides, the actress has a Twitter account.