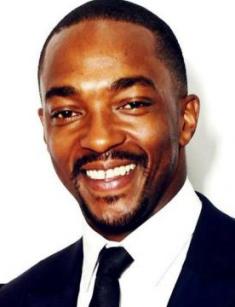 The American actor Anthony Mackie has been nominated for the ISA in several categories. The majority of viewers remember him for the movies based on the Marvel comics, the Infinity saga, where he played Falcon.

The would-be actor was born in New Orleans, Louisiana, at the end of September. The boy’s family belonged to the middle class. The mother kept the house and brought up Anthony and his brother Calvin; the father was involved in the roofing business. Young Mackie went to the New Orleans Center for Creative Arts. The parents and teachers noticed his talent early and encouraged him to develop it.

Anthony’s mother died early, and the father had to take care of his sons alone until he married again; the stepmother did her best for the boys.

After graduation, Mackie moved to Winston-Salem and enrolled at the North Carolina School of the Arts to study drama. Further on, the young man polished his skills at the Juilliard School's Drama Division. Anthony’s brother chose a different path: a teacher in training, he got hired at Tulane University as a Professor’s assistant.

2005 brought a tragedy. The actor’s father and stepmother who still lived in New Orleans died during Hurricane Katrina.

Mackie debuted on the stage when he was a Juilliard School student and performed on Broadway; the role of the rapper Tupac Shakur was the most memorable one. Later, in 2009, the actor came back to the same figure in the biopic Notorious. When the artist got recognition in cinematography, he never left the theater and combined several projects at once.

Anthony’s full-length movie debut happened in 2002 when he participated in Curtis Hanson’s 8 Mile. Eminem played the main character; Mackie personified Papa Doc. The project was financially successful, and ordinary viewers loved it. Thus, it was a good start for the actor.

2003 brought the second Hollywood work: Harrison Ford’s action Hollywood Homicide. Law & Order: Criminal Intent, The Manchurian Candidate, and She Hate Me followed. In 2004, Anthony had the first significant part in the low-budget drama Brother to Brother. It is the story about a gay student who works part-time in a shelter for the homeless. The movie did not gross much.

In 2011, Mackie personified Tom Piper in the comedy What's Your Number? The same year, he played Finn in Shawn Levy’s Real Steel. This fantastic action was based on Richard Matheson’s short story “Steel”. Hugh Jackman got the lead part; Shawn Levy, Susan Montford, and Don Murphy worked as producers of the project.

In 2013, Anthony was given the role of Coleman Harris in the crime thriller Gangster Squad.

In 2014, Mackie joined the Marvel cinematic universe and appeared in the second movie about Captain America. The blockbuster Captain America: Civil War by Anthony and Joseph Russo was even more popular than the previous one. As the story runs, Steve Rogers (Chris Evans) gets more supporters, including Falcon. Mackie looked natural in this role. His character also appeared in other movies of the franchise: Avengers: Age of Ultron (2015), Ant-Man (2015), Avengers: Infinity War (2018), Avengers: Endgame (2019). Sebastian Stan, Tom Holland, Mark Ruffalo, Robert Downey Jr., and other celebrities personified the main characters.

Few celebrities can boast a happy marriage; Anthony Mackie is one of these lucky people. Unlike the majority of his colleagues, he had no numerous affairs with actresses and models. The man had been dating his childhood friend, Sheletta Chapital, for a long time. Anthony proposed to her in 2014; the marriage took place in December. Three kids have been born in this union.

Apart from acting, Mackie is a businessman who owns the bar NoBar.

Anthony has no Instagram, but fans can follow him on other social networks. He regularly posts on Twitter and announces movie premiers and other significant events, as well as shares some personal pictures.

Today, the actor is actively involved in new projects. In January 2019, Jonathan Helpert’s sci-fi movie IO was presented; Anthony played one of the lead characters, Micah. In Avengers: Endgame, the artist came back to the role of Sam Wilson. Mackie will also appear in the upcoming drama The Woman in the Window.

Anthony does not ignore series, and fans have many chances to see his work there. In 2019, the artist will appear in the British dystopian series Black Mirror. 2020 will bring the sci-fi project Altered Carbon; its filming began in February 2019.

Anthony Mackie’s net worth is estimated at $4 million in 2019.