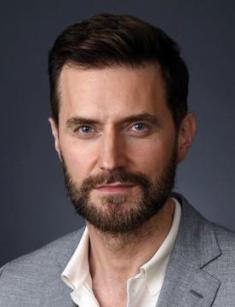 Richard Armitage is an English screen and stage actor who has won two Saturn Awards. He was nominated for the Laurence Olivier Award for his excellence in professional theatre, and also received the Broadway World: UK Awards. The actor gained popularity after the role of dwarf leader Thorin Oakenshield in Peter Jackson's film trilogy adaptation of The Hobbit.

Richard Crispin Armitage was born on August 22, 1971, in England, in the small village of Huncote near Leicester. His father, John Armitage, was a nuclear engineer, and his mother, Margaret Armitage, was a school secretary. He was the second child in the family, Richard has an elder brother, Christopher.

Since childhood, he was interested in music and acting. He first appeared on the stage as an elf in the play The Hobbit, after which he became convinced that he wanted to connect his life with creativity. He entered Brockington College, where he learned singing and playing musical instruments. Richard can play the guitar, flute, and cello.

At the age of 14, he became a student at Pattison College, where he studied the basics of acting. Upon graduation, the future actor made an important decision. He joined the circus and went to Hungary.

For six weeks he toured with artists but worked mainly as a spare hand. He cleaned the cages and assisted the main circus actors on the arena. However, his main goal was to obtain an Equity Card that would give him the right to audition.

Returning to the UK, he finally got it. It was followed by a series of roles in various musicals, including the famous one, Cats. But soon Richard Armitage realized that musicals were not his dream. He wanted to be more truthful on the stage since everything looked too theatrical and pretentious in musical productions.

Therefore, he entered the London Academy of Music and Dramatic Art. After graduation, the young actor began working at the Royal Shakespeare Company. He played in the productions of The Duchess of Malfi, Macbeth, and Hamlet. But Richard did not get leading roles at the theater. Although he always wanted to be a stage actor, he began to work more and more often on television.

While studying at the academy, Armitage got a role in the film Star Wars: Episode I – The Phantom Menace. However, all scenes with his participation were cut while editing. But since then, the actor has regularly played bit parts in various English TV shows.

His first prominent work on television is the supporting role in the mini-series Sparkhouse, a modern take on Wuthering Heights. He played faithful, patient, and hardworking John Standring.

But after this role, he portrayed a series of negative characters. The actor later said that he liked to play bad guys, because he could be aggressive, immoral, and get people into trouble, which he could not do in real life.

In 2004, Richard Armitage landed the role of John Thornton in the BBC series North & South, based on the novel by Elizabeth Gaskell. His great popularity with viewers surprised the creators of the series. They did not promote the project a lot, but viewers appreciated Mr. Thornton. In the first days, the BBC website had so many users that the resource could not stand it and crashed.

In 2006, he portrayed the main antagonist of Robin Hood in the TV series of the same name. The image of the knight-villain Guy of Gisborne became the second prominent work of the actor after John Thornton.

In 2008, he appeared in the spy TV series Spooks, in which he played a senior officer, Lucas North. He lost 22.04 lbs. (10 kg) for the role, and the make-up artists made a fake tattoo for about 2 hours when the actor was to appear with a naked torso.

Richard got his first role in Hollywood in 2010. He played the Nazi spy, Heinz Kruger, in the movie Captain America: The First Avenger. At that time, director Peter Jackson noticed him. He invited Armitage to play dwarf Thorin Oakenshield in his trilogy about the Hobbit. This film story was highly appreciated by both viewers and film critics.

In 2015, the actor joined the cast of the American television thriller Hannibal, which aired on NBC. He got the role of Francis Dolarhyde, a serial killer. In 2016, Richard Armitage played King Oleron in the film Alice Through the Looking Glass. The same year, the series Berlin Station was released, in which the actor got the leading role.

Armitage has never forgotten about the theater and always wanted to return to the stage. He succeeded in 2014 when the man played John Proctor in the play The Crucible. The staging created a sensation. The play was staged for 17 weeks, day after day, and twice a day on weekends. The same year, the actor was awarded the Broadway World: UK Awards for Best Leading Actor in a New Production of a Play, and in 2015 he was nominated for the Laurence Olivier Award.

As for his private life, Armitage tries to hide and not to make it public. But the fans of the handsome (his height is 6.2 ft. (189 cm)), blue-eyed brunette do not cease to find out the details of his love affairs. It is known that for several years he dated actress Annabel Capper. But she did not become his wife.

But after filming in The Hobbit, rumors about his non-standard sexual orientation began to spread. They claimed that he had an affair with his colleague in the film, Lee Pace, who played Thranduil. It is noteworthy that the actors did not refute these speculations.

Armitage prefers not to post their photos on Instagram. However, it is not necessary because there are a lot of their pictures on the Internet. The paparazzi have taken photographs of the men at the film premiere and walking together along the street. But, of course, it can be just a friendship.

The meticulous fans continued their "investigation" and began to notice that the men regularly wore each other's clothes. Pace appeared in Armitage’s leather jacket, then Richard wore Lee’s old sweater on the set.

None of them has come out, although OUT, an American LGBT fashion magazine, ranked Lee Pace one of the 100 most eligible gay bachelors. Until now, Richard Armitage has not made any official statements about his relationship and orientation.

The actor continues to play in films. In February 2018, he participated in the movie My Zoe, directed by Julie Delpy. He said in an interview that he could not help but be interested in such a scrip. It is the tragic story of a divorced couple who is caring for their little daughter. However, the exact date of the premiere has not been announced yet.

In 2018, the film Ocean's 8, a spin-off from the trilogy about Danny Ocean's friends, was also released. The cast of the movie is truly brilliant, starring Sandra Bullock, Anne Hathaway, Cate Blanchett, Rihanna, Helena Bonham Carter, Matt Damon, and many others.

Richard Armitage has an estimated net worth of $13 million.