Santa Claus is the character who stepped from the world of fairy tales into reality. Children and teenagers believe in him, and even adults seek for his assistance. People explain some unusual things that happen in the holiday season by his existence. The white-bearded old man in the traditional red costume takes care of children and prepares presents for them for a whole year: kids are looking forward to seeing his gifts under a Christmas tree as eagerly as birthday presents. The relationships with this character are based on the belief in him – and in miracles.

One can hardly believe that Santa Claus was a real person. However, he actually lived long ago; his homeland was called Lycian Myra (modern Turkey), not Lapland. The first references to this man are dated back to 253 AD; it is Saint Nicholas who worked as a bishop. He was known as a kind person, and everyone respected him for his belief. Nicholas had some savings and shared them with those in need; he helped people as much as he could. Seamen, merchants, and bakers considered him to be their guard; children also loved the warm-hearted Nicholas.

In the tenth century, the tradition was set: on December 6, gifts were given to everyone at Cologne Cathedral. Soon, other cities borrowed the tradition, and the name of Saint Nicholas was spread.

In the 19th century, the American writer Clement Moore created the poem “A Visit from St. Nicholas“ also known as “Night Before Christmas.” This work described how the old man was visiting houses to distribute presents among children who had been behaving well for the whole year. Thus, the name of the character, Santa Claus, was connected to the generous gift-giver.

By 1840, everyone in the New World was familiar with Santa Claus. In 1863, the artist Thomas Nast used the image of the old man in political caricatures. Later, he also showed the magician’s life in his pictures. From that time, it has been a common knowledge that Santa Claus lives in the North Pole, and there are many elves in his residence who help him create presents for kids.

The legend says that Santa has his own house. He makes notes about all children’s behavior in a special book and identifies who was obedient and who was a trickster. It is interesting that the character was portrayed as an elf at first; in the course of time, he got more human-looking and reminded of modern Santa.

To pamper children with long-awaited gifts, Santa prepares for Christmas for a whole year. On the eve of the holiday, he gets on his deer-drawn sleigh and flies to different countries to deliver presents. The old man goes down a chimney, leaves toys, and treats himself to cookies. As he finishes his work, Santa goes away and gives his elves new tasks.

Santa wears red pants, a jacket with a belt, a hat, and long boots. There are some pictures that portray Santa as a pipe smoker. Those who surround the old man are pretty weird, and his life remains mysterious.

Unlike Russian Ded Moroz who has a granddaughter, Snegurochka, Santa Claus is single, although there is a theory that Mrs. Claus exists. The old man usually takes care of himself; he likes milk and cookies which are traditionally left for him under a Christmas tree. Besides, Santa is on friendly terms with elves and deer.

The magic sleigh is pulled by deer: Dasher, Dancer, Prancer, Vixen, Comet, Cupid, Dunder, Blitzen, and Rudolf. The latter deer joined the company by accident when it was snowing hard. Rudolf stands out among other deer for his glowing red nose.

As for the man who became Santa Claus’s prototype, his biography contains more facts and details. Nicholas was born in Patara, Lycia in 255-257 AD. The boy’s parents died and left their son their property. Nicholas lived with his uncle, a priest, and helped people in need. There was a poor man whose daughters could not marry because they had no dowry, so that the women could be sold into slavery. The night before the deal, the elder daughter hung stockings to dry; in the morning, she found gold in them. Thus, Nicholas helped those women to escape slavery. He always acted in secret.

In a while, Nicholas was chosen as a bishop. His life was the example of belief, generosity, and open-heartedness. After Nicholas’s death, the tradition to give presents and leave something valuable in stockings remained; it has survived until the present days.

The image of Santa Claus is diverse in different counties. His name is also different: Russian Belorussian Ded Moroz, Austrian Silvester, Greek Saint Basil, German Weihnachtsmann, Columbian Papa Pasquale, French Père Noël, Holland Sinterklaas. The magician hides presents in different ways: Swedish children find them by an oven, and Germans – on a window ledge. In Mexico, he leaves gifts in boots, and Spanish children can find them on a balcony. Some peoples consider Santa Claus a pagan deity; others see him as a magician and even a forest creature.

In Europe, people think that Santa lives in Lapland; many families visit his residence before Christmas and New Year. The old man has other residences in the USA: Torrington, Connecticut, and Wilmington, New York.

The Americans turned Santa Claus into the icon of millions. Thanks to the famous Coca-Cola commercials, the image of the perky old man settled in people’s minds. There is no wonder that American cartoon characters often talk about the details of Santa’s biography.

“Aren't we forgetting the true meaning of Christmas? You know... the birth of Santa,” Homer Simpson said.

In the animated movie Arthur Christmas, the position of the magician is inherited. The main character is proud to say:

“Many years ago, my father told me that being Santa is the best job in the world. He was right. I’ve loved it.”

The image of the old man, a bit on the heavy side, who brings presents, is cultivated in the United States and other countries. Thanks to that, children can believe in magic and miracles. Every Christmas movie or cartoon have philosophical quotes about it.

Santa is a popular character in animated series and movies. In comedies, parents in large families, notorious gangsters, those who do not believe in the power of Christmas, and those who lack love and warmth often become Santas.

Many movie makers may personify Santa Claus as an ordinary family man, like in the 1994 movie The Santa Clause. Sometimes, it is a character who has to play Santa (Bad Santa, 2003). In 2007, the movie Fred Claus gave a theory what the old man’s family could be like. Thanks to movie directors, the traditional character manages to catch up with the modern times and remains the favorite character regardless of a movie plot. 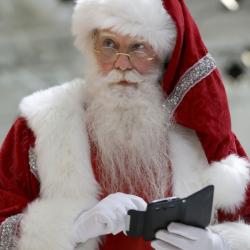