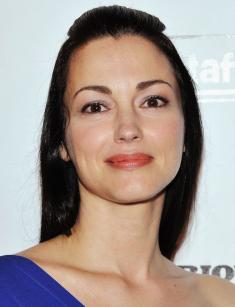 French actress Julie Dreyfus first came into prominence in Japan, where she went to study the language and became a TV star. Then she moved to Hollywood and gained world recognition for her roles in Quentin Tarantino’s films: the martial arts movie Kill Bill Volume 1 and the war drama Inglourious Basterds. Japan has become the actress’s adopted country, and people call her there a gaijin tarento (foreign talent).

Julie Dreyfus was born on January 24, 1966, in Paris. The girl's mother is the famous French actress, Pascale Audret, whose career developed in the 50-60s. Her father, Francis Dreyfus, was a music producer, founder of the recording company, Dreyfus Records, which made Jean-Michel Jarre well-known.

The girl inherited her sparkling beauty from the mother. Fans try to guess her nationality, discussing the attractive and unusual appearance of the actress. It has transpired that Dreyfus has French, Jewish, Alsatian and Romanian ancestry. The actress is also proud of her famous relatives and ancestors.

Julie’s maternal uncle is the legendary singer and songwriter, Hugues Aufray, known for his French-language covers of Bob Dylan's songs. The paternal ancestor is Alfred Dreyfus, a French army captain, accused of selling military secrets to Germany in 1894, but subsequently declared not guilty and rehabilitated. The Dreyfus affair had an extraordinary resonance in the French society of the XIX century.

The girl was seven years old when her parents divorced. Julie lived with her mother in France and spent her summer holidays in the UK. As a teenager, she was fascinated by Japanese culture and architecture, Asian interior design. In 1985, she started learning Japanese at the Institute for Oriental Languages and Civilization at the University of Paris.

Then she went to Japan to study at the Osaka University of Foreign Studies for a six-month, intensive Japanese course. Julie planned to improve the language and find a job as an interior designer. But fate prepared another lot.

At first, everything went as planned. After finishing the courses, Dreyfus moved to Tokyo working part-time in a design studio while continuing her private Japanese lessons. She soon succeeded in her studies, and in 1988 Julie Dreyfus was invited to work as a French-language instructor on television.

The attractive brunette was noticed on TV, and one of the series producers offered the beautiful girl to appear in one of the episodes to increase ratings. It worked, and soon directors began to invite Julie to various television and film projects, giving small roles. Julies’s early TV series Discovery of the World's Mysteries (Sekai fushigi hakken), Ryu's Bar, and Sense and Nonsense discovered her dramatic talent and showed it to a wide audience. The projects Don't Steal My Heart and Interactive Suspense were quick to follow.

In 1992, Julie got a role in the full-length film Tōki Rakujitsu, and two years later starred in the famous biographical drama Rampo directed by Rintaro Mayuzumi. The same year, she made her English language debut in the family comedy A Feast at Midnight. Soon, Dreyfus who knew Japanese, French and English set her sights on international projects in hopes of expanding her talents beyond Japan.

The first work which gained her international recognition was the role in the TV series The Crow: Stairway to Heaven (1998) with Mark Dacascos in the leading role. Later, Dreyfus appeared in the historical drama Bathory showing the atrocities of Erzsébet Bathory, a Hungarian countess, who killed hundreds of young girls. Julie portrayed one of the title characters, Lady Katarina.

The actress appeared in projects in different cities and countries. Besides Japan, Julie often worked in the United States. In 2001, she starred in the ABC pilot version of Mulholland Drive directed by David Lynch. Subsequently, the cult film of the American film director was based on this episode. It won some prestigious international movie awards. Dreyfus also filmed in Europe. In 2002, she played in the historic French film Jean Moulin, dedicated to the life story of one of the leaders of the Resistance movement.

At the same time, Julie met Quentin Tarantino at the Japanese Film Festival. The cult director was already impressed by her beauty when he saw Dreyfus’s photo on billboards all over Tokyo. The acquaintance resulted in cooperation on the set of the film Kill Bill Volume 1, in which Julie played Sofie Fatale, a loyal assistant of the Japanese crime boss, O-Ren Ishii (Lucy Liu).

“When they were filming a battle scene between Beatrix and O-Ren’s warriors in a Japanese cafe, everything was covered with the bloody bodies. It was very surreal,” the actress later recalled.

After the resounding success of Kill Bill Volume 1, the actress did not become famous overnight, as might have been expected. Next time, she appeared on the big screen only in 2008. Julie played in the grotesque comedy Tokyo!, which was presented in the Special Screenings section of the Cannes Film Festival. She also made her horror movie debut in the film Vinyan.

In 2009, Dreyfus’s filmography included one more Tarantino’s film Inglourious Basterds. Moreover, the Oscar-winning director wrote the role in this war drama specifically for Dreyfus. She appeared as Francesca Mondino, translator and lover of the Reich Minister of Nazi Germany, Joseph Goebbels. The film was nominated for a number of prestigious awards (including the Academy Award) receiving the Cannes Film Festival's Best Actor Award (Christoph Waltz).

In 2010, the actress began acting in the French TV series Interpol.

It is not easy to believe that the actress is alone seeing her bright appearance and slim figure (she is 5.57 ft. (170 cm) tall). However, Julie Dreyfus has often stated that the main thing in her life is work.

When she was young, the star did not tell the details of her personal life and did not compromise herself showing nude pics (including in bikini). Reporters write that the actress is not married and has no children. The tabloids have covered her romantic relationship with Quentin Tarantino, but there is no way to obtain a confirmation.

Now the actress rarely appears on the big screen and still highly values her privacy, as evidenced by her absence from social media.

Fans of the outstanding celebrity hope that in 2019 Dreyfus will get a new starring role.

Julie Dreyfus has an estimated net worth of $8 million.