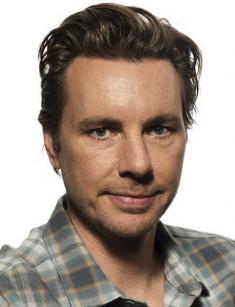 Dax Shepard has become famous for his roles in comedy films. Viewers could appreciate his talent in such movies as Without a Paddle (2004), Let's Go to Prison (2006), Employee of the Month (2006). He won the hearts of big fans of TV series, starring in the projects My Name Is Earl (2005) and Parenthood (2010). In addition to acting, Dax Shepard is a writer and director.

Dax Randall Shepard was born on January 2, 1975, in Milford, Michigan. He was named after one of the heroes of Harold Robbins’s novel "The Adventurers." His father Dave Robert Shepard, Sr. was a car salesman, his mother Laura Shepard worked at General Motors (GM) and was of French, Canadian and Belgian descent. Dax has a sibling, David.

Shepard lived in an average family. Dax was three years old when his parents divorced. It was difficult for Laura to bring up two children. She worked as a cleaner, organized dinners, and was a PR manager in an advertising agency. When the younger son went to school, the woman started up a small business. She worked car shows with traveling events at race tracks.

At the age of 14, Dax began working with his mother and helped her until he was 18 years old. During this time, the woman established a substantial business, creating four agencies that managed publicity events. Dax's mother has been married four times, and three stepfathers raised the boy. Thus, the man has also a younger half-sister, Carly Hatter.

Shepard enrolled at Walled Lake High School. He was the heart and soul of the class, made pupils laugh and spin a yarn. After graduating from school in 1993, Dax attended Sa Santa Monica College and West Los Angeles College. Later, Shepard entered the University of California in Los Angeles, where he graduated with honors with a B.A. in Anthropology. During his studies he played in the troupe, The Groundlings, improving his acting skills.

Having forgotten about his certificate, Dax began to attend the casting agencies in Los Angeles. However, the guy was not lucky, and soon he had to look for a job not to die of hunger.

“I’ve had a lot of bad jobs, but the only thing I’ve always wanted to devote myself to was acting. It is my life,” Dax says.

In 2003, Shepard finally had a good deal of luck. He was invited to the improved Candid Camera-type show, Punk'd, with Ashton Kutcher. Almost immediately, the young man made his feature film debut in Shawn Levy's family comedy Cheaper by the Dozen, featuring Steve Martin, Ashton Kutcher, and others.

In 2004, the actor could experience the delights of popularity and the first income. He became famous for a role in the sparkling comedy Without a Paddle. Dax played Tom Marshall, one of three childhood friends, going on a trip to search $200 thousand, the loot of long-lost legendary hijacker Dan Cooper.

The following year, Shepard appeared in the fantasy genre, starring in the film Zathura: A Space Adventure. The actor’s hero is an Astronaut from the space game who mentors the title characters, teenagers Walter and Danny, on survival.

Shepard’s new role was a resounding success. At that time, he starred in the film Employee of the Month (2006). In this romantic comedy, the young man played Vince, a Super Club's head cashier, who competed with a colleague (Dane Cook) for a new girl, beautiful Amy (Jessica Simpson).

Although critics gave negative reviews and nominated it for the Golden Raspberry Award, Dax became recognizable and famous overnight. However, at the same time, people began to confuse the actor with his colleague Zach Braff. They even posted memes with the pictures of both actors on the Internet.

Soon the young man was offered the leading role in the new black comedy Let's Go to Prison directed by Bob Odenkirk. Dax’s hero is a petty crook, John Lyshitski, who wants to take revenge on the judge who passed the harsh sentence. But the latter suddenly dies, and John’s revenge falls on his son, Nelson Biederman IV (Will Arnett).

In subsequent years, the actor appeared in such films as Baby Mama (2008) with Sigourney Weaver, the dystopian Idiocracy (2006) with Luke Wilson in the lead role, the comedy film Smother (2008) with Diane Keaton and Liv Tyler.

In 2009, Shepard tried his hand at screenwriting, working on the comedy Get 'Em Wet. He also played the leading role and invited Will Arnett, with whom he became friends during the shooting of Let's Go to Prison.

2010 was also eventful. Dax Shepard made his directorial debut, shooting his first film Brother's Justice, which won the Austin Film Festival Audience Award. Besides, he played a minor role in the romantic comedy When in Rome which also starred his bride Kristen Bell.

The same year, Shepard began shooting in the long-running TV series Parenthood. This project tells of three generations of the Braverman clan: Zeek, Camille, and their four adult children. Dax played Crosby, the second son of the Braverman family, for all five seasons. For this role, the actor was nominated for the People's Choice Award for Favorite Dramatic TV Actor.

Two years later, the comedy Hit and Run (2012) was released, for which Shepard also wrote the script. Moreover, he played there a leading role alongside Kristen Bell and Bradley Cooper. Dax's hero is a bank robber who hides in a town being enrolled in a witness protection program. But, his girlfriend persuades him to violate the law and go to Los Angeles, where the former accomplices are already waiting for him.

In 2014, fans saw their idol in the legal drama The Judge with Robert Downey Jr. in the title role. Shepard played a young lawyer, C.P. Kennedy, whose inexperience led to the fact that a person was wrongfully convicted. The victim's son, Hank Palmer (Robert Downey Jr.), is going to restore justice. Shepard’s latest projects are CHiPs and El Camino Christmas, released in 2017.

Dax Shepard does not belong to the famous Hollywood heartbreakers, and his modest life proves it. It is only known that the actor dated Briegh Morrison from 2003 to 2006 and had a love affair with Kate Hudson. Dax dated her in 2007, and they even appeared together in the short film Cutlass, for which she wrote a script.

Their relationships were short-lived, and soon the tabloids wrote about the young people’s breakup. Dax found consolation on the new relationships with a short actress (her height is 5.08 ft. (155 cm)), Kristen Bell. The actor understood that the woman was his destiny, and in 2010 the couple became engaged.

The man has a tattoo in the shape of a bell on his ring finger in honor of this event. On March 28, 2013, his wife gave birth to a daughter, Lincoln Bell Shepard. In December 2014, their second daughter, Delta Bell Shepard, was born.

There were tragedies in Dax’s life which were difficult to talk about. But the actor showed courage and said that he had been sexually abused as a child. It resulted in alcohol and hard drugs addiction. But when Shepard met Kristen, he had already overcome these problems.

“Kristen is a good girl. My past life terrifies her. She almost did not believe that I would marry her and put up with monogamy, kids and other such things,” the actor said.

Nowadays, Dax often helps children at the center for troubled teens because he also had a difficult past. People can listen to his audio podcasts, devoted to problems in human life and self-development. He is interested in motorsport and auto racing in his spare time.

In 2019, Shepard's filmography will include exciting projects. The actor is going to shoot in the TV series Bless This Mess and the movie The Buddy Games.

Dax is also participating in the film Scooby, in which he will work as a scriptwriter and co-director.

Dax Shepard has a net worth of $12 million.