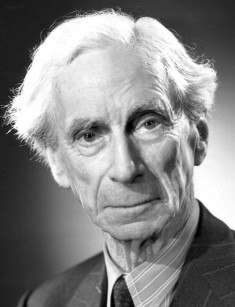 Bertrand Russell is a famous British philosopher, politician, author of prose works. He praised pacifism, supported atheism and promoted liberal views. The scientist created works on mathematical logic, philosophy, and theory of knowledge. Researchers consider Bertrand Russell to be one of the founders of British neo-realism and neopositivism.

The full name of the boy, who appeared in the family of aristocrats on May 18, 1872, is Bertrand Arthur William Russell. He was born at Ravenscroft, Trellech, Monmouthshire. The child’s father was the son of the British Prime Minister and the leader of the Whig Party. Relatives of the future philosopher distinguished themselves with their education and status in society. Liberalism was bred in the bones of the Russells, who openly spoke about issues of war and peace.

Russell's father, Lord Amberley, was one of the pioneers of pacifism, which theory was created in the 19th century and became popular in the 20th century. Bertrand became an active advocate of the views and ideas of his father. His mother was also an associate of liberalism and defended the rights of women wherever possible. It invoked the wrath of Queen Victoria.

Bertrand Russell's parents passed away when he was two years old. Then her sister died. Together with his two older brothers, the boy was placed in the care of his grandmother, the Countess. She provided her grandchildren with an excellent education thanks to foreign tutors. Aristocratic education, an extensive library, and gifted teachers shaped the world perception of the children. Bertrand showed an interest in mathematics and often declared to a religious grandmother that he adhered to an atheistic position. In 1889, at the age of 17, Bertrand became a student of Trinity College, Cambridge.

In 1894 he earned a bachelor of arts degree. Inspired by George Edward Moore’s analytic works, Russell investigated empiricism based on the books of John Locke and David Hume. In 1895, Bertrand became a member of the scientific community of the college, and in 1897 he completed his thesis entitled "An Essay on the Foundations of Geometry."

Having graduated, Russell became the honorary attache of Britain and went on a business trip to Paris. Then he visited Berlin, where he collected material for the debut work "German Social Democracy," published in 1896. Later, he visited the USA and returned to England, where Bertrand Russell collected his Cambridge lectures in his book “A Critical Exposition of the Philosophy of Leibniz."

In 1900, Bertrand Russell, together with a Trinity College teacher, Alfred Whitehead, became a member of the International Congress of Philosophy in Paris. He read the works of the philosophers, Gottlob Frege and Giuseppe Peano, who studied symbolic logic, and created his book "The Principles of Mathematics." It was published in 1903. The work made Russell famous.

The author continued the study of connection of mathematics with logic from 1910 to 1913 and then published a three-volume book “Principia Mathematica," co-written with Whitehead. The scientists have stated that philosophy defined all natural sciences, and logic was the foundation of any research. They separated philosophy from ethics and theology, making it the basis for the analysis of the phenomenon. Russell and Whitehead emphasized empirical knowledge because it helped to achieve the truth, while everything else remained subjective and doubtful.

Later, Russell continued his thoughts on the empirical knowledge and concluded that this was the only way to know the truth. In 1904, he lectured at Harvard and then published a separate book of these lectures. The scientist recognized the existence of contradictions in logic and began to talk about the role of hypotheses and the argumentative experience in philosophy.

Russell paid attention to politics. Together with his wife, a member of the Fabian Society and an associate of socialism, he fought for equal women's political participation. In 1910, Bertrand stood as a Labour Party candidate at the parliamentary election. People did not support him because there were few followers of the scientist's views in society, and his attitude toward religion contradicted the current situation.

Since 1916, Russell was a member of the organization "Resistance to Military Service" and wrote the book "Principles of Social Reconstruction," "Justice in War-time," "Political Ideals," etc. His works did not attract attention until the philosopher was fined and imprisoned for a pamphlet against prison sentences for refusing to serve in the army.

Bad reputation led to the dismissal from Trinity College, where Bertrand was a lecturer. His library was sold to pay off a fine, and the government prohibited the right to come to the USA for lecturing at Harvard.

Russell did not abandon his views and went to Brixton Prison for critical rhetoric in 1918, where he wrote “Introduction to Mathematical Philosophy." The 1920s were marked by the publication of "The Analysis of Mind," "The ABC of Atoms," "The ABC of Relativity," and "The Analysis of Matter." The socialist views of the scientist were reinforced after getting acquainted with Trotzky, Gorky, and Lenin in 1920.

Having visited the Soviet Union, Russell criticized the regime in the book “The Practice and Theory of Bolshevism." During the subsequent journey to Asia, he had an opportunity to lecture at Peking University and created an essay The Problem of China. From 1924 to 1931, the scientist taught in the USA.

At that time, he was interested in international issues. The author incorporated his thoughts in the books “Freedom and Organization, 1814–1914”, “Which Way to Peace?”, “Power: A New Social Analysis." Since 1935, Bertrand Russell lived in America and lectured at universities in Chicago and California. His pacifist beliefs were criticized when the Nazi invaded Poland in 1939.

The scientist advocated a military reaction; thus, he was not popular in the United States. He was hardly accepted by clergymen and members of the City Council who were forced to respond to the appointment of Russell as a professor of philosophy at City College of New York.

In 1944 Bertrand Russell returned to his native Trinity College and continued his journalistic activities. His lectures were broadcast by radio, and he won the Order of Merit. He was awarded the Nobel Prize in literature for "Unpopular Essays," published in 1950. Russell did not use the opportunity to make a formal speech while receiving the award.

The peace advocate and philosopher participated in demonstrations and was a speaker at various thematic conferences. The Russell-Einstein Manifesto helped to create the Pugwash movement of scientists. Since 1954, he advocated nuclear disarmament, because at that moment tests of the hydrogen bomb were underway. Russell was a member of the disarmament movement and the Committee of 100.

In 1959, he openly declared his position in an interview with BBC. He even went to prison for his highly critical speech near the Parliament. In 1962, Russell wrote to heads of state, John Kennedy and Nikita Khrushchev, about the need for peace negotiations on the Caribbean crisis.

Having withdrawn from the Committee of 100 in 1963, the philosopher focused on the work of the Atlantic Peace Foundation and his own organization opposing the nuclear arms race. He gathered an anti-war commission with the support of other public figures. The organization publicly accused the United States of the Vietnam massacre. Russell opposed intervention, and also condemned the invasion of Czechoslovakia in 1968.

It seems that the biography of Bertrand Russell was connected only with scientific and socio-political activities, but the philosopher did not forget about his personal life. Researchers include his name in the list of famous lovers of the last centuries, and there is evidence of this. The writer was married four times and had a large number of mistresses.

Russell’s first wife was Alys Smith, whom he met at Trinity College during his student years. At the age of 22, Bertrand married Alys, but they had a different perception of family life. The illusion of a happy marriage created by the spouses collapsed when Bertrand fell in love with the wife of his colleague, Whitehead. The love affair led to divorce, and in 1910 the heart of the scientist was filled with love again. He liked Ottoline Morrell, the wife of a member of parliament. They were in correspondence, but soon relations ended, and Russell discovered the world of new love affairs.

In 1914 in the USA Bertrand met the surgeon’s daughter, Helen Dudley, and invited her to visit England, but before the young woman came, he had already been in a relationship with Irene Cooper Ullis. In 1916, he was stunned by married actress Constance Malleson and became her lover. They had relations for 30 years.

In 1921, the philosopher married Dora Black, the secretary who accompanied him on a trip to Russia. She gave birth to a son and daughter. While choosing a school for the children, the couple decided to create their own educational institution, established in 1927. He expressed his thoughts concerning marriage and family of that period in the book Marriage and Morals.

Russell and Black’s marriage was short. The scientist became interested in young Joan Folwell and was in a relationship with her for three years. In 1936, he married the teacher of his children, Patricia Spence. They had a 40-year age difference. The family lived in the USA. The woman gave birth to a son, but this marriage was not the final stage in the writer's personal life.

In 1952, he divorced his wife because he had relations with writer Edith Finch. They had common social and political views, participated in demonstrations together, traveled around Europe and were engaged in anti-war activities.

Unlike many followers of the theory of free love, Bertrand Russell did not hide his thoughts, which was clear from the statements and quotes in his books. Being an advocate for truth and trust in relationships, he was honest with his lovers, so he spent the last days of life as a happy man. Over the last years, Bertrand Russell lived in North Wales, interacting with children and grandchildren.

The scientist died on February 2, 1970. The cause of death was the flu. The immunity of the elderly philosopher did not cope with the disease.

The writer's legacy includes many works in which he investigated the history of philosophy, and the photos of the scientific and public figure appear on the pages of modern educational editions. 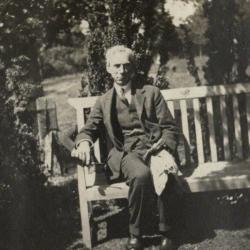