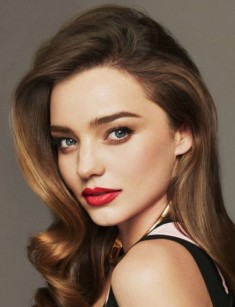 Miranda Kerr is a model of the Australian origin, who has become famous for the fact that since 2007 till 2013 she cooperated with Victoria's Secret company and was one of the brand’s "angels."

Miranda May Kerr who is better known to the public as Miranda Kerr, was born in Sydney in April of 1983. But in a short time, the parents with their little daughter moved deep into the province of New South Wales. Here the family settled on the horse farm. So children's memories of Miranda are connected with these animals.

Miranda Kerr has roots of different nations. She has English, Philippine, Scottish, and French blood in her veins – such a colorful "cocktail" has been brightly reflected in the girl’s character. Miranda turned out to be a temperamental and purposeful child and beautiful as well.

However, Miranda Kerr didn't dream about the modeling. At the age of thirteen, the girl chose for herself a serious profession of the nutritionist. Though, the destiny was elsewhere and changed the plans of the beautiful young girl.

It was the girl's gorgeous model appearance, that defined the future biography of Miranda. Once the girl tried herself in Australian nation-wide model competition. Unexpectedly for herself, Kerr became the winner of this competition. Then the girl hardly turned fourteen years old. The organizers of the competition held the shooting for the girls, and soon her photos appeared in one of the glossy magazines.

Miranda’s success was tremendous, though it was a little bit scandalous. It seemed to the moral observers that the photos of the minor girl in a swimsuit looked like pornography. Miranda Kerr objected herself to that saying that Dolly magazine in which the photos appeared was intended for teenage girls and not for the adult men.

After the "scandalous" photo shoot Miranda Kerr at once became famous. Guru of the fashion-industry publicly glorified "angelic" beauty of the dear young thing. It is not surprising that the beauty at once received an attractive offer from the model agency in Melbourne and became a part of the team. At that time Miranda only had a diploma of the high school.

Cooperation with Chic Management Sydney Division model agency became the next step in Miranda Kerr’s career. This organization opened the doors for the Australian model to the popularity behind the borders of her country. Kerr has become famous in Japan. But Miranda managed to gain true popularity only after she began to advertise Billabong sportswear.

In 2007 Miranda Kerr cooperated with such well-known brands as Clinique (Kerr is a face of this company), Arden B, Roxy, and Tigerlily. In Australia, the girl has become extremely popular. But she gains international popularity after the trip to the USA. After a couple of displays on the podiums in New York Kerr was offered to sign the contracts with world famous brands, such as John Richmond, Anna Molinari, Roberto Cavalli, and Blumarine Swimwear.

But Miranda’s major achievement is her collaboration with Victoria's Secret. The trademark on the production of women lingerie has become popular for their models – Victoria’s Secret "angels" who during annual fashion parades appear on the podiums wearing the wings. The girls for this category are chosen each year on the special displays. Only a few of them are honored with such a position. But those who receive the happy ticket are going to be successful and recognized. Regularly the models from the list of the "angels" are included in the lists of Forbes edition. The records were set by Adriana Lima with the income of $9 million and Candice Swanepoel and Alessandra Ambrosio – with the fees of $5 million.

In 2007 in New York the model for the first time appeared on the podium, advertising the underwear of this brand. Kerr’s parameters ( she is 175 cm high and weighs 49 kilos) let her undress in front of the cameras to advertise lingerie. Miranda has become the "angel" of this brand. She has become the only Australian model of this company. After a year of work in this company, she became one of the ten most highly-paid models in the world. Miranda cooperated with this brand for six years after what she broke the contract.

It seems that Miranda Kerr’s photos appeared everywhere: on the covers of fashion tabloids, on advertising billboards, in the music videos of Kanye West and Pharrell Williams. The girl even tried herself as an actress in the popular American sitcom How I Met Your Mother.

In the autumn of 2009 the model presented her line of organic cosmetics called Kora Organics. During for year, the pharmacists developed the products of organic origin which are ideally maintained mineral and water balance of the facial skin. By the words of Miranda, she tested all the cosmetic products herself and was selecting the ideal combination of the creams. The Noni plant became the basis of Kora Organics cosmetics. The girl learned about it from her grandmother and since then regularly uses it for beauty procedures.

It's noteworthy that for all these years of world recognition Miranda Kerr hasn't accepted the offers which she repeatedly received to take the nationality of the foreign country. Till present the girl is Australian.

The world-famous model had many love affairs in her life, and each of them was closely watched by millions of the admirers of the beautiful model. In 2003 Miranda had relations with the broker Adrian Camilleri. But a year later the young people broke up. Miranda's boyfriend was accused of the black financial operations, and according to some rumors he also involved Kerr in this.

In a couple of years after the separation, Miranda began a new love affair. That time she began engaged in the relations with the musician Jay Lyon. The girl appeared in the video created on the song Everything To Me. Their relations came to an end in 2007. Then there followed the relationship which has become the brightest one in Miranda Kerr’s life.

The handsome actor Orlando Bloom who is a dream of every second girl on earth has become the spouse of the Australian model. The rumors about the romantic relations of Miranda Kerr and extremely popular actor appeared in the first half of 2008. The journalists and millions of fans were closely watching the love affair which was developing during two years and resulted in the marriage.

In 2011 Miranda gave birth to their firstborn Flynn. The birth of the child hasn't become an obstacle to the development of the model's career. Right after the son's birth, Miranda took part in the shooting for Harper's Bazaar magazine. At the same time, the girl was wearing only the towel on her head and shoes Dolce & Gabbana shoes.

In October of 2013, Miranda Kerr began to have problems in her private life. The couple broke up.

In 2015 at the model began a love affair with the billionaire Evan Spiegel, an Australian by his origin. At the end of May of 2017, they got married. The wedding of Miranda Kerr and Evan Spiegel has held the backyard of the personal mansion of her groom in Brentwood secretly. The guests arrived at the ceremony in the cars with completely tinted windows. The number of relatives and close friends was no more than fifty people. Before the official part of the ceremony, the future spouses signed the marriage contract under which in case of the divorce Miranda couldn’t claim to Evan's property. In case of a future happy life in the marriage Kerr won’t be limited in expenses.

The dress for the ceremony was designed by Maria Grazia Chiuri, the chief designer of Dior Fashion House. It was a sateen long-sleeved dress with gentle embroidery in the classical style which reminded the fashion of the wedding dress of the actress Grace Kelly. Evan was wearing a black suit with the tailcoat. Miranda published their wedding photos on her Instagram page one and a half months later after the ceremony.

After the young people exchanged their rings the bride burst into tears. By the words of Miranda till the wedding, they didn't have intimate relations as it is supposed to be.

In October of 2017 Forbes magazine updated the information about the wealthiest citizens of the world. In the rate list, Evan Spiegel wealth was estimated at $3.1 billion, exactly as much as the wealth of the U.S. President Donald Trump. The saturated year demanded huge investments from the head of the government. During the election campaign, Trump lost $600 million what influenced the rates of the billionaire.

At present Miranda Kerr continues to develop her own cosmetic line and regularly posts advertising videos with the use of Kora Organics on her account in Instagram. Moreover, the model shares her secrets of the ideal body with her fans. Miranda achieves model parameters by with the help of 80 to 20. Her nutritionist has developed this diet for her. The food ration includes 80% of dishes cooked with useful products and 20% of others, excluding fast carbohydrates.

Miranda remains true to the model profession. At the end of October the model posed in the image of Marilyn Monroe, and in November one could see Miranda Kerr on the cover of Australian Harper's Bazaar edition. 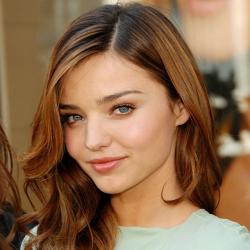